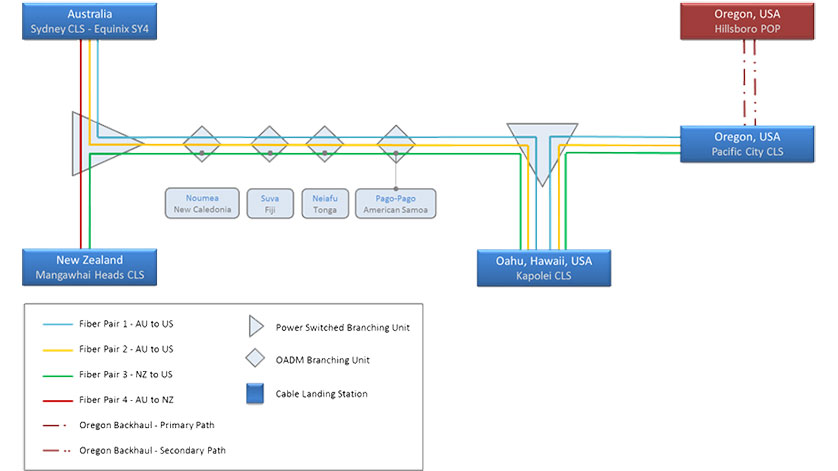 Hawaiki Submarine Cable LP and TE SubCom, a TE Connectivity Ltd. company, announced that new milestones have been reached in the manufacturing of Hawaiki, the 14,000 km transpacific cable system that will link Australia and New Zealand to the mainland United States, as well as Hawaii and American Samoa, with options to expand to several other South Pacific islands.

The manufacturing progress, as well as continued advancement with the installation permitting process in New Zealand, Australia and the U.S., keeps Hawaiki on schedule for completion by mid-2018.

Hawaiki will be the highest cross-sectional capacity link between the U.S. and Australia and New Zealand. As a carrier-neutral cable system, Hawaiki will usher in a new era of international connectivity benefitting businesses and consumers across the Pacific region. The system was co-developed by New Zealand-based entrepreneurs Sir Eion Edgar, Malcolm Dick and Remi Galasso.

“We’re very close to completing the manufacturing stage of Hawaiki and are preparing to launch installation in just a matter of months,” said Remi Galasso, CEO of Hawaiki. “Once live, this cable system will help eliminate the distance between all Pacific communities and provide an economic boost to a region consistently starved for broadband access.”

“As expected, our manufacturing team has made rapid progress on Hawaiki,” said Debra Brask, vice president, project and program management, TE SubCom. “Each stage of the Hawaiki cable system project has proceeded without issue and we’re looking forward to an on-time delivery in mid-2018.”