From Brazil to Africa in the Blink of an Eye 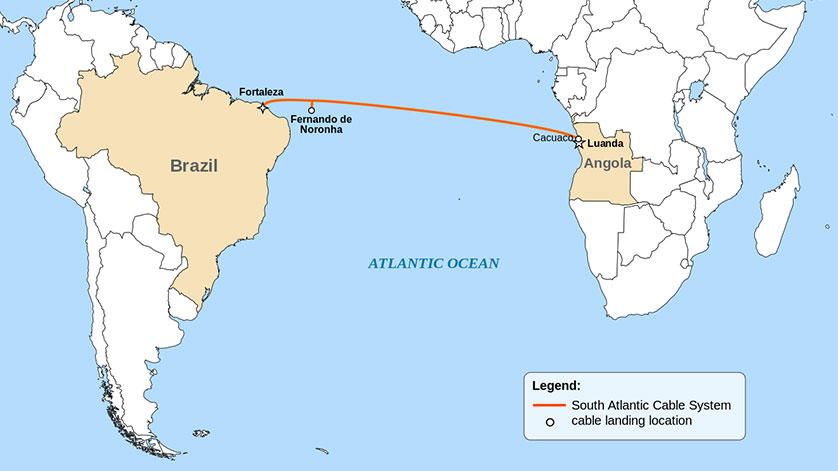 Angola Cables, a telecommunications multinational, has reported that the South Atlantic Cable System (SACS) has made landfall at Fortaleza on the Brazilian coast, making it the first fiber line connecting Africa and South America. The installation of SACS was made on 23 February in the city of Fortaleza. The cable is entering its final phase of completion and is expected to go live by September 2018.

It will have an initial capacity of 40 Tbps and will provide direct internet connectivity between the two continents and onwards to the United States. There will then be significant improvement in communications and content sharing between Angola, African countries and the Americas. Latency will be reduced fivefold from the current 350 thousandths of a second to just over 60 thousandths of a second.

The project distance of about 6000km may seem like a long way to go, but it’s still much shorter than the distance of an equivalent satellite link, and faster. Angola Cables CEO, António Nunes said, "Once SACS has been fully commissioned, we will see a significant improvement in communications and content sharing between Angola, African countries and the Americas."

Developing onward high capacity connectivity for SACS has been crucially important. Ocean Specialists, Inc. has been imbedded with the Angola Cables network development and executive teams. After successfully identifying and developing key strategic partnerships on behalf of Angola Cables, OSI is has led the partner working committees, network and technology assessments, and landing station vetting and selection. OSI oversees all construction, installation, commissioning and initial operations and management processes on behalf of Angola Cables during the life of the project.

“Investments made by Angola Cables and its partners in underwater cable systems, such as the West African Cable System (WACS) and MONET – connecting North and South America – combined with other investments in terrestrial infrastructure such as data centers, is opening up global communications networks. It is also reorienting worldwide internet traffic and is effectively positioning Angola as a telecommunications hub in sub-Saharan Africa." concluded Nunes.

MONET is being developed to coincide with the delivery of SACS, thereby providing much needed Transatlantic capacity capable of linking Africa, India and Asia to North America via the Southern Hemisphere.

The fiber-optic cable was supplied by Japan’s NEC, with France’s Orange Marine laying it on the ocean bed. Angola Cables is 51 percent-owned by the Angolan government. Founded in 2009, the company has ownership of two other submarine cables, namely Monet and WACS, that connect to North America and Europe respectively. For more information, click here.