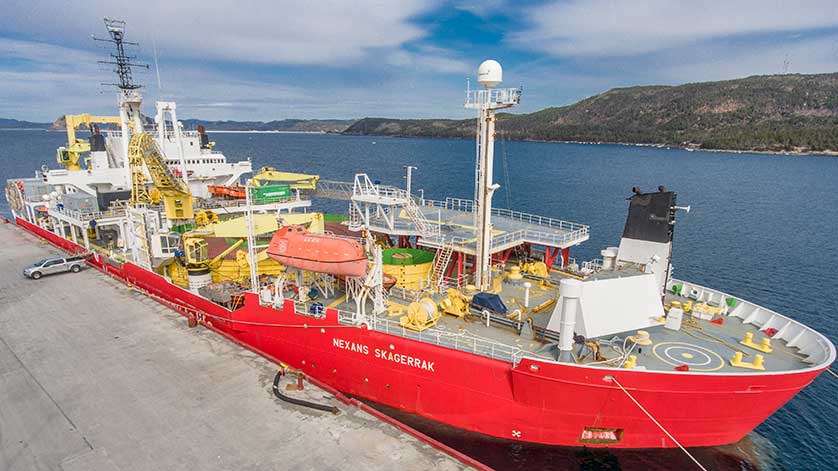 The arrival of the Skagerrak, operated by the cable supplier Nexans, marks the start of the submarine cable installation process. Over the next few weeks members of Nexans’ highly specialized crew will prepare for the installation of the first electrical connection across the Cabot Strait between Nova Scotia and the island of Newfoundland.

Throughout the various stages of the manufacturing process and transport of each cable, members of Emera Newfoundland & Labrador’s Marine Team have been monitoring and inspecting the progression to maintain quality assurance.

“The arrival of the submarine cables is the result of more than three years of dedication to safety and quality by our team,” says Rick Janega, President and CEO, Emera NL. “Throughout the manufacturing process, the successful testing phase and the transportation of cables, the team’s commitment continues to be the driving force of our success to date. This brings us another step closer to the completion of the Maritime Link Project later this year.”

Nexans used two facilities for cable manufacturing, allowing both cables to be produced at the same time. The cable manufactured in Futtsu, Japan, was spooled onto a giant barge in early April, and then loaded onto a heavy lift vessel (HLV) for the long journey to the Cabot Strait to await installation.

The HLV carrying the second submarine cable from Japan will take approximately six weeks to travel to the port in Sydney, Nova Scotia. It will travel across the Pacific Ocean, through the Panama Canal and then up the Eastern Seaboard. Expected to arrive in mid-May, it will be loaded onboard the Skagerrak once the first cable is installed. Installation of both submarine cables is expected to be completed by late summer.