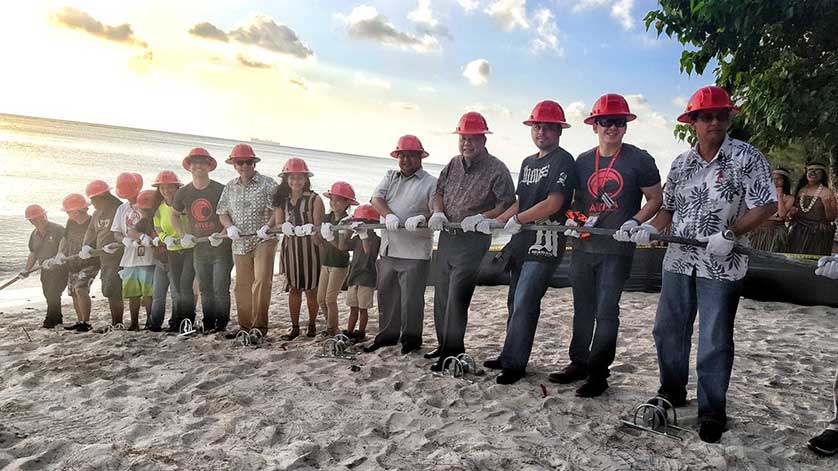 Docomo Pacific announced the start of the marine lay for its ATISA submarine fiber-optic cable system connecting Guam, Saipan, Tinian and Rota in the Mariana Islands.

On May 11th, Docomo Pacific hosted a landing ceremony for ATISA at Aquarius Beach, Saipan. Members of Docomo Pacific’s leadership team were joined by island dignitaries and business leaders for the event. Similar landing ceremonies will take place in Tinian and Rota later this month. Following the marine lay, Docomo Pacific’s team will conduct end-to-end testing of the cable system before ATISA is ready for full service in the Marianas by August.

The marine lay began on Guam on May 6th following the arrival of the CS Responder, the vessel that will perform the physical cable installation between Guam and the CNMI. Honored guests and island media were given the opportunity to tour the vessel and learn about the marine lay process from project managers.

With ATISA, the world class services Docomo Pacific provides to customers on Guam will become available to the entire CNMI. This means the people of the Marianas can look forward to internet speeds up to 100 Mbps and mobile 4G LTE services. Along with reliability, our mobile network will provide extensive coverage allowing you to have a great experience where you live, work, and play. These upgrades will allow consumers to stream, download and upload faster than ever before. Docomo Pacific offers the services of the award-winning television entertainment system TiVo, the option of over 200 cable TV channels, fixed line telephone and an array of enterprise solutions.

“The cable landings in Guam and the CNMI are a major step toward the launch of ATISA. We are ready to raise the level of communication and improve the entertainment experience in the CNMI. ATISA is more than just a commercial venture, but will offer choice to the people of the Marianas and a range of new, innovative services in mobile, TV, online and digital phone,” said Dino Manning, General Manager-CNMI, Docomo Pacific.

In 2016, Docomo Pacific signed a significant agreement with NEC Corporation and the governments of the CNMI and Guam to bring this project to life. NEC is contracted to build ATISA.

“NEC has a long history of supplying submarine cable systems in the region and we are proud to share this milestone with Docomo Pacific today. As the cable laying work begins, we look forward to seeing the transformation of communications connectivity between Guam and the CNMI,” said Hiroshi Kawakami, Project Manager, NEC Corporation.

“OSI has appreciated the focus and drive with which the Docomo Pacific team has led the project. We are certain the network will bring significant benefits to the Marianas,” said Tony Mosley, Director of Asia Pacific, Ocean Specialists Inc.