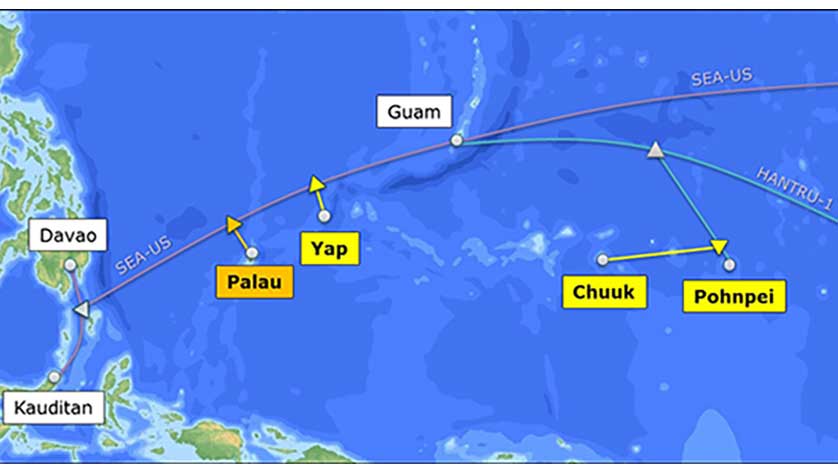 The Palau Spur interconnects with the existing SEA-US submarine cable (which connects the Philippines and Indonesia to the west coast of the United States via Guam and Hawaii) from a branching unit located between the Philippines and Guam. The Palau Spur has an initial design capacity of 500 Gigabits per second (Gbps), using NEC's state-of-the-art 100Gbps technology. The new submarine cable will connect the Republic of Palau to Guam and onward connectivity to Asia, North America and the rest of the world.

The President of the Republic of Palau, His Excellency E. Tommy Remengesau, Jr. declared BSCC open for business at a Ready for Service celebration held at the National Museum in Koror, Palau."

This marks the completion of critical national infrastructure, that has already made its presence felt in improved services, and will continue to support the sustainable development of Palau long into the future as technologies evolve," the President remarked.

BSCC Board Chairman, George Rechucher, said, "BSCC is proud to have partnered with NEC to deliver a world class international submarine network on time and under budget."

"NEC is honored to have been selected as a partner for this significant project for the Republic of Palau and it is with deep pride that we hand over the keys to launch the new submarine cable link to the BSCC and the people of Palau," said Mr. Toru Kawauchi, General Manager of NEC's Submarine Network Division. "Yesterday, this island nation was still dependent on satellite communications, but from today, this new cable will bring information at the speed of light, improving the quality of life for those living in and traveling to Palau."