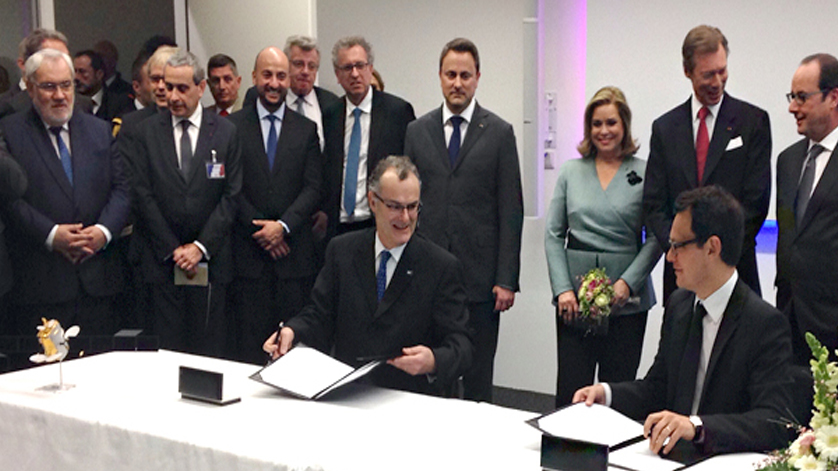 The contract signing ceremony was held at SES headquarters in Betzdorf, Luxembourg. It was attended by French President François Hollande, His Royal Highness Henri, Grand Duke of Luxembourg, and Xavier Bettel, Prime Minister of Luxembourg.

SES-15 will be launched by an Ariane 5 during the second quarter of 2017 from the Guiana Space Center, Europe's Spaceport in Kourou, French Guiana.

Arianespace and SES have developed an exceptional partnership that reaches back more than 25 years. SES-15 marks the 41st launch contract signed by Arianespace with the SES group (Euronext Paris and Luxembourg bourse: SESG). SES-15 is also the second SES satellite with all-electric propulsion to call on an Arianespace launch, following SES- 12 in January 2015.

Weighing 2,300 kg at launch, SES-15 will be located at 129° West, a new orbital position enabling SES to provide services to North America. SES-15 will carry a hybrid payload, with additional Ku-band wide beams and Ku- band as well as Ka-band High Throughput Satellite (HTS) capability. The satellite will be equipped with an electric propulsion system for orbit raising and in-orbit maneuvers. Offering a design life of 15 years, this multi-application satellite will also provide extended capacity and coverage over the main airline routes across the continent, as well as other traffic intensive data applications, such as governments, VSAT networks and the maritime sector.

Following the contract signature, Arianespace Chairman and CEO Stéphane Israël said: "SES has chosen Arianespace for the second time since the beginning of the year to launch one of its satellites. These contracts include both fleet renewal, with the SES-12, and fleet expansion, with the SES-15. These two all-electric satellites, the first in the SES fleet, confirm the technology trend now shaping the telecom satellite sector. SES's continued trust in Arianespace also shows that Ariane 5 addresses the resulting requirements. I would like to personally thank SES for reenergizing our long-standing partnership, reaching back over a quarter of a century, with this 41st contract between our companies. We are especially proud to be able to announce this contract in a ceremony attended by the French and Luxembourg highest authorities."