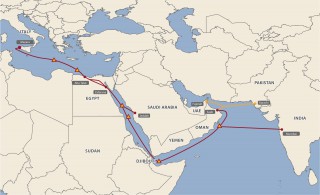 APTelecom has been engaged by Middle East and North Africa Submarine Cable System (MENA-SCS) to assist with international sales and the commercialization of a new submarine cable system known as MENA Cable, connecting Europe to Middle East and India.

The MENA cable system is independent of other builds in the region and is, according to APTelecom, set to become the primary route for those seeking connectivity between Europe and Asia.

The MENA cable system spans three continents (Europe, Africa and Asia). Currently the cable lands in five countries: Italy, Egypt, KSA, Oman, India, and in conjunction with TW1 cable to UAE and Pakistan. The cable also includes branching units to cover further expansions to Europe, Levant and East Africa. It consists of five fiber pairs, each pair expandable to 8 TB/s totaling to an ultimate capacity of 40 TB/s. MENA cable length is 9,030km of which 930km is a terrestrial fiber cable crossing Egypt.

As part of the remit, APTelecom will assist MENA-SCS with the commercialization aspects of their network. “We are honored to be a part of such an important project in one of the world’s fastest-growing telecom markets and working within the MENA-SCS team to help bring their plans to fruition,” said Sean Bergin, Co-Founder and President of APTelecom and Advisory Council Member of the Pacific Telecommunications Council (PTC).

Beshr Chamssi, Chief Commercial Officer of MENA-SCS, stated: “We are pleased to play a major role in the development of this new connection between Europe , Middle East and India affording a roll-out of the applications needed to meet carriers’ voracious demands for bandwidth over the next decade.”