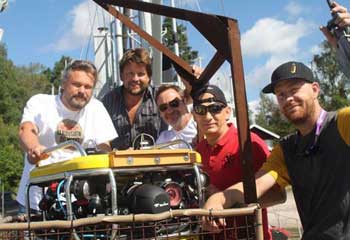 Ocean X Team’s main focus is to search for hidden treasures such as antique high-end alcoholic beverages and historic artifacts. They started their wreck career by finding an American B-17 bomber in 1992 off the Swedish east coast.

In 1994 Peter Lindberg found information about a ship wreck loaded with champagne and cognac in local court archives. This information led to the great find of the small schooner “Jönköping” in 1997 and salvage in 1998. 2400 bottles of Heidsieck & Co MONOPOLE Gôut Americain 1907 champagne where recovered from the wreck and raised world record prices when sold at Christie’s auction house in London. Ocean X Team has participated in many wreck projects and salvages since 1992, one of which is the newly found 20-meter long, 3.5 meter wide Russian mini-submarine from World War one.

The dimensions described by Ocean X Team are similar to that of the Som (Catfish), a Russian submarine lost in 1916 after colliding with a Swedish steamer in the Baltic Sea. The submarine was built in the Unites States in 1901 before being handed over to the Russian Navy in Vladivostok in 1904 and was then integrated into the Baltic Sea Fleet. The Som class submarine was designed to be easily transported by railroad train cars. 7 submarines of the Som class were delivered to the Imperial Russian Navy between 1904 and 1907.

The located submarine is allegedly the last of the fleet of 7 located and is the only one not scuttled.

“The submarine is completely intact, has no visible damage to the hull and the hatches are closed. Therefore we fear that the crew have not been able to save themselves when the sub went down,” says Stefan Hogeborn, a diver with Ocean X Team.

How did Ocean X Team find it?
The submarine was found on the bottom of the Baltic Sea, 2,750 meters outside the Swedish coast in July 2015 during a large area search using side scan sonar to locate any out of the ordinary targets in the area. When the submarine was located, the Ocean X team launched a remotely operated vehicle (ROV) to investigate the target.

Ocean X Team used equipment from one of the world’s leading manufacturer of 2D forward looking sonar technology, Teledyne BlueView. Due to its dual frequency technology the pilot was able to navigate the sonar installed on an ROV efficiently to the target while collecting sonar recordings, taking accurate measurements and keeping aware of the surroundings. In very low visibility conditions the ROV has difficulty searching for targets and navigating to the targets of interest without sonar technology. The 2D forward looking sonar provides real time navigational imagery increasing the usability, efficiency and capability of the ROV when searching for targets of interest.

After identifying the location of the wreck, inspecting the wreck with the ROV and sonar the Ocean X dive team went in to conduct hands on inspection of the submarine. Using a diver handheld imaging sonar device that contains a 2D forward looking sonar, the divers were able to locate the submarine quickly after descending the 87 meters to the bottom.

Efficiently locating the wreck is crucial because of the limited bottom time at these extreme depths. By quickly locating the wreck once on bottom the dive team has more time investigate the submarine for identifying markings and evidence of damage that lead to the sub’s sinking. Divers with increased awareness of their surroundings can make decisions that increase safety and improve their capabilities at dive locations.