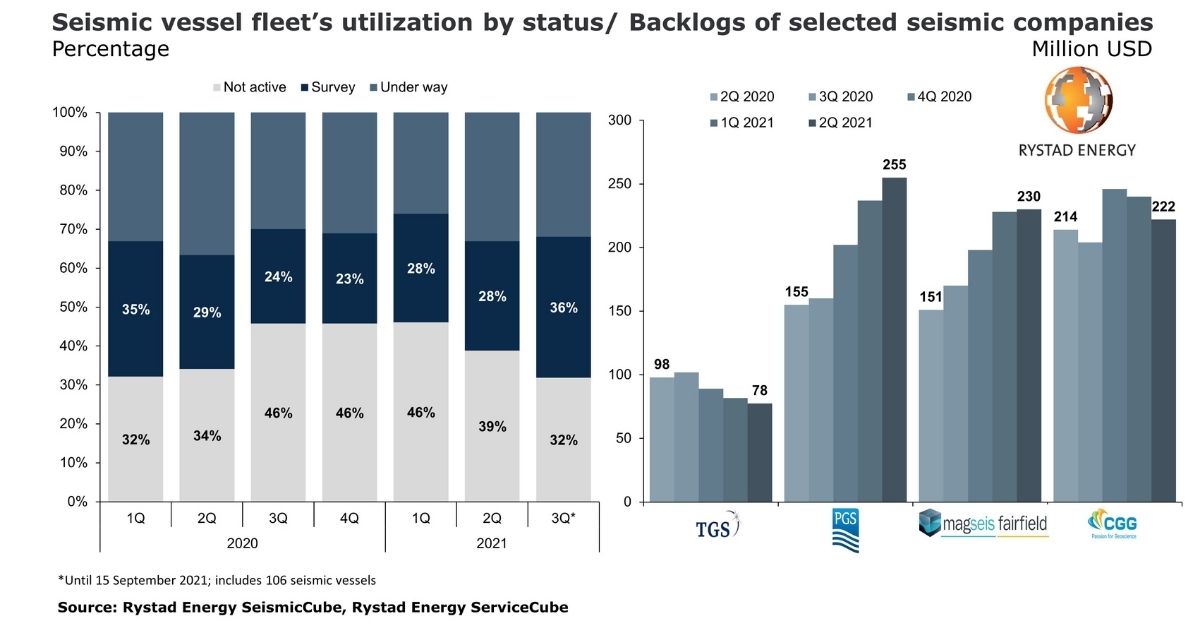 The Covid-19 pandemic has been devastating for the seismic industry for several quarters, keeping nearly half of its global fleet inactive – until recently.

A Rystad Energy report shows that the seismic fleet’s hibernation is now over, as vessel utilization has recovered to pre-Covid-19 levels in the third quarter of 2021. About 68% of the fleet, or just over two-thirds of the vessels are now surveying or under way, while only one-third remain inactive.

The fleet’s comeback is significant as it matches the utilization levels of the first quarter of 2020, before the seismic industry was hit by the pandemic-induced slowdown. The worst time for the fleet was from the third quarter of 2020 through March 2021, when 46% of the global fleet was inactive (either standby in port or stacked).

In fact, in August 2021 Rystad Energy monitored the lowest monthly percentage of inactive vessels in almost two years, with only 29% of the fleet inactive. The last time the seismic fleet was so active was in October 2019, when only one-quarter of the fleet was standby or stacked.

Rystad Energy monitors the activity of 106 seismic vessels, which represents about three-quarters of the global fleet, including most major service providers and vendors that offer vessels for seismic jobs. The selection is representative of the seismic market conditions and acts as a good indicator of global seismic vessel utilization, among other metrics. The vessels that are excluded belong to smaller companies and are located in regions with low data reliability for safe market trend projections.

“The current increase in seismic vessel utilization is partly driven by exploration, with a focus on proven basins. We also see that many seismic companies have repositioned themselves for the energy transition and are taking up contracts in other energy services such as carbon capture and storage, geothermal, offshore wind and deepsea mining,” says Binny Bagga, energy service research Vice President at Rystad Energy.

The contract backlogs of many seismic companies grew at decent levels through mid-2021, giving them enough activity to support operations through the rest of the year. Rystad Energy expects the performance of seismic players as a whole to improve as global exploration spending is forecast to increase at a modest pace in 2022 – at a time when many players are exiting the seismic industry and others reposition their operations for the energy transition.

The uptick in activity ahead was also indicated in the second-quarter reports of some seismic players.

Recent activity in the current quarter includes a partnership between PGS and asset-light seismic player TGS for the Phase 2 Lewis Hills multi-client seismic program off eastern Canada, covering 947 square kilometers of 3D data. TGS also began a new 2D seismic campaign off Mauritania. The latter project has a 60-day acquisition timeline and is being undertaken using the BGP Pioneer vessel. TGS also announced two new technology pilot projects, for CCS and offshore wind, in collaboration with Magseis Fairfield. The projects will use 3D seismic acquisition in Norway and Denmark. Operations are currently being undertaken in Norway by the Sanco Spirit vessel.

PGS is close to being fully booked for the current quarter and has good contract visibility for the fourth quarter. The company deployed two of its vessels – the Ramform Atlas and Ramform Titan – to expand its multi-client coverage off Canada. It also deployed the Ramform Vanguard to acquire a multi-client survey on the Kraken field in the UK North Sea.

In partnership with PetroCi and Direction Generale des Hydrocarbures, PGS also completed phase two of the Cote d’Ivoire MegaSurvey and added 9,897 square kilometers of 3D and 24,632 line kilometers of 2D in the Tano Basin off West Africa. In its contract seismic division, the company completed the data acquisition for Lundin Energy and partners in PL 1083 in the Barents Sea off Norway in mid-August using the Sanco Swift and Ramform Hyperion vessels.

Shearwater GeoServices continued to acquire 3D and 4D seismic data for Petrobras using its SW Empress vessel at the Marlim, Albacora and Voador fields in Brazil. The company also began the deepwater ocean bottom node seismic acquisition for Petrobras’s Tupi and Iracema projects in the Santos Basin off Brazil. The surveys are expected to take around nine months and are being carried out by its SW Diamond vessel. Shearwater received a six-month project extension from CGG Veritas on the Nebula survey in Brazil’s Campos and Santos basins, which increased the contract backlog for its Ocean Sirius vessel. In Australia, the company performed a 3D multi-sensor marine seismic survey in the Otway Basin with its Geo Coral vessel.

The current market activity is very promising for the seismic industry and is a good indication that seismic players are set to remain relatively busy next year – giving the segment a much-needed boost after several quarters of reduced operations and revenues, Bagga concludes.