Police and Dive Companies Find Many Uses for Side Scan Sonars 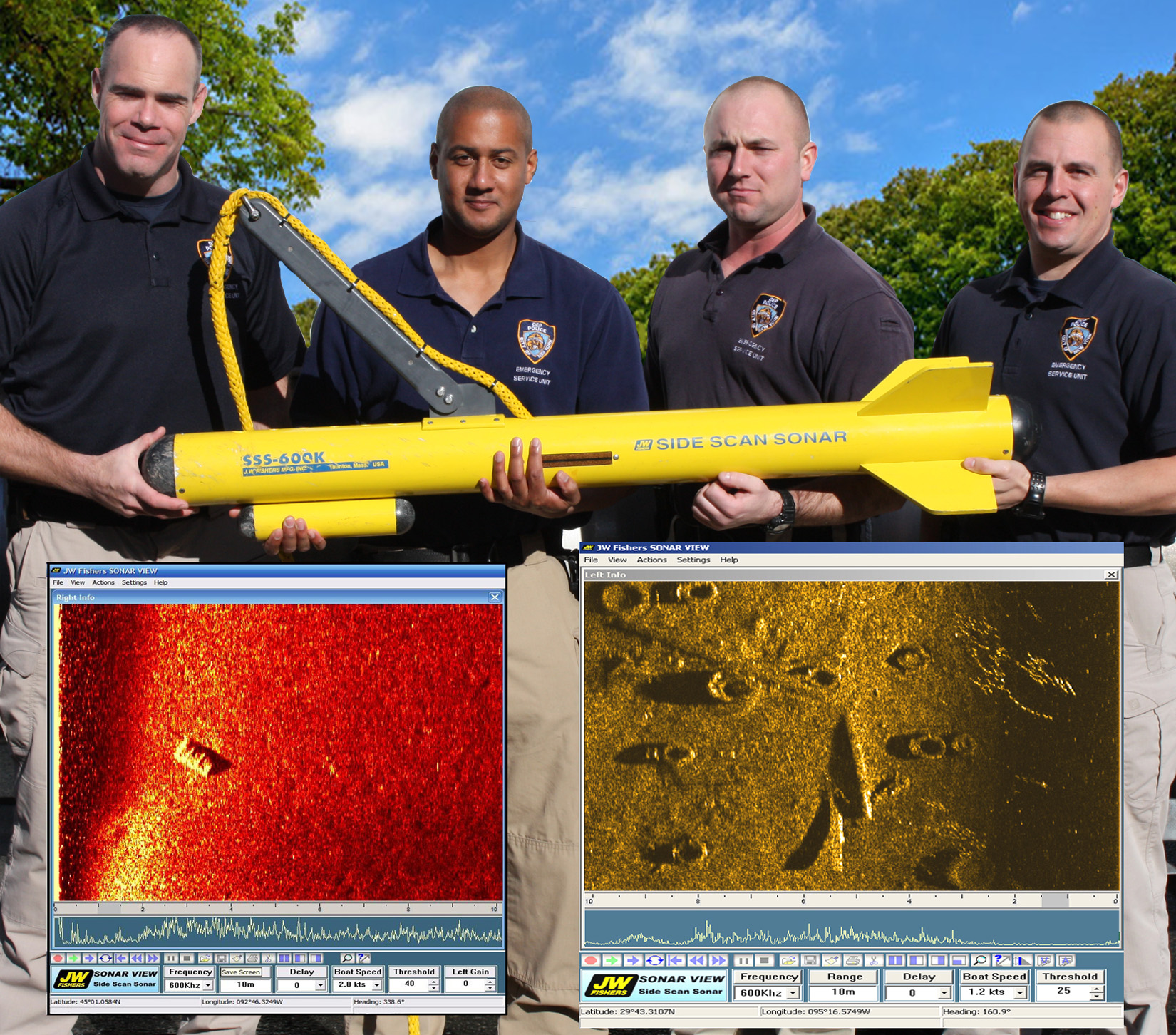 A wide variety of users including public safety dive teams and commercial dive companies are finding side scan sonar to be an essential piece of equipment in their search and survey operations. This sonar is the ideal tool for these projects because it produces detailed images of the underwater environment regardless of water clarity. It scans several hundred feet of ocean, lake, or river bottom with each pass of the boat allowing large areas to be searched quickly. The sonar’s acoustic beam reflects off any objects lying on the bottom and the data is sent topside where vivid color images are displayed and stored on a laptop or tablet computer. Side scan will locate sunken boats, submerged vehicles, and drowning victims as well as inspect bridge supports, seawalls and dams.

New York DEP Police with their JW Fishers side scan sonar, Inset photo – side scan images of steel drum and tires on bottom

One agency utilizing this sonar is the New York Department of Environmental Protection (DEP) Police. Their primary duty is to protect and preserve New York City’s water supply system. Members of this department are New York State police officers and they investigate more than 4,000 complaints each year including illegal transportation, storage, and disposal of hazardous waste. To assist in these investigations, the DEP Police acquired a JW Fishers SSS-600K side scan sonar. The sonar allows them to survey reservoirs to ensure no foreign objects are contaminating the city’s water supply. Towing the side scan over an area produces a detailed map of the underwater terrain so officers know exactly what’s on the bottom. Even in zero visibility the image quality can be almost photographic. The department recently upgraded their sonar system with the latest revisions and sent two officers to Fishers facility in Massachusetts for a free day of factory training.

Another law enforcement agency using the side scan is the Dubai Police in the United Arab Emirates. This desert kingdom between Saudi Arabia and Oman is small by geographic standards, but holds the world’s 7th largest oil reserves and is one of the wealthiest countries in the middle east. Situated on the Persian Gulf is UAE’s most populous city, ultramodern Dubai, which is a hub for international business and travel. The 15,000 strong police force is responsible for the safety and security of 2 million people and is considered to be one of the most progressive in the Arabic countries. It continually strives to use the most up to date law enforcement techniques and technology. The police coordinate all emergency responses as well as search and rescue operations on land and sea. For water SAR operations the department acquired a JW Fishers side scan sonar with splash-proof computer and Sonar Map Coverage software. The splash-proof computer with ultra-bright display allows the sonar to be operated from small, open boats. The mapping software shows the operator the track of the boat as it moves over the search area as well as the width of the area being scanned, to ensure no piece is missed. Fishers also offers an adjustable transducer option for the sonar which allows vertical structures to be scanned by rotating the angle of the transducers. This means a team can survey the face of a dam, seawall, pier, bridge support, or ship’s hull to look for damage or any “unnatural” device like an explosive that may have been attached to a submerged structure. 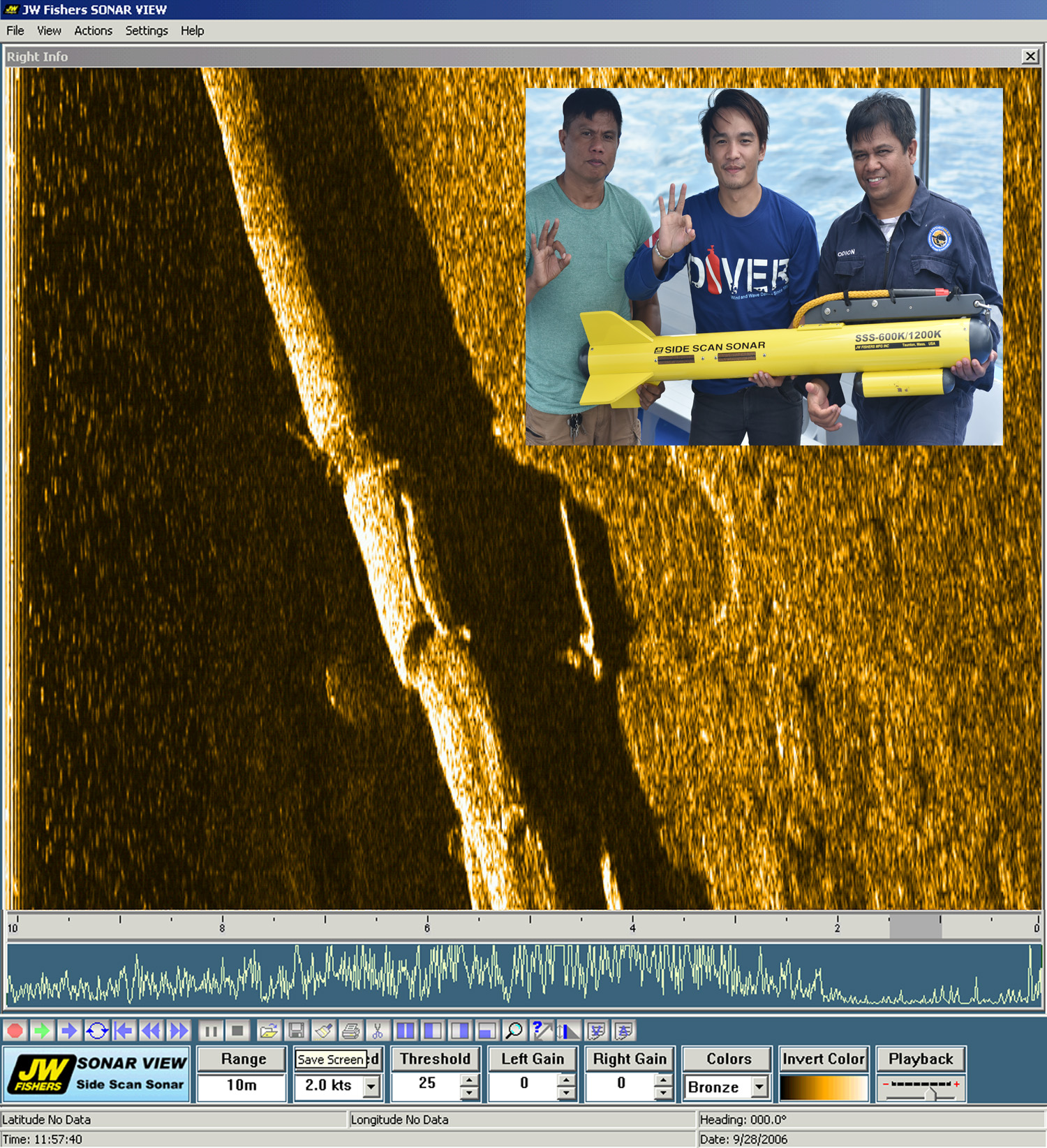 Side scan image of concrete encased pipeline, Inset – Hydromax team with their JW Fishers side scan

Police aren’t the only ones using side scan in their search operations. Many commercial diving companies like Hydromax in the Philippines are also employing these sonars. Hydromax provides its customers with an extensive list of underwater services including ship maintenance and repair, hydrographic surveys, pier inspection and repair, search and salvage, and dredging. The company is certified by Philippine Ports Authority, Lloyds Register, MARINA, DNV, ABS, Class NK and Bureau Veritas. They are equipped with latest state of the art tools and equipment including JW Fishers SSS-600K/1200K side scan sonar with 200 meters of cable and CMS cable management system. The 600K allows an area up to 150 meters wide to be scanned with each pass of the vessel. When very high resolution images of an underwater object are required, the sonar operator simply switches to 1200K with a click of the mouse. Operations manager Richard Odion says he’s very happy with the new sonar and that it will be instrumental for pipeline surveys and salvage projects.