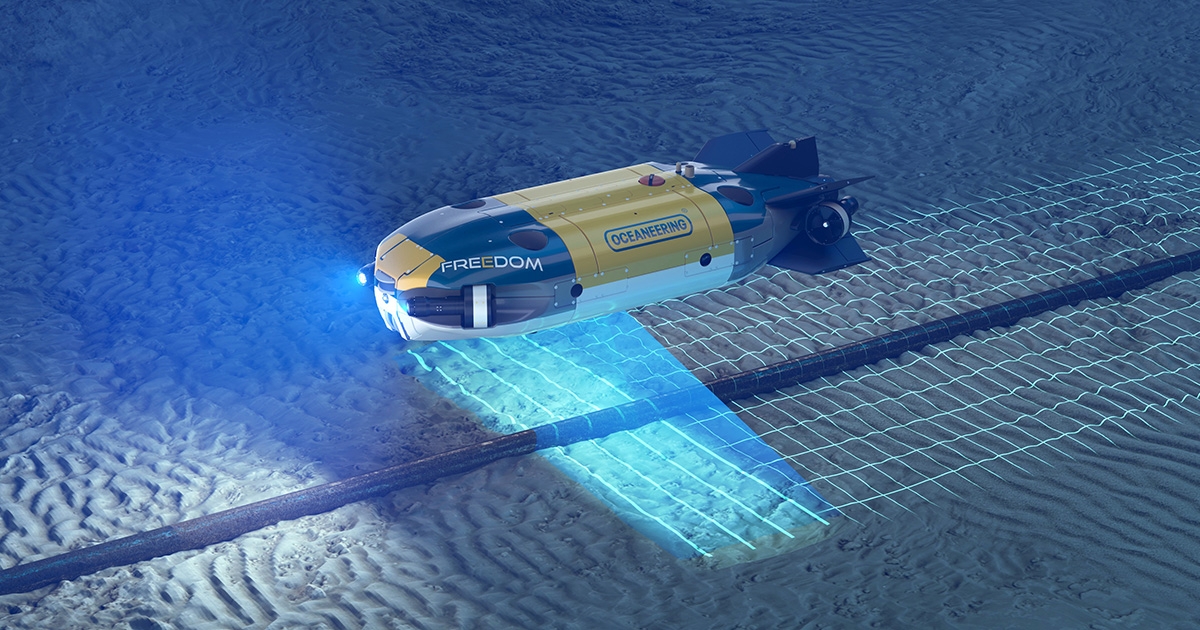 Oceaneering announces that its Freedom™ AUV, following an extensive testing and qualification program, has achieved Technology Readiness Level 6 on a 1-9 scale, as assessed by an expert industry group with representation from TotalEnergies, Chevron, and Equinor.

Freedom, a hybrid AUV/ROV system, is the result of a long-term collaborative relationship between Oceaneering, TotalEnergies, and Chevron dating back to 2014, with Equinor joining the collaboration in 2019. In 2014, the group began efforts to optimize the delivery of a pipeline inspection service from an AUV. The close association between customers TotalEnergies, Chevron, and Equinor, and Oceaneering as developer, has ensured that the specification and requirements of the improved pipeline inspection AUV have been realized within both the hardware design as well as the autonomous behaviors developed and refined during the DevOps testing phase of the Freedom AUV project.

As a result of this long-term investment and effort, Freedom has now demonstrated to the expert group that it can carry out low altitude inspection and survey on pipelines of different diameters. The vehicle can track pipelines at between 3-5m altitude from the seabed providing high resolution survey data and at 8m altitude for reconnaissance and seabed mapping. Freedom’s control software includes specific behaviors to locate and maximize data acquisition value for burial, crossing and freespan events.

To ensure the safety of the vehicle and customer assets, Freedom includes a sophisticated level of obstacle detection, autonomous obstacle avoidance, and general situational awareness. These features allow the vehicle to re-plan its route to avoid detected objects and then to re-engage with the pipeline being tracked once the vehicle has navigated safely past the object.

The initial configuration of Freedom for pipeline Inspection includes outfitting with high specification instruments such as Inertial Navigation System, Laser Scanning System as well as Multibeam Sonar technology to take advantage of Freedom’s unprecedented pipeline tracking ability and proximity to the pipe.

Peter Buchanan, Director, Products and Services, Subsea Robotics, said: “Oceaneering is proud to commercially launch our Freedom AUV for pipeline inspection after a thorough qualification program. We are excited to positively contribute to reducing our customers’ carbon footprints and boost their energy sustainability with each deployment.”

Martin McDonald, Senior Vice President of Subsea Robotics, said: “With Freedom’s unique ability to precisely follow pipelines at high speed, customers can be assured that the quality and completeness of the data gathered will meet their needs whilst lowering their campaign durations. There is a great future for advanced technology of this kind, and we see Freedom playing a key role in the energy transition, including renewables development projects.”