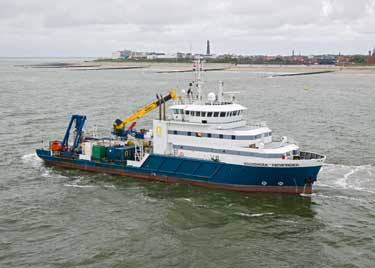 N-Sea managed this project from Eemshaven, with a local team managing all near shore and offshore vessels whilst processing all acquired data. Four survey vessels were utilised, including the Noordhoek Pathfinder.

The investigation element of the project resulted in three positively-identified explosives; two sea mines and one grenade. The sea mines were destroyed on site, with N-Sea coordinating the operation under supervision of the German explosive ordnance disposal service. Requiring a more accurate identification, the grenade disposal was carried out on board a separate vessel, through use of a mobile x-ray machine.

N-Sea’s CEO, Gerard Keser, said: “The corridor started in very shallow water mudflats for a 12 nautical mile zone, north of Borkum in Germany, which is a very challenging environment known for its shallow waters, high currents and continuously moving sandbanks.

“Despite the many challenges and intricacies of the campaign, we successfully identified and destroyed three explosive devices and are proud to have been involved in such an important project. We are delighted to have provided an efficient and safe service, with no incidents, which reflected our ability to always provide ‘safe, sound and swift’ solutions.”

N-Sea is known for its innovative work as an independent offshore subsea contractor, specialising in IMR services for the renewable, oil and gas and telecom/utility industries, as well as for civil contracting communities. N-Sea provides near shore, offshore and survey services to major operators and service companies alike.