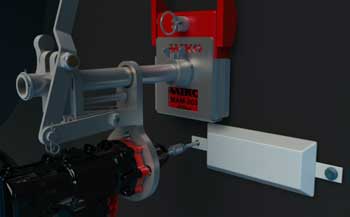 The battery powered Miko Fix drill can be operated by divers at any depth down to 50 meters. It is mounted in a specially designed stand that is clamped to the work piece by high power permanent magnets. When in use the drill is loaded with a unique Miko bolt, the end of which is shaped and hardened to function as the drill bit. This cuts through the metal to be joined and enables its upper end to function as a self-tapping bolt that continues to penetrate so that it is screwed through the pieces that become securely joined. Using the Miko Fix system two steel plates each 10 mm thick can be drilled and joined in approximately 1 minute. When the bolt has been driven home the magnetic clamps are released enabling the process to be repeated at a new location

A new electric underwater drill and fastening system that can penetrate and join two metal plates up to 22mm thick in one action has been developed by Miko Marine AS of Norway.

The new drills and their stands weigh 6 kg in water and have been praised by Norwegian dive company Kambo Marina who tested the system during its development. “We used it to fix an anode to a steel plate and were very impressed with its efficiency and ease of use,” said general manager Ketil Svelland. “It is bound to have an impact upon the professional diving industry as it will increase the options available to us when we are doing repair work underwater. We are very proud to have been the first divers to use a new tool that in a few years is likely to be seen everywhere.”

The new Miko Fix system can be used for a huge variety of repair and construction tasks underwater although it was developed specifically for use with the Miko FlexiShape patch. These are manufactured by Miko to provide a temporary water-tight seal that can be used to close-off damage to a ship’s hull and make it seaworthy for sailing to a dry dock for permanent repair. The patch is positioned over the hole by divers and held tightly against the hull by aluminum strips. In the past these have been fixed in place by a hand-held Miko gun which can fire rivets through up to 25 mm steel plate to create a water tight seal. Unfortunately the small explosive charges used to drive-in the rivets are challenging to transport because of safety regulations. This limits their use internationally so Miko designers invented the new drill-based system so it could do the same job but without the transport restrictions faced by the gun.