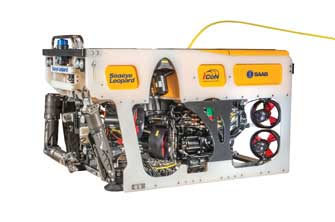 The pioneering Leopard work vehicle, with its eleven thrusters and iCON intelligent control system will provide TravOcean with a stable work platform that is unrivalled amongst ROVs – particularly in strong currents.

Greater flight stability under variable loads is delivered by the iCON system - including pitch and roll stabilisation – to give stable flight even with large tools and sensors deployed.

ICON independently manages each device on the vehicle, including auto redundancy to keep the ROV working even with multiple equipment damage.

Effectively, the Leopard thinks for itself, leaving the operator free to concentrate on the task at hand.

This independent control comes from relocating the brains of the system into sensors and actuators around the vehicle - having refined the main electronics into an intelligent power distribution and data hub. The user also gets greater information and maintenance is far simpler and quicker.

Free from centralised electronics, the Leopard’s distributed intelligence allows for systems to be changed or added without the need to partially dismantle the vehicle. It also offers building-block simplicity for system reconfiguration, along with remote internet access for upgrades and support.

The chassis has been designed with rapid reconfiguration and easy maintenance in mind. A large open payload bay within the vehicle allows for ample tooling and survey sensors to be installed rapidly on sliding trays.

Users of the Leopard work ROV report being impressed by its work capabilities and compare it favourably to hydraulic work vehicles. The inspiration behind the concept, says Saab Seaeye, was to produce a vehicle able to undertake the widest possible range of work tasks, in the most diverse environments, at the lowest cost of ownership.