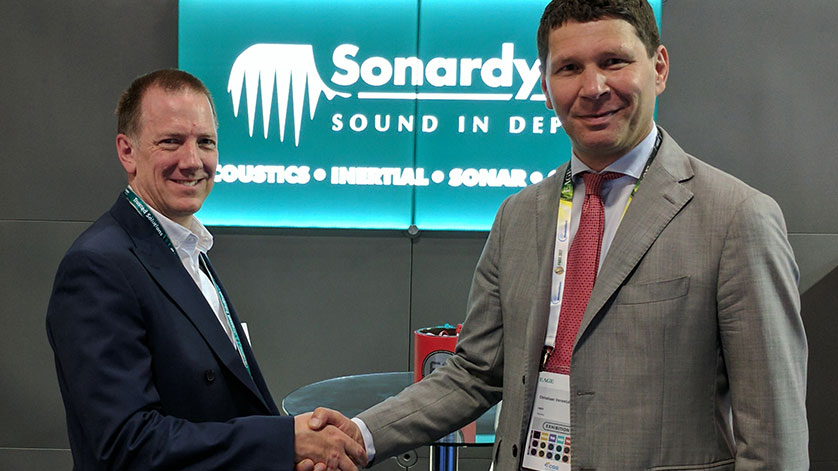 The Ranger 2 Gyro-iUSBL system combines acoustic positioning and inertial navigation technologies and is the second system now owned by EMGS. It will be fitted to one of their towed electromagnetic sources which operate in water depths down to 4,000 meters, in conjunction with electromagnetic receivers, to detect the presence of hydrocarbons through more than three kilometers of rock. The purchase was announced on the opening day of the EAGE annual conference in Paris which both companies are attending.

EMGS are specialists in Controlled-Source Electromagnetic Surveying (CSEM), a method that involves towing a long horizontal dipole antenna behind a towfish flying at between 30-50 meters above the seafloor and transmitting a specific pre-defined EM waveform. EM receivers deployed on the seabed measure any energy that has been reflected by fluids, such as hydrocarbons, present in the reservoir as well as from the surrounding geological strata. This information can be used to produce reservoir maps for hydrocarbon exploration.

Precise subsea positioning of the source towfish, antenna and each seafloor receiver is critical to the success of CSEM. It leads to more accurate mapping of deeper reservoirs, and helps to reduce the risk of drilling dry wells.

Sonardyne’s Inverted Ultra-Short BaseLine (iUSBL) positioning technique addresses these complex operational requirements. It uses an acoustic transceiver called Gyro-iUSBL fitted on the towed source pointing backwards to continuously measure the positions of small acoustic transponders attached along the length of the dipole antenna. From this information, the precise shape of the antenna can be determined as it moves through the water.

During a survey, the positions of the towed source and seafloor receivers are determined using a conventional Ranger 2 USBL installed on EMGS’s survey vessel, Atlantic Guardian. This system is also used to process positioning data from the Gyro-iUSBL to calculate a tightly integrated navigation solution.

Trevor Barnes, Sales Manager for Exploration at Sonardyne said, “We delivered the first Ranger 2 Gyro-iUSBL system to EMGS in 2013, and at the time it was one of the most technically complex, but highly successful system integrations we had ever undertaken. He added, “Over the last four years it has been proven to meet all of EMGS’ requirements and we’re delighted with their decision today to invest in a second system.”