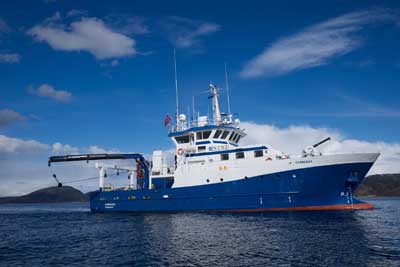 May 8, 1945: German forces in Norway have surrendered, and after five long years of occupation, the country is finally free.

Suddenly, 30,000 Allied troops had to disarm 350,000 German soldiers, and deal with huge stockpiles of German bombs, guns and ammunition along Norway's 2500-km-long coast. It was a nightmare assignment, especially the bombs. So the Norwegians did what they often did in times of crisis: they turned to the sea.

"The Norwegian resistance have very few vetted personnel to secure all the German soldiers and all this ordinance, and some of the stockpiles are probably booby-trapped," said John Kjeken, a marine biologist who is studying the abandoned bombs for his master's thesis. "The great fear is that (the bombs and ammunition) will be distributed among the populace—accidents can happen, plus there was an active communist contingent. So they went to lakes inland and to the fjord, and they dumped it."

Seventy years later, Kjeken is aboard the RV Gunnerus with his supervisor, Geir Johnsen, a professor in marine biology at NTNU, to visit a large WWII bomb dump in more than 600 meters of water at the mouth of Trondheim fjord.

While Kjeken and Johnsen will check the condition of the bombs, what really interests them is what has grown on the bombs since they were dumped in the years after WWII. Here, in Agdenes, the deepest part of Trondheim fjord, currents are strong and the bottom is nearly devoid of life— except on the rusting hulks of torpedoes, grenades and bombs that have been disposed of on the bottom of the sea.

These once deadly weapons have hard surfaces that provide perfect artificial reefs. Kjeken's mission is to catalogue the life forms that are growing on the bombs. Given the depth of the water, he will have help, in the form of an HD camera mounted on a 2-ton remotely operated vehicle — an ROV. 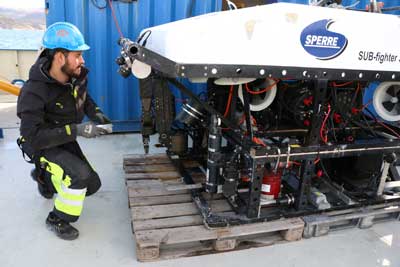 Because researchers know when the bombs were abandoned, the munitions dump offers a kind of long-term natural experiment. They can see how quickly cold-water coral reefs grow in deep water, and what kind of animal life they can support at such great depths. Perhaps of equal importance, however, is that the organisms on these artificial reefs also serve as a kind of early warning system.

"If the bombs start to leak chemicals or explosives, the organisms will die," Johnsen said. "And then maybe it's time to decide what should be done with them."

A widespread problem in the North Atlantic
It's almost impossible to say how much ordinance has been dumped in the world's oceans, but the OSPAR Commission, which works with the 15 countries (including Norway) that signed the Convention for the Protection of the Marine Environment of the North-East Atlantic, reported in 2010 that there were at least 151 known chemical weapons and munitions dumps in the North Atlantic.

The highest known concentration of munitions is in Beaufort's Dyke, a deep trench between Scotland and Northern Ireland, where an estimated 1 million tons of munitions have been dumped since the 1920s.

After the Second World War, Norwegian officials allowed the military to scuttle at least three dozen ships filled with captured munitions in the Skagerrak, the channel between the Scandinavian Peninsula and Denmark. All told, 168,000 tons of ammunition, including artillery shells and aerial bombs containing chemical weapons, were dumped at depths of between 600-700 meters, according the Norwegian Defense Research Establishment.

Dumping bombs far from people and in the deepest part of the sea may have seemed like a good idea at the time, because few people had the means or any reason to go there. These days, the ocean bottom can be valuable real estate, what with the need to build submarine pipelines, lay underwater power cables and construct offshore wind farms, among many other marine developments. Now these munitions dumps potentially pose problems for different underwater activities.

Fishermen can also be at risk. In 2013, for example, the OSPAR Commission reported 657 encounters with abandoned munitions in Brest Harbor, on the north-western coast of France. In 2005, three Dutch fishermen were reportedly killed by a WWII bomb or shell that they brought aboard in their fishing nets. Nevertheless, a comprehensive survey by researchers from Imperial College London in 2005 concluded that while some chemicals, such as mustard gas, had the potential to continue to pose problems, in most cases, it made sense not to dredge up old munitions.

Fortunately, the munitions in Trondheim fjord don't appear to be at risk of blowing anyone up yet. A previous visit by NTNU and the Geological Survey of Norway (NGU) with the Gunnerus and an ROV in 2014 suggested that the bombs and other munitions are somewhat rusted but are still more or less intact.

Green then blue, and marine snow
On a clear April morning earlier this year, the Gunnerus set out for its two-hour sail to Agdenes and the mouth of the fjord. The winds were light—perfect for dropping a 2-tonne ROV into 600 meters of water. As it turned out, the cable for the ROV is only about 600 meters long, but the tides were with the researchers, so they believed it would be possible to see what they had come to see.

Even though it weighs 2 tons, it took a good half-hour to lower the ROV, called the SUB-fighter 30k, down to the depths where the bomb dump was located. But even before it reached its goal, the ROV's trip into the deep had its own surprises, at least for the uninitiated. For one thing, as the ROV got deeper, the color of the sea water shifted. First it was light green, then darker green, and then, at about the 60-metre mark, it shifted to a startling cornflower blue when one of the ROV pilots, Martin Ludvigsen, from NTNU's Applied Underwater Robotics Lab, flipped on the lights on the vehicle.

The blue water was mostly empty of fish, but it was nevertheless full of life. Plankton and small jellyfish shot past the camera's lens, and the image on the big wall-mounted screen gave viewers the uncanny feeling of driving through a dense snowstorm. Zooplankton and "marine snow," Kjeken told a surprised visitor, although he was clearly accustomed to the view.

Squat lobsters and cauliflower coral
At just under 600 meters, the ROV pilot slowed the vehicle's descent, and started cruising the silty grey bottom. The silt was nearly featureless, except for a stippling of holes of different sizes, created by different burrowing animals hiding themselves in the mud.

ROV pilots Frode Volden and Stein Nornes struggled a bit to coordinate the speed of the ROV, at the end of its 600-metre-long cable, with the speed of the boat. A walkie-talkie crackled with chatter as another pilot, Pedro Roberto De La Torre Olazabal, talked to Captain Arve Knudsen on the bridge. It wasn't until the Gunnerus slowed to less than a knot that the pilots got the ROV in sync with the ship so it could cruise along the bottom, casting about for bomb remains to film.

It wasn't long until the first find drifted into view: a rectangular chocolate brown box, festooned with cauliflower coral and a number of small, squat lobsters, called "trollhummer" or literally, "troll lobster" in Norwegian. Pink anemones clamped to the edge of the box waved their multi-tentacled bodies in the water, and here and there, a sea pen, a long white quill, stuck straight out of the muddy bottom. Kjeken, seated at a separate computer in the control room, began recording the HD camera's output.

"I'll be sitting at home with a clicker in my hand later to get a count of all the objects," he said. "Then I'll note any interesting things that I see, and I'll spend a lot of time identifying species and trying to find out what sorts of functional groups and systematic groups we have here."

A remote bus stop
For the next two hours, Kjeken recorded the HD camera's output while the ROV cruised a long transect. Although classified as a munitions dump, the bombs and other munitions weren't piled in a huge mound on the ocean's bottom, like you might expect from a land-based dump—instead, they were scattered in an area of approximately two million square meters of sea floor, spread by the ocean's currents as they drifted down from the surface after they were chucked into the sea.

Sometimes the camera cruised over clearly identifiable torpedoes or aerial bombs, always bedecked by a few squat lobsters, anemones, corals and molluscs, while other times the bomb remains were more like big blobs of brownish metal, making them difficult to categorize. The real surprise, however, was that virtually every hard surface had been colonized by some living thing.

Johnsen and the NGU's Terje Thorsnes had been to the munitions dump in 2014, so they knew a little of what the researchers would find during the current transect. But no one knew quite what to think when a giant tire suddenly floated into view, attached to a vehicle.

Could it be a Nazi amphibious vehicle that was dumped with the bombs? The researchers crowded around the viewing screens in the ROV control room as the pilot flew slowly around the vehicle. The long-gone windows were draped with antler-like fronds of something called bubblegum coral, a shocking neon pink color even in the light of the ROV. There were no visible markings on the bus, but eventually a glint of shiny metal trim came clear as the ROV made its circuit. These bits of metal were clearly aluminum, which dated the bus to a time after the war.

"We'll see if we can't find somebody who knows how that bus got there," Kjeken said. "There's probably a group that is interested in the history of buses in this area, and someone may know the story of who dumped the bus and when."

For Johnsen, the bus represented something else —a call to action. "The sea is not just a dumping site for bombs; trash and nearly everything else ends up in the sea," he said. "We don't think about where all this stuff is going. But we should."