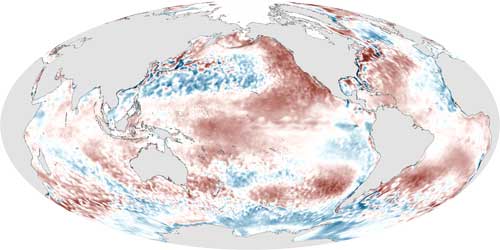 The long-forecasted El Niño event of 2014/15 did not meet expectations. On March 5, 2015, the National Weather Service finally declared a "weak" event arriving several months later than expected, formally dashing predictions that we would see a major event on par with the monster El Niño of 1997/98 that would bring much-needed rain to California and other western states. Now, a team of researchers believes that they know why this year's event--and others like it--didn't live up to the hype.

A new study published online April 13, 2015, in the journal Nature Geoscience finds that prolonged wind bursts originating in the western Pacific can have a strong effect on whether an El Niño event will occur and how severe it is likely to be. In addition, the paper identifies three distinct varieties or "flavors" of El Niño, and explains how these westerly wind bursts (WWBs) can determine which of these flavors will take shape. The findings should help refine future predictions of these global-scale climate events.

"These westerly wind bursts are intraseasonal--they're not weather, they're not climate, but somewhere in between," said Raghu Murtugudde, a professor of atmospheric and oceanic science at the University of Maryland who is a coauthor on the study. "Our study shows that the wind bursts are definitely having an effect. We better learn to predict them if we are going to have skillful El Niño predictions."

The researchers analyzed 50 years of tropical Pacific sea surface temperature and westerly wind burst data. They found differences, especially when comparing the data from this year's weak El Niño event with the record-breaking event of 1997/98.

"The most notable difference was the existence of strong westerly winds extending from the western to central equatorial Pacific in May 1997, which were not seen in 2014," said Murtugudde, who also has an appointment in the university's Earth System Science Interdisciplinary Center (ESSIC). "The development of strong westerly winds in the central equatorial Pacific in association with the warming to its east appears to be an essential element of large El Niño events."

After adding westerly wind bursts to their intermediate ocean-atmosphere coupled model, the researchers consistently found three "flavors" of El Niño (rather than one, which was the model's output without the winds). The three warm patterns included extremely strong events with the largest warming near the South American coast, a cluster of weak warm events centered near the dateline, or moderate warming in the central-eastern equatorial Pacific. For strong El Niño events, the westerly wind bursts grew strong and extended east of the dateline.

According to the research team, the wind bursts affect ocean dynamics by exciting Kelvin waves that produce surface warming in the eastern equatorial Pacific and by generating strong equatorial surface currents that extend the eastern edge of the warm pool.

"We hope this study helps other climate modeling researchers realize the importance of westerly wind bursts on El Niño severity and diversity, and the importance of extending our weather forecasting capabilities from two to four weeks to capture WWB variability. Fortunately, the latter is now a focus at the National Atmospheric and Oceanic Administration, which develops our weather forecasts," said Murtugudde.

The study included researchers from the Second Institute of Oceanography in Hangzhou, China; Nanjing University in Nanjing, China; and Columbia University in New York.

Image showing the average sea surface temperature for February 2015 as measured by NOAA satellites. The large area of red (warmer than average) can be seen extending through the equatorial Pacific. Analysis by the NOAA Climate Prediction Center confirmed that after five consecutive overlapping three-month periods of average sea surface temperatures in the middle equatorial Pacific being 0.5 degrees Celsius warmer than their historical average, El Niño had officially arrived. (Credit: NOAA)