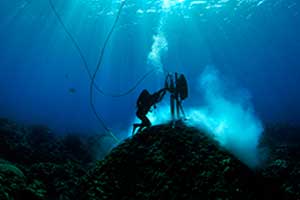 Scientists have uncovered crucial historical evidence to better understand how marine heat waves unfold among the unique coral reef ecosystems of Western Australia, information that is necessary for more accurately predicting the ecological consequences of continued warming in this region.

AIMS expert diver coring one of the corals used in this study at Clerke Reef, WA. Image: E. Matson/AIMS

AIMS researchers, together with a team of scientists from The University of Western Australia, Curtin University, CSIRO and the University of California-Santa Barbara have analysed coral cores from three reefs in the eastern Indian Ocean. Each of the cores contains seasonal growth bands, similar to tree rings, and provides information about past climate conditions. These natural historical archives enabled the team of scientists to successfully reconstruct ocean conditions of the West Australian shelf for 215 years, from 1795 to 2010.

What they found was clear evidence that strong warming over the past 215 years has made it easier for otherwise natural climate events, such as La Niňa, to support the occurrence of marine heat waves and mass coral bleaching. Therefore, despite not being exposed to many of the local pressures degrading other reefs around the world, the reefs of Western Australia have an uncertain future. For example, in 2011, Western Australia’s marine environment – home to two World Heritage areas- faced a record-breaking marine heatwave resulting in mass coral bleaching and fish kills.