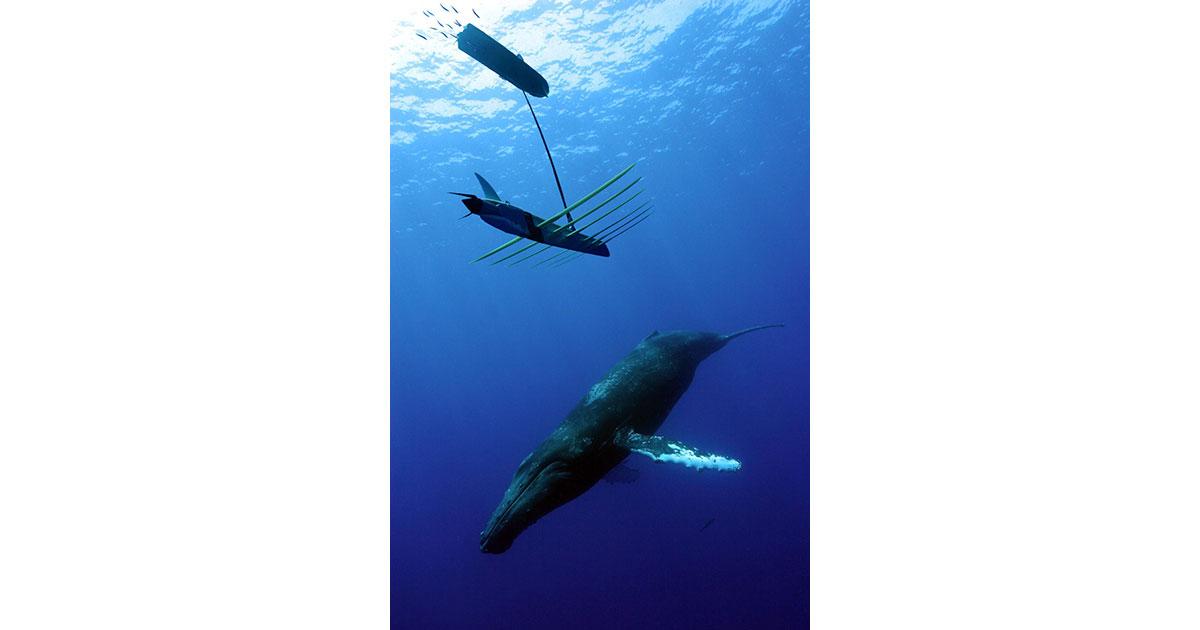 Jupiter Research Foundation and Whale Trust are announcing that the publication of the results of the first leg of their autonomous Wave Glider HUMPACS (Humpback Pacific Survey) acoustic survey in Journal of the Acoustic Society of America – Express Letters.

During a 100-day nearly 7,000 km (3,800 nm) round trip survey on a line between Hawaii and Mexico within the 2018 winter breeding season, humpback whale calls were heard in mid-ocean basin, halfway between the known near-shore assemblies.

“They’re not ‘supposed’ to be there,” says Dr. Jim Darling, Whale Trust biologist and project partner. Humpbacks are known to assemble in specific near-shore, relatively shallow, breeding grounds in Mexico and Hawaii. “But then no one has looked in these more remote, offshore areas either.”

Mission control was from Puako, Hawaii where Beth Goodwin, Jupiter Research Foundation VP and HUMPACS Project Manager, and her team were in daily communication with the Wave Glider: monitoring status, downloading surface and underwater photographs, downloading short samples of recordings via satellite, and making course alterations if needed.

The humpback calls were recorded up to 2,184 km (1179 nm) offshore spanning 30 days between January 20, when the Wave Glider left Hawaii, to February 23, 2018. On many days, multiple humpback call detections were recorded (up to 377 calls over 23 hours of a day). Actual numbers of whales cannot be determined, as one whale can make many calls.

“This was risky, we had no idea if humpbacks were even out there,” says Goodwin. “And then, even if they were, there were needle-in-haystack odds of intersecting them considering the size of the Wave Glider and the size of the ocean.”

Possible explanations, suggests Darling, include an undocumented migration route to Hawaii, a separate (from Hawaii and Mexico) offshore assembly of humpback whales, or travel between Mexico and Hawaii assemblies within the same season. At the very least, these results indicate an extension of winter distribution and habitat of humpbacks. It could also be that these offshore whales have not been included in current population estimates.

This assessment is further complicated by longstanding research showing shared song between the breeding assemblies and an interchange of photo-identified individual whales between these two winter breeding grounds.

Our findings question the independence of Mexico and Hawaii humpback whale populations and illustrate the huge potential for the use of autonomous vehicles in the study of whales across remote locations of the ocean.

“We feel certain our results will encourage more research, affect how humpback and other whales are monitored, and help with management,” says Goodwin.

The paper is online.