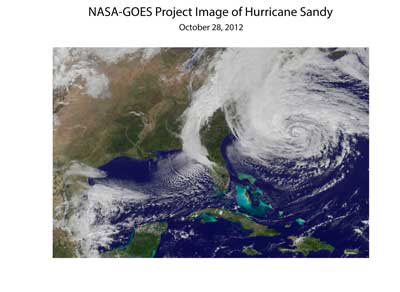 Hurricane Sandy became the second costliest hurricane to hit the United States when it blew ashore in October 2012, killing 159 people and inflicting $71 billion in damage. Informally known as a "superstorm" after it made landfall, Sandy was so destructive largely because of its unusual size and track. After moving north from the tropical waters where it spawned, Sandy turned out to sea before hooking back west, growing in size and crashing head-on into the East Coast, gaining strength when it merged with an eastbound mid-latitude storm.

A new study led by the University of Maryland's Earth System Science Interdisciplinary Center (ESSIC) suggests that a warmer Atlantic Ocean could substantially boost the destructive power of a future superstorm like Sandy. The researchers used a numerical model to simulate the weather patterns that created Sandy, with one key difference: a much warmer sea surface temperature, as would be expected in a world with twice as much carbon dioxide in the atmosphere. This simulated warmer ocean generated storms that were 50 to 160 percent more destructive than Sandy. The results appear online January 19, 2016 in the journal Geophysical Research Letters.

This satellite image shows Hurricane Sandy on October 28, 2012, shortly before it made landfall and was renamed a superstorm. Credit: NASA-GOES

"This kind of experiment is not necessarily a realistic simulation, but it is along a similar path that the future climate might expect to evolve," said William Lau, a research scientist at ESSIC and senior scientist emeritus at NASA's Goddard Space Flight Center. Lau added that sea surface temperatures could reach such elevated levels within the next 50 to 100 years.

In the model scenarios, the pool of warm water (greater than 82 degrees Fahrenheit) in the tropical Atlantic grew to twice its actual size. The larger warm pool gave the simulated hurricanes more time to grow before they encountered colder water or land.

In the five simulations conducted by Lau and his colleagues at NASA Goddard, two hurricanes followed the same track as Sandy, hooking westward and merging with the mid-latitude storm as they hit the coast. Because of their longer exposure to the large warm pool, their winds had 50 to 80 percent more destructive power, and they brought 30 to 50 percent more heavy rain. "We expected the storm would definitely get stronger because of much warmer sea surface temperature," Lau said.

"These events are somewhat rare in occurrence, but they do exist in nature," Lau said. "While they're turning about each other, they interact. One just took the energy from the other." As a result, the three Fujiwhara-enhanced hurricanes' destructive power peaked at 100 to 160 percent higher than Sandy, and brought as much as 180 percent more rain. And while they made landfall farther north, Lau said, their impacts could be farther-reaching and more devastating than Sandy.

"Because the size of the storm is so large, it could affect the entire Atlantic coast, not just where it makes landfall," he predicted. "The rainfall itself is probably way out in the ocean, but the storm surge would be catastrophic."

Lau said the usual approach to simulating a storm in a warmer climate would be to impose a prescribed sea surface temperature, and then adjust the atmospheric conditions such as air temperature, moisture and winds. The model would then be run many times, making adjustments each time in hopes of creating a Sandy-like storm. But this approach is tedious and does not guarantee meaningful results, Lau explained.

"When confronted with the question whether or not global warming contributed to Sandy, many scientists would just throw their hands up and say, 'We cannot address the question of how hurricanes will behave in a future climate because the myriad factors affecting storm behaviors are too complex and impossible to simulate'," Lau said. "This is the first time it was done by using known atmospheric initial conditions that gave rise to Sandy, and simply changing one important variable--in this case, the ocean temperature."

By using this approach, Lau and colleagues created an informative--if only plausible--scenario that could help to understand how storms might behave in a future warmer climate.

Lau noted that Sandy was most likely a "perfect storm" brought about by a series of improbable coincidences. As such, it's hard to make any definite conclusions about whether and how global warming contributed to Sandy and other recent destructive storms, he said.

"However, studies like ours can help provide informative answers to the more tractable question of how a perfect storm like Sandy would behave under warmer ocean temperatures," Lau said. "It's a very important line of investigation for better understanding the future of our planet."

This work was supported by NASA and the U.S. Department of Energy (Award No. 4331620). The content of this article does not necessarily reflect the views of these organizations.