Using Innovative Acoustic Technology to Prepare for the America’s Cup 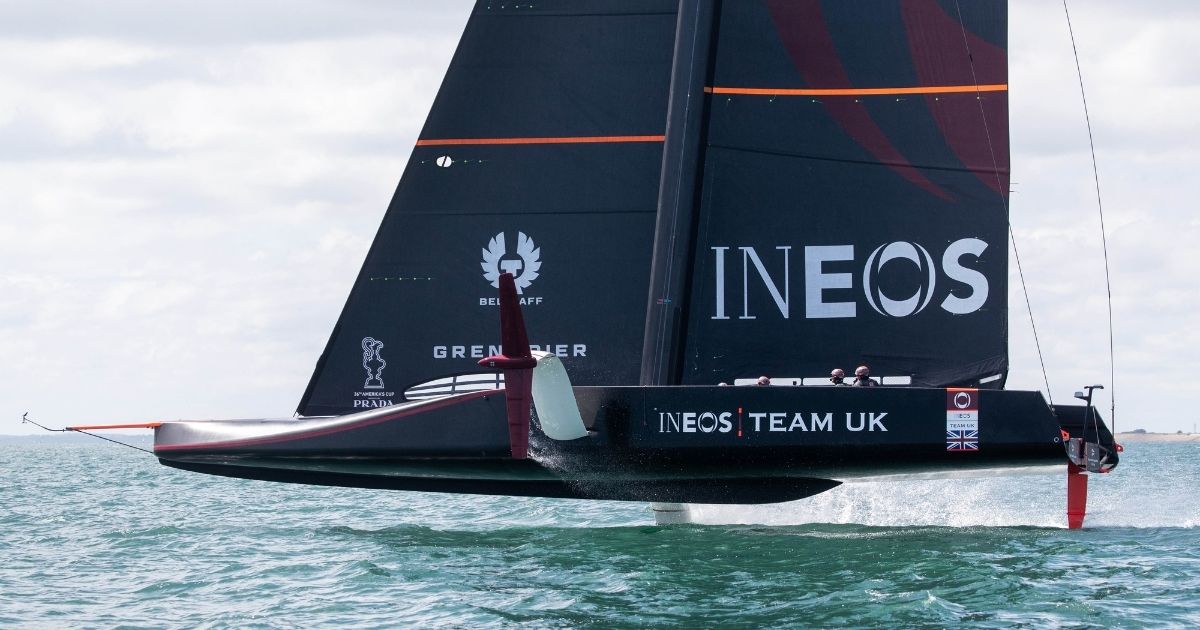 INEOS TEAM UK needed accurate measurements of speed through water while training for the America’s Cup in waters with complex current flows. How did Nortek’s acoustic Doppler instrumentation meet their stringent demands for high performance?

INEOS TEAM UK was formed to challenge for the 36th America’s Cup, to be held in New Zealand in 2021. They will compete in their new AC75 yacht named Britannia, a foiling monohull that flies over water on T-foils at speeds up to or exceeding 50 knots.

The team represent the Royal Yacht Squadron, one of the most prestigious yacht clubs in the world, and are based out of Portsmouth on the south coast of Britain, using the Solent as their training waters.

“The Solent’s reputation as a venue for sailboat racing is well-known. Its strong tides and complex geography and wind patterns make it an interesting and fun place to race,” says INEOS TEAM UK’s Technology Coordinator, Mark Chisnell.

“Unfortunately, these conditions can make it a tricky venue for testing America’s Cup yachts, as satnav cannot be relied on for accurate performance information because it only measures motion relative to the seabed. The complex and ever-changing tidal current flows of the Solent add an unknown vector into the data that makes it difficult to accurately measure the yacht’s true speed.”

The tide can flow at speeds in excess of four knots in some areas of the Solent, and if not measured correctly could potentially introduce a significant error in the test data.

“We try to sail in areas with weaker tidal flow to mitigate the error from satnav speed measurements,” adds Chisnell. “And we have tidal charts to help us work out the current rate in the test areas, but measuring the boat’s speed through water will give us much less potential error in the data.”

The team needed to measure velocity through water very accurately. The team’s review of the market led them to oceanographic instrumentation specialist Nortek, who have had great success with their technologically advanced and accurate Doppler Velocity Logs (DVLs) for subsea navigation. These sensors use an acoustic Doppler measurement to estimate velocity relative to the water column.

“We knew that the Nortek DVL had been used successfully in ocean racing, involving high-performance monohulls that could reach 30 knots. So while the DVL was intended for the slow speed and high accuracy demands of subsea navigation, there was evidence that the sensor might cope with the speeds of the AC75,” says Chisnell. 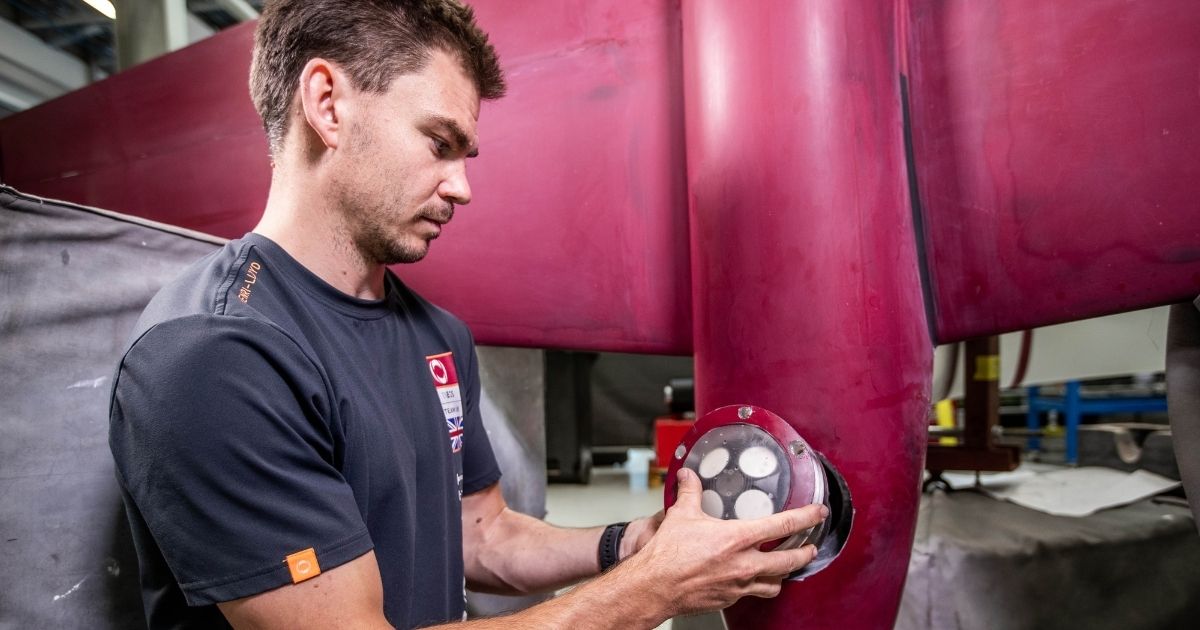 The solution was to mount a tailor-made Doppler speed log from Nortek inside the bulbs of each of Britannia’s T-shaped foils, with a flooded chamber sealing the space and forming a smooth interface with the external face of the bulb. This provides very accurate speed through water measurements without affecting performance.

“We recessed the speed log into the bulb, which was flooded. It was then covered with a piece of acoustically neutral plastic, a polycarbonate plate. This achieved the two goals of an unbroken (or measurable) acoustic path from the transducer into the water column, while maintaining a very smooth and efficient underside to the bulb,” explains Chisnell.

“We’re very happy to have had Nortek as a partner in this project. Nortek’s Doppler speed log is an impressive technical achievement. Having accurate knowledge of the inflow vector to the lifting foils has given the team new insights into the boat’s dynamic behavior and performance,” says Nick Holroyd, Chief Designer, INEOS TEAM UK. 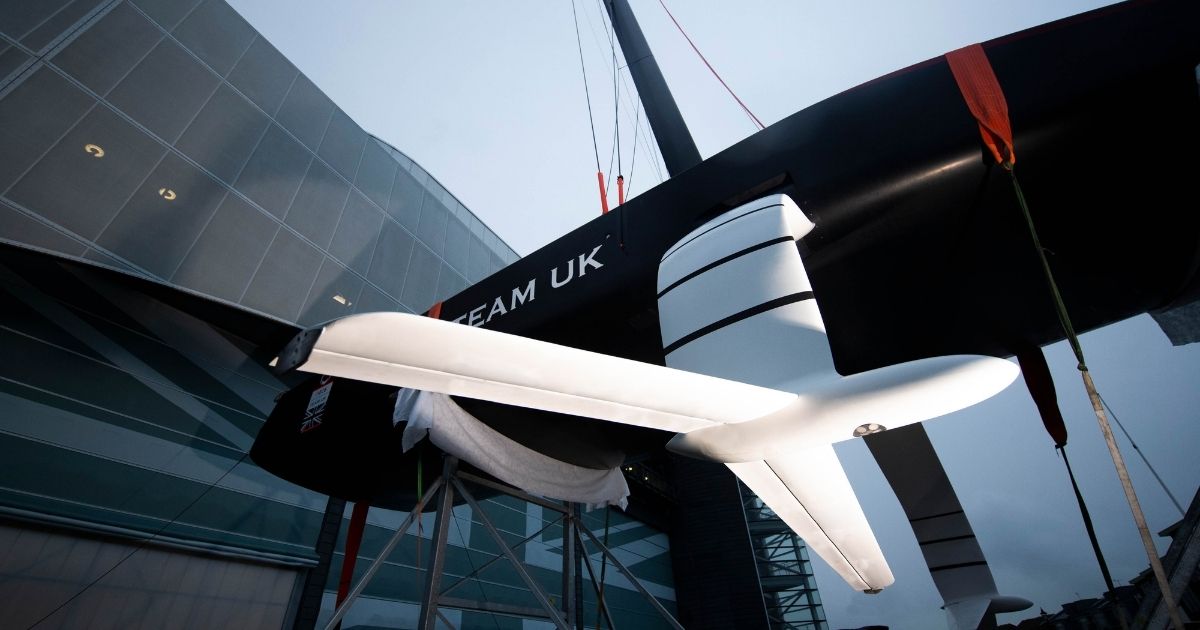 The AC75 is a new concept introduced for the 2021 America’s Cup: a foiling monohull that flies over the surface of the sea on one or other of two T-foils.

Building on a tradition of marine problem-solving

Nortek has a long tradition of solving technically challenging problems in the marine environment.

“INEOS TEAM UK approached Nortek knowing that we had been down a similar path before. However, the challenge presented was to measure speed through water accurately from a foiling sailing machine – something that has not been done before now,” says Torstein Pedersen, Development Engineer at Nortek.

The success of this solution was very much cooperative: Nortek provided the modified electronics and operational advice, while the INEOS TEAM UK technical team ensured an optimized installation in the foil.

“We are familiar with an iterative process for these custom solutions, but in this instance, I think we were all surprised how well it worked right out of the gate. When we now watch Britannia tearing across the ocean surface, balanced merely on its foils, it is hard to believe that there is a little speed log just below the surface pinging away and answering questions,” Pedersen adds.