Unique Partnership to Restore Reefs in the Florida Keys 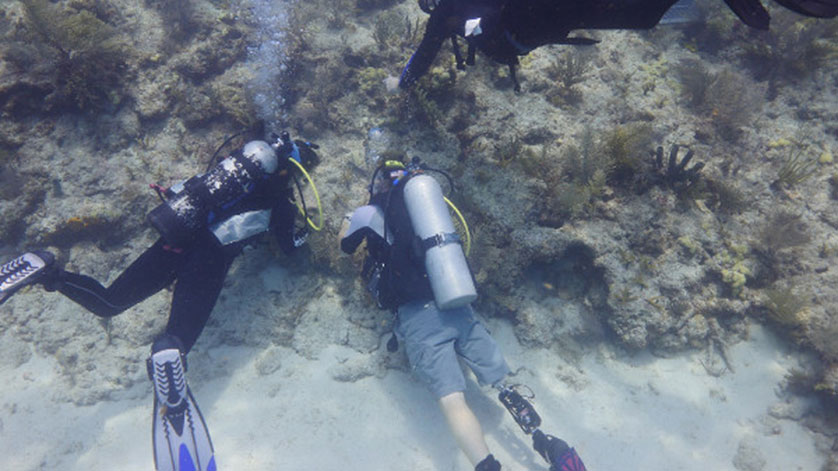 This event, being conducted under Florida Keys National Marine Sanctuary (FKNMS) permit #2015-163-A1, marks the sixth year of a unique coral restoration partnership that enables citizen science volunteers to participate in cutting-edge marine habitat restoration. It will also be the first time the groups have come together since the opening of the Elizabeth Moore International Center for Coral Reef Research & Restoration (IC2R3) at Mote. The IC2R3 is advancing coral reef research using new seawater systems, raceways and experimental tanks for studying the effects of rising ocean temperatures and ocean acidification on multiple species. The Lab is also equipped for next generation genomic sequencing and analyses that will help uncover the best genetic strains of corals for reef restoration and more.

Mote also recently received a $500,000 appropriation from the Florida Legislature to work with the Florida Fish and Wildlife Conservation Commission and Department of Environmental Protection to restore approximately 25,000 corals in the Florida Keys from Bahia Honda to Key West, starting in late summer 2017 and continuing for about a year.

“We’re working to restore the only barrier reef in the continental U.S. and, as an organization dedicated to helping the public understand ocean ecosystems and to supporting the next generation of scientists, we’re always looking for new opportunities to involve citizen scientists — like the SCUBAnauts and the Combat Wounded Veterans — in our research programs,” said Mote President & CEO, Dr. Michael P. Crosby. “Not only do these combat veterans and youth volunteers provide important support to Mote that helps accelerate the coral reef restoration work we’ve been doing since 2006, they also inspire and challenge us all to do more in our shared mission of science-based conservation.”

Ten years ago, Mote established an underwater coral nursery where scientists grow colonies of the threatened staghorn coral (Acropora cervicornis) for replanting on decimated or damaged sections of reef within the Florida Keys National Marine Sanctuary. When the colonies reach a suitable size, small fragments nearly 2 inches long (about 5 cm) are snipped off and used to create a new colony — similar to the way new plants are grown from cuttings of existing plants. Then these cuttings are mounted on the reef so they can grow and develop into new colonies.

Mote has more than 10,000 colonies of staghorn coral in our underwater nursery —which includes more than 85 genotypes, allowing researchers to determine which corals have the heartiest genetic makeup and the best chances of survival.

To date, Mote has planted more than 40,000 reef-building coral fragments to help restore Florida’s reef. Members of SCUBAnauts International and the Combat Wounded Veteran Challenge have been working with the Lab to plant corals since 2012. Between 2014 and 2016, they have helped plant more than 1,600 corals to restore the reef.

“We keep close track of the coral genotypes that we’re planting each year, and follow up monitoring shows us how well different types survive,” said Erich Bartels, Manager of Mote’s Coral Reef Monitoring and Assessment Program, who oversees the staghorn coral nursery project. “Monitoring of corals planted at our four restoration sites near Looe Key in 2012 showed an 85-percent survival rate of Mote’s transplanted staghorn corals after three years. And our volunteer divers from SCUBAnauts and the Combat Wounded Veteran Challenge have played a key role in making this happen — they provide the help we need to get the corals planted on the reef.”

The Combat Wounded Veteran Challenge (CWVC) improves the lives of wounded and injured veterans through rehabilitative, high-adventure and therapeutic outdoor challenges while furthering the physiological, biomedical and pathological sciences associated with their injuries. The veterans who participate in the outdoor challenges have suffered from traumatic brain injuries, PTSD or have lost limbs. Military medical personnel and prosthetic experts from Florida State University and Florida International University have participated to help evaluate the veterans’ recovery from injuries and develop next-generation prosthetics suitable for extreme aquatic activities.

“Our wounded servicemen and women make a powerful impact and example on youth and those who face similar circumstances,” said Ben J. Hayes, CWVC Vice Chair & President. “Through these Challenge experiences, they demonstrate to others that despite their injuries, they too can overcome seemingly insurmountable personal challenges, while advancing rehabilitative research and, in this case, restoring a coral reef that Floridians rely on in so many ways. ‘Challenge–Research–Inspire’ are the principles that govern our program, and our participants truly live up to them.”

SCUBAnauts International’s mission is to guide youths ages 12 through 18 along an exciting pathway for personal development by involving them in the marine sciences through underwater marine research activities, such as special environmental and undersea conservation projects, that build character, promote active citizenship and develop effective leadership skills.

“This unique partnership exemplifies SCUBAnauts' primary goal, which is to inspire our teens to develop empowering leadership skills, make informed decisions and build character,” said Paul Foisy, President & CEO of SCUBAnauts International. “As much as our veteran mentors influence our youth, I believe that our ’Nauts’ capability, dedication and passion can inspire our veterans just the same. These two seemingly different groups come together to embolden each other to make a positive, lasting impact on our environment.”

A special thank you to those who have supported this effort:

Mote Marine Laboratory & Aquarium has been an independent, nonprofit 501(c)3 research organization since it was created in 1955. Mote is based in Sarasota, Fla. with field stations in eastern Sarasota County and the Florida Keys, and Mote scientists conduct research on the oceans surrounding all seven of the Earth’s continents in more than 20 research programs.

AXYS Forms Partnership with Incostas in

Florida Corals Tell of Weather Past, For

Putting the Pieces Together: Using Resea