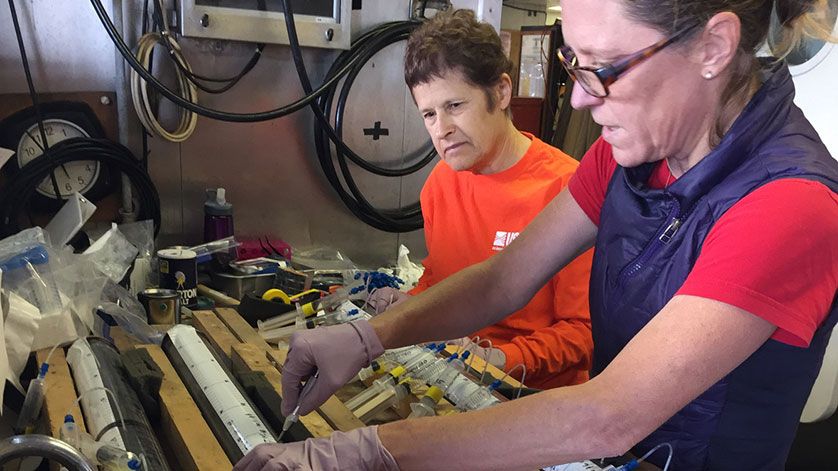 An international team of scientists just finished probing the depths of the Pacific Ocean offshore of Alaska and British Columbia, to better understand the Queen Charlotte-Fairweather Fault. During the past century, the 700-mile-long fault has generated at least half a dozen major earthquakes, and future shocks threaten coastal communities in both the United States and Canada.

Scientists from the U.S. Geological Survey, joined by colleagues from Natural Resources Canada, the University of Calgary, and the Sitka Sound Science Center in Alaska, spent 20 days at sea aboard the Canadian Coast Guard Ship, “John P. Tully.” The expedition covered more than 1,000 kilometers (620 miles) from the southern Haida Gwaii islands in British Columbia to Cross Sound near Juneau, Alaska. They were looking for clues to the future of a fault often compared to a more famous one in California.

“We can think of this fault system as the San Andreas of the north,” said Danny Brothers, a USGS research geophysicist. “It appears to be the fastest moving continent-ocean strike-slip fault in the world.” Speedy faults like the Queen Charlotte can trigger earthquakes and tsunamis more frequently than slower faults. 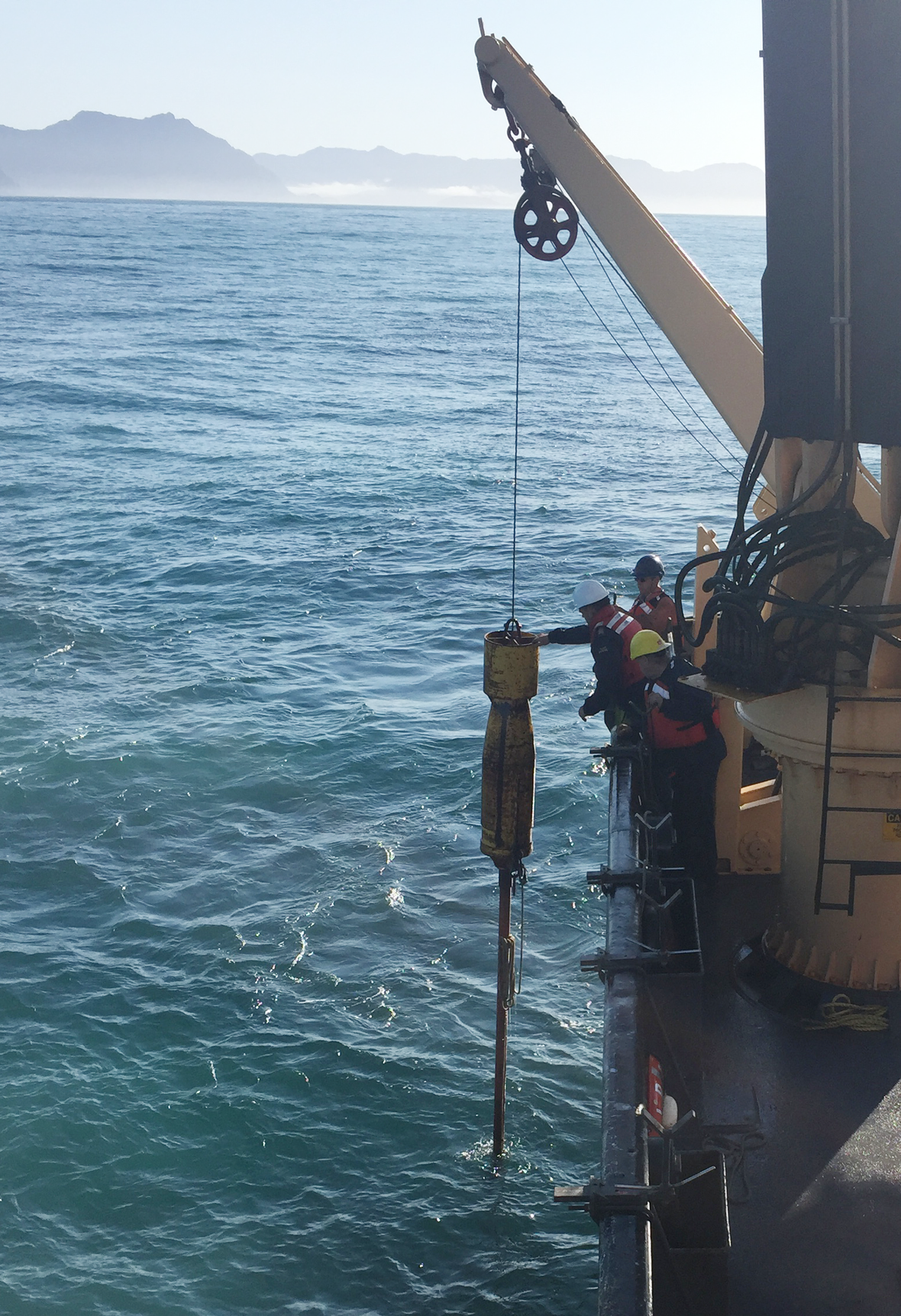 The scientists worked remotely through thousands of feet of water. Their tools included seismic-reflection surveys that use sound to reveal rock layers beneath the seafloor, piston cores that bring up the top several meters of ocean sediment for further scrutiny, and cameras with powerful lights dragged just above the seabed. The researchers plan to spend years analyzing their newly collected data to help regional residents, businesses, and governments prepare for the future.

Scientists prepare to lower a piston corer off Haida Gwaii, British Columbia, to sample seafloor sediment near the Queen Charlotte-Fairweather fault. Expedition scientists are studying layers of sediment in the cores they collected to identify and determine ages of past earthquakes along the fault. This information will help them assess future threats to coastal communities in the U.S. and Canada.(Credit: James Conrad, U.S. Geological Survey. Public domain.)

“Development of large-scale infrastructure, such as ports and [liquefied natural gas] plants in British Columbia and Alaska, need the best possible information on earthquake and tsunami risk,” said Vaughn Barrie, a research scientist with Natural Resources Canada, “and this collaborative project provides answers to many of these questions.”

As with many scientific expeditions, the researchers uncovered more than they planned. “We’ve discovered some incredible features,” said Jamie Conrad, a USGS geologist, “such as methane seeps and chemosynthetic communities, large submarine landslides, offset seabed morphology from fault motion, and volcanic edifices.”

Gary Greene, from the Sitka Sound Science Center, added: “This investigation and cruise has revealed a spectacularly active fault zone that probably represents the best-defined and most extensive transform plate boundary found anywhere on Earth,” referring to the long, knife-edge fault line along which the Pacific tectonic plate is moving northward relative to the North American plate. 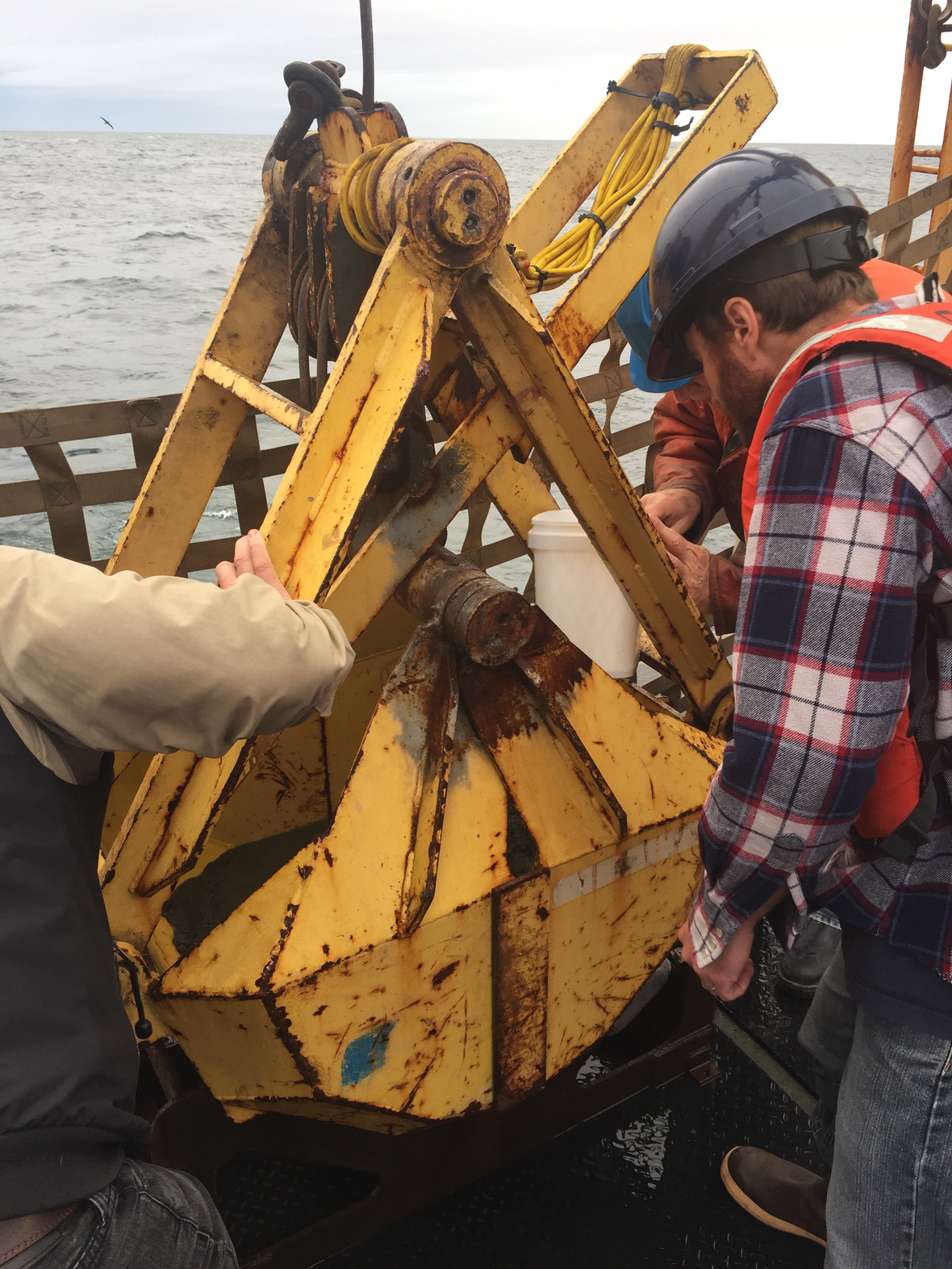 USGS research geophysicist Danny Brothers (right) and colleagues examine the surface of a sediment grab sample just pulled onto the deck of the Canadian Coast Guard Ship John P. Tully. The sample was collected from the top of a mud volcano north of the border between southeast Alaska and British Columbia. Expedition scientists are investigating the Queen Charlotte-Fairweather fault to better understand its history and the hazards it poses to coastal communities in the U.S. and Canada.(Credit: James Conrad, U.S. Geological Survey. Public domain.)

“This cruise has been a great opportunity to work with scientists that are truly pioneering our understanding of this complex system, and has generated the first dataset focused on illuminating the hydrogeology of the QCF through targeted coring of active seep sites,” said Rachel Lauer, Assistant Professor of Geosciences at the University of Calgary.

Canada and the United States joined forces in 2015 to begin focused explorations of this common offshore threat. “Faults don’t stop at the shoreline and they certainly don’t stop at political boundaries,” said USGS’ Brothers. “We are fortunate to have a strong partnership with the Natural Resources Canada’s Geological Survey of Canada, so that we can examine the fault system in its entirety."