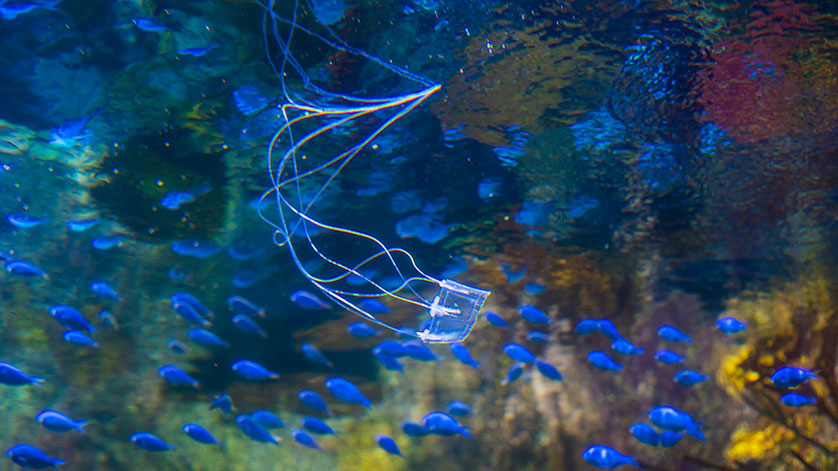 An innovative, eel larvae-like robot developed by engineers and a marine biologist at the University of California can swim silently in salt water without an electric motor.

Instead, the robot uses artificial muscle-inspired electrode chambers filled with a conductive ionic solution akin to seawater to propel itself. The foot-long robot, the first prototype of which is connected to an electronics board that remains on the surface, is also virtually transparent.

The team, which includes researchers from UC San Diego and UC Berkeley, detailed its work in the April 25 issue of Science Robotics. Researchers say the bot is an important step toward a future when soft robots can swim in the ocean alongside fish and invertebrates without disturbing or harming them. Today most underwater vehicles designed to observe marine life are rigid and submarine-like and powered by electric motors with noisy propellers.

“This robot, inspired from biology, will provide a novel platform with which a whole new set of ‘un-disturbed, non-invasive’ biological and behavioral data of aquatic communities will be possible to record,” said Dimitri Deheyn, a marine biologist at Scripps Institution of Oceanography at UC San Diego and a member of the research team, “thus opening a new window of opportunities for ecosystem observation, understanding, and management.” 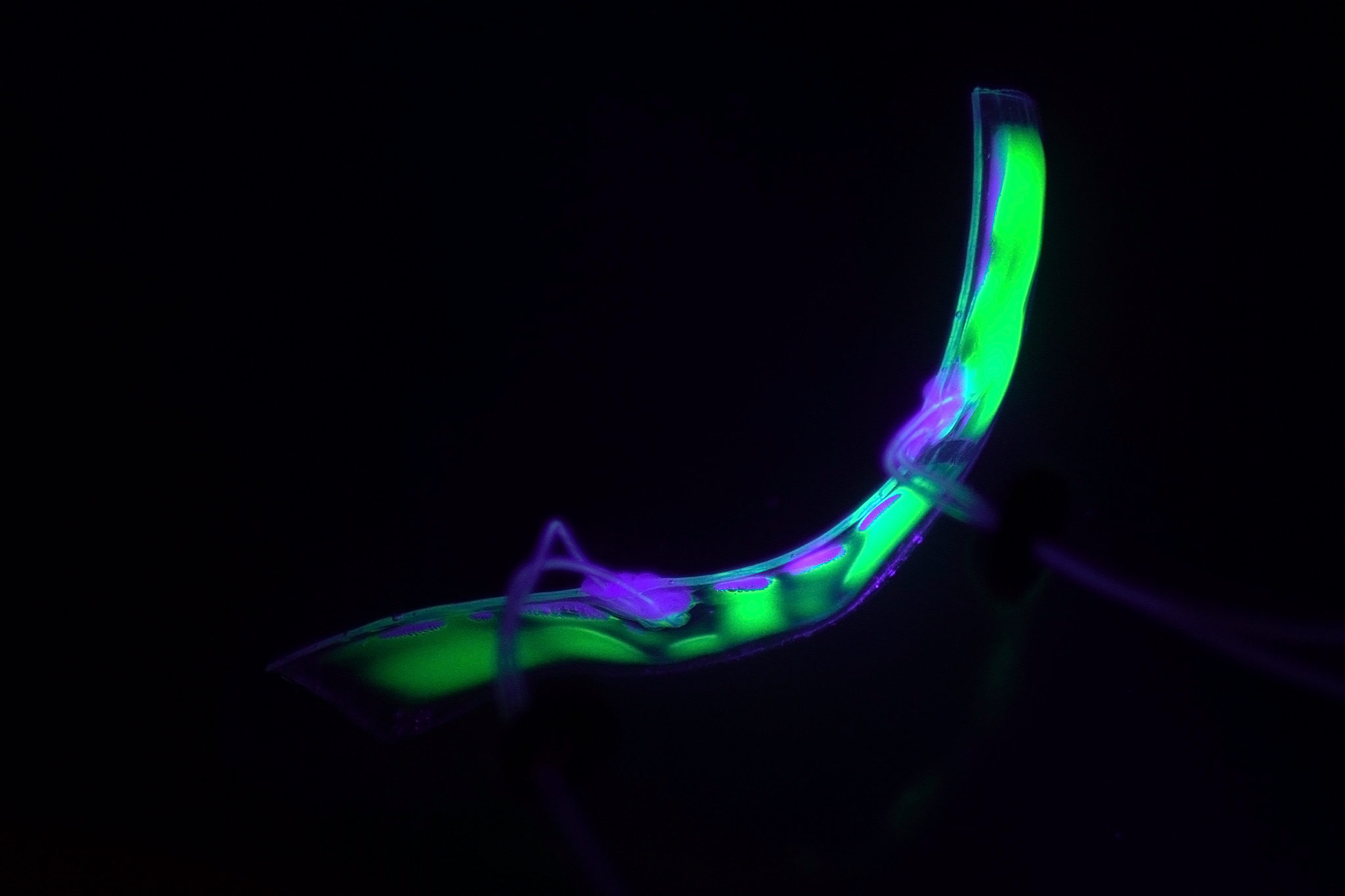 Fluorescent dye illuminates a robot inspired by eel larvae in a low-light setting. The dye helps researchers observe the robot during testing. In the future, fluorescence might be a mechanism for internal communication among sensors installed in the robot. Photo: Jacobs School of Engineering/UC San Diego

One key innovation was using the salt water in which the robot swims to help generate the electrical forces that propel it. The bot is equipped with cables that apply voltage to both the salt water surrounding it and to pouches of conductive water inside of its artificial muscles-like chambers. The robot’s electronics then deliver negative charges in the water just outside of the robot and positive charges inside of the robot that polarize the material and activate the muscle-like propulsion. Alternative changes of these electrical charges cause the artificial muscles to bend, generating the robot’s undulating swimming motion. The charges are located just outside the robot’s surface and carry very little current so they are safe for nearby marine life.

“Our biggest breakthrough was the idea of using the environment as part of our design,” said Michael T. Tolley, the paper’s corresponding author and a professor of mechanical engineering at the Jacobs School at UC San Diego. “There will be more steps to creating an efficient, practical, untethered eel robot, but at this point we have proven that it is possible.”

Previously, other research groups had developed robots with similar technology. But to power these robots, engineers were using materials that need to be held in constant tension inside semi-rigid frames. The Science Robotics study shows that the frames are not necessary.

“This is in a way the softest robot to be developed for underwater exploration,” Tolley said.

The robot was tested inside saltwater tanks filled with jellies, coral and fish at Birch Aquarium at Scripps and in Tolley’s lab.

The conductive chambers inside the robot’s artificial muscles were loaded with fluorescent dye to help researchers observe the robot’s activity. Deheyn said the fluorescence could serve an additional purpose in the future, being a mode of communications through which researchers activate or deactivate sensors within the robot.

Next steps also include improving the robot’s reliability and its geometry. Researchers need to improve ballast, equipping the robot with weights so that it can dive deeper. For now, engineers have improvised ballast weights with a range of objects, such as magnets. In future work, researchers envision building a head for their eel robot to house a suite of sensors.

“This robot is just the beginning and it has a bright future ahead, especially for communities currently difficult to observe using traditional means,” Deheyn said.

The research was supported with a grant from the Office of Naval Research. Christianson is supported by a National Science Foundation Graduate Research Fellowship. Deheyn’s work on the fluorescence was funded in part by the Lounsbery Foundation.