The Rise of Orpheus 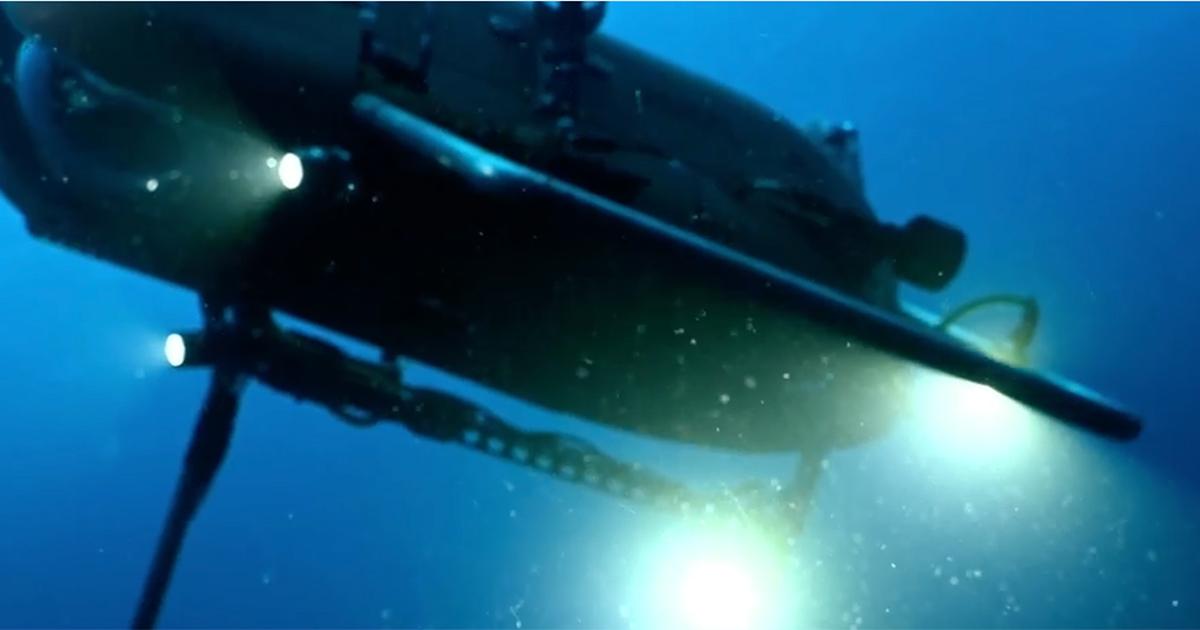 Just as the first jaw-dropping images of deep-sea tubeworms and clams changed our understanding of life when hydrothermal vents were discovered in the 1970s, exploring the hadal zone—the deepest region of the ocean (named after Hades, king of the underworld realm in Greek mythology)—may yield new clues about the limits of life on Earth, and possibly beyond.

This is according to Tim Shank, a deep-sea biologist at Woods Hole Oceanographic Institution (WHOI), who is on the R/V Neil Armstrong headed to a vast, underwater canyon along the New England continental shelf. There, he and his team will field test Orpheus, a bright-orange ocean robot that he and WHOI engineer Casey Machado designed to explore this dark and mysterious layer of the ocean.

“Hadal trenches are among the least explored environments on our planet,” says Shank, who heads up the institution’s HADEX (short for Hadal Exploration) deep ocean exploration program. “We know very little about what species live down in these habitats, what the biological diversity looks like, and how life there has evolved to withstand and thrive under extreme conditions.”

Orpheus, named after one of the legendary figures in Greek Mythology who made it to the underworld and back, represents a new class of autonomous underwater vehicle (AUV) that Shank says will enable access to explore this last frontier on Earth. The ‘what’s down there?’ question is key, but his interest in this unknown universe six miles beneath the ocean’s surface runs far deeper.

“Certain novel adaptations that enable species to exist under hadal conditions could lead to promising medical treatments, and offer clues about the rise and evolution of life itself,” says Shank.

He adds that if Orpheus is successful in withstanding the extreme pressures of the deep, the technology could be leveraged to explore ocean worlds beyond Earth with similar environments, like Europa and Enceladus, the moons of Jupiter and Saturn, respectively. 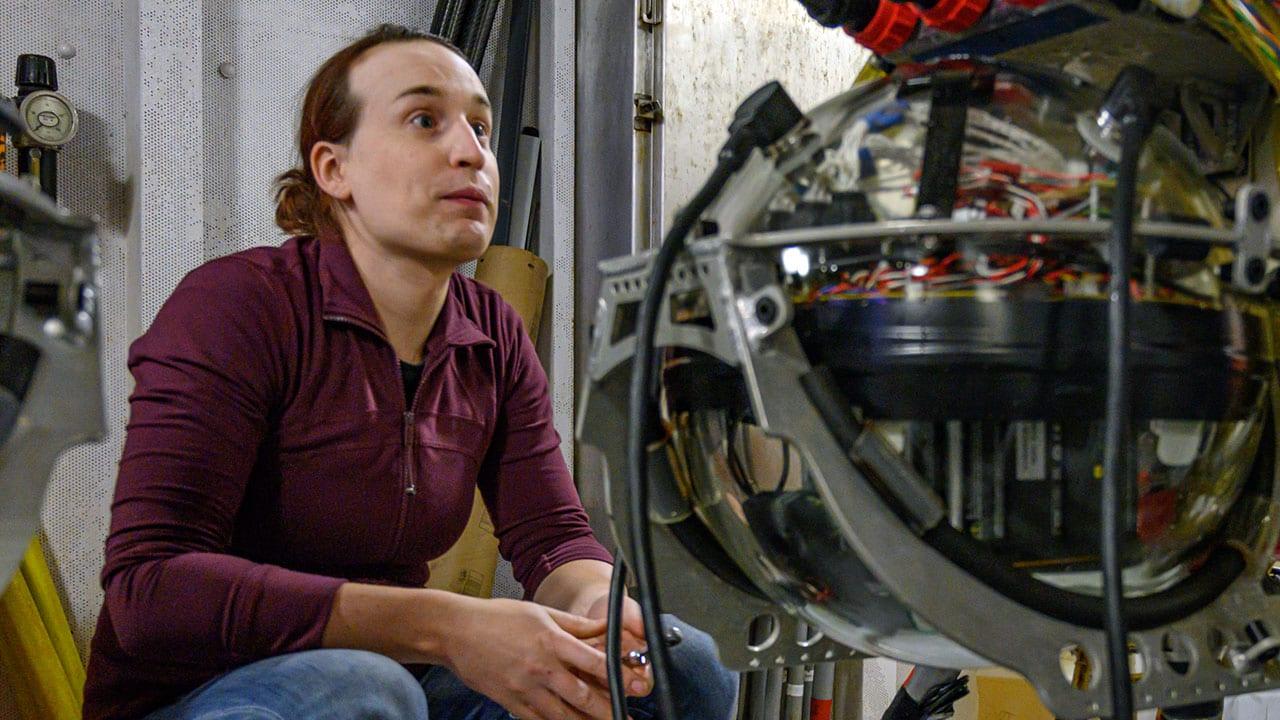 WHOI mechanical engineer Casey Machado sits in the ship’s staging bay before Orpheus’s first plunge of the expedition. The vehicle’s electronics are housed in a glass sphere, shown in the foreground, which can tolerate the extreme pressure of the deep, and is one of many cost-saving measures that went into the vehicle’s design. Photo credit: Evan Lubofsky, Woods Hole Oceanographic Institution

The seas are calm as Neil Armstrong draws closer to a steep-sided submarine valley known as Veatch Canyon. There, Orpheus will make its first of three dives in the open ocean, a place it hasn’t been to since 2018 when Shank and his team conducted initial field tests of the vehicle aboard OceanX’s vessel, the M/V Alucia. The expedition is an incremental yet vital step in the robot’s formative stages, one aimed at garnering confidence in the vehicle’s capabilities before it makes its plunge into full-ocean depth territory in 2020.

Machado pops into the garage holding a medicine-ball-sized glass sphere. Inside is a tangle of colorful wires and cables—the circuitry of the robot’s nervous system. She and WHOI electrical engineer John Bailey spent the last half hour running it through a series of diagnostics in the ship's main lab next door. It is now time to reattach Orpheus’s brain to its body (roughly the size and shape of a mechanical bull), which is covered in a thick layer of off-white syntactic foam. The foam—donated by filmmaker and ocean explorer James Cameron—was fabricated to withstand pressures that are more extreme than those found at the full 11,000-meter (36,000-foot) depth of the ocean. Cameron had used the custom-designed material in his own human-occupied hadal vehicle, Deepsea Challenger.

“Orpheus bridges a critical gap in our nation’s ability to access and explore the deepest parts of our ocean,” says Cameron. “I’m thrilled that the technological legacy of the Deepsea Challenger is at the core of this new developing fleet of hadal AUVs.”

Using glass to house the electronics is one of many cost-saving measures Machado and her team have taken to minimize the financial risks associated with a catastrophic vehicle failure—one that the punishing pressures of the deep could cause. Nereus, a hadal robot prototype developed at WHOI in 2011, imploded after reaching a depth of 10,000 meters in the Kermadec Trench northeast of New Zealand in 2014. From Machado’s perspective, Orpheus represented a chance to scale things down.

“I did a cost analysis and tried to come up with the most cost-effective ways to do everything we really needed to do,” says Machado. “The philosophy was, everything on the vehicle had to be super-necessary or it wasn’t included.”

Shank says another reason for the cost-conscious design of Orpheus relates to one of the HADEX program’s key goals: having a fleet of low-cost, full-ocean depth vehicles. “We want an armada of these vehicles down there,” he says.

Collectively, the ocean’s hadal zone covers an area about as large as Australia—that’s a lot of space to cover. Shank says the idea is that, rather than relying on a single vehicle that costs millions of dollars, there could be twenty or more lower-cost robots exploring hadal trenches cooperatively. A second vehicle—Eurydice—has already been built to help cover more of the hadal zone in less time.

A blender-like sound cuts through the air, then stops, and then whirs again. Russell Smith, a young engineer from NASA’s Jet Propulsion Laboratory (JPL), enters the garage, where the scent of ship diesel hangs in the air. With his space-gray Macbook, he starts toggling the robot’s thrusters on and off. He completes the sweep and moves on to the lights and other functions, making sure all systems are a go for Orpheus’s first dive.

JPL engineers have been collaborating with WHOI on the Orpheus project since 2017. They’re interested in autonomous vehicles that can withstand the pressures at the bottom of the ocean, an environment that Smith says is a good analog to the pressures that exist in ocean worlds beyond Earth. He and his colleagues are writing software that will allow the robot to build three-dimensional maps of the seafloor by stitching together images of features it sees, such as rocks and clams. These terrain maps will enable Orpheus to navigate the deep, and independently recognize features along the seafloor that may be of scientific interest to Shank and others.

“The big trick here is that the bottom of the ocean is super murky and dark and there’s a lot of stuff floating around in the way,” says Smith. “There’s a lot of visual distortion that you have to get rid of to create the maps, so it’s really challenging from that perspective.” 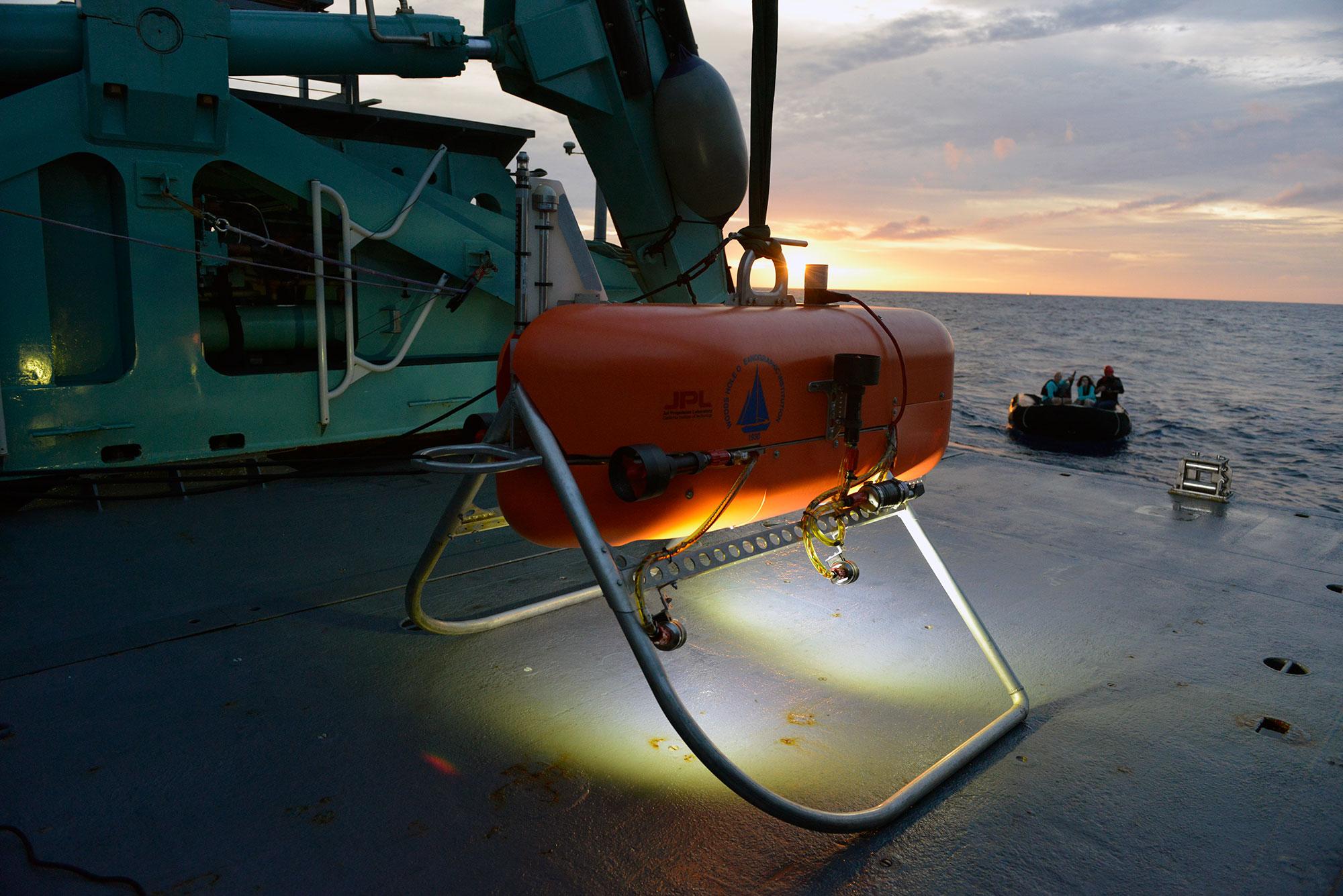 Orpheus is hanging off Neil Armstrong’s crane hoisted a dozen feet above the Atlantic. The winch motor groans as Orpheus is gently eased into the blue water. The blur of its orange body becomes obscured as the robot is tethered 10 meters below the surface. It’s not very deep for a hadal vehicle, but enough to get the robot’s systems wet to ensure nothing is malfunctioning.

An hour later, the ship's crane starts whining again as Orpheus is hauled up from the sea. On deck, it’s gently placed onto a dolly and carted back to the garage, where Machado and Bailey begin working the robot over in pit-crew fashion.

The next day, just as Orpheus is supposed to take another dunk, the sky goes from a yawn to a tantrum as a squall rolls in. Heaving seas crash over the side of Neil Armstrong as the ocean surface becomes lined with a scrim of angry indigo ribbons. A few hours later, the storm moves out and Orpheus completes dive #2. So far, so good.

The pressure to adapt

The extreme pressures of the deep may have forced hadal robots to evolve, but the real adaptations have occurred within deep-sea animals themselves. Taylor Heyl, a deep-sea biologist in Shank’s lab, says some of the most novel adaptations relate to how certain hadal creatures seem to correct for poorly-functioning proteins.

“The high pressures can make cells too small for proteins to work properly,” she says. “Some species have adapted by using enzymes called piezolytes that surround water molecules to increase space inside their cells and counteract the pressures.”

Shank says that when proteins become dysfunctional in humans, the result is often disease, such as Alzheimer's. So, he wants to take a closer look at what’s controlling the protein stability of hadal animals by bringing them up from the deep and comparing their genomes with those of healthy people and those afflicted with disease.

“There’s a strong genetic basis for use of these hadal animals in society,” he says, “so we need to look at these adaptations on a genetic level.”

Today, Orpheus will plunge more than 1,600 meters into Veatch Canyon—the deepest it’s ever gone. If all goes to plan, it will explore for a few hours and make it back up by dinnertime.

The dinner menu on the board outside the mess hall looks good—grilled mahi, roasted mixed vegetables, tossed salad, as does the weather. But no one seems to be thinking about either right now: at this point, it’s all about robot readiness.

Machado is in the staging bay pumping fluid into a junction box of wires inside the robot’s glass housing. It’s a curious sight that runs counter to the general principle of keeping circuitry dry.

“Mineral oil compensates for depth, so we use it to protect the electronics from the extreme pressures rather than physical housings, which add weight,” she says.

Once again, Orpheus is hoisted above the water by crane and slowly submerged. As the safety line is cut, the robot is swallowed whole by the canyon. The engineers head straight to the ship's computer lab, where Shank is stationed, to get an early view of the mission. The robot is dropping 30 meters per minute, and should be at the bottom within an hour.

The afternoon flies and suddenly it’s approaching 5:00 p.m. Orpheus has been surveying the submarine canyon like a grasshopper, landing on one spot, capturing video, and then jumping up and flying over to the next spot. One of the monitors in the computer lab shows the vehicle at a depth of 1,623 meters. According to Smith’s mission script, is expected to ignite a burn wire twelve minutes from now that will cause its weights to drop and the vehicle to surface.

Twelve minutes pass. The 1,623-meter figure on the monitor doesn't budge. Orpheus is on the bottom of the ocean, and it isn’t moving. The scientists and engineers watch with baited breath.

What will happen next?

Find out in Part II of "The Rise of Orpheus"—coming soon on the Woods Hole Oceanographic Institution website.

900% Rise in Demand for Remote Inspectio