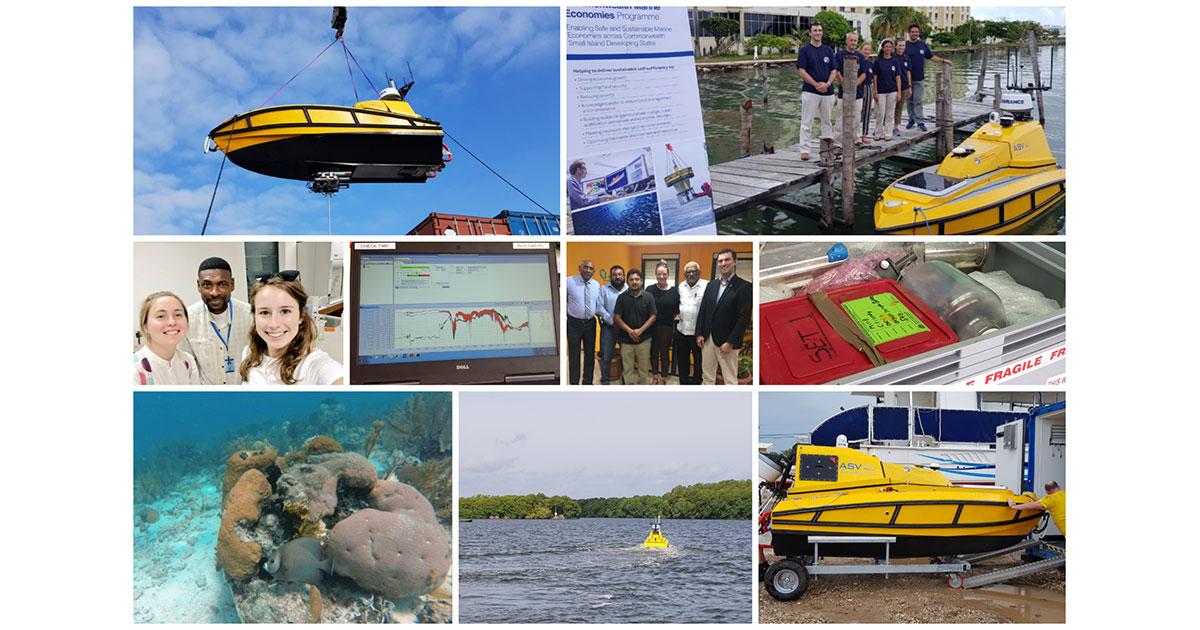 Scientists and engineers from the National Oceanography Centre (NOC) were in Belize last month conducting research as part of an ongoing program of collaborative multi-disciplinary fieldwork that aims to help understand the impacts of climate change and human activities on coastal environments.

This work is part of a research campaign funded by the UK Government’s Commonwealth Marine Economies (CME) Programme that involves NOC scientists working alongside colleagues from the Coastal Zone Management Authority and Institute (CZMAI) in Belize, the Belize Port Authority, the Turneffe Atoll Sustainability Association (TASA), the University of Belize, the UK Hydrographic Office (UKHO) and the Centre for Environment, Fisheries and Aquaculture Science (Cefas).

The team has deployed an innovative portable marine science laboratory known as CAMEL (Containerized Autonomous Marine Environmental Laboratory), conceived and developed by the NOC in partnership with L3 Harris (formerly ASV), which saw its first use outside of the UK in Belize in October 2018. The CAMEL facility consists of an autonomous surface vehicle (ASV), C-Worker 4, and a mini remotely operated underwater vehicle (ROV), as well as a fully-featured mobile laboratory, control center and a small inflatable boat with outboard motor.

For the first time the C-Worker has been deployed at Turneffe Atoll – the largest Atoll on the Mesoamerican Reef – to survey the lagoon and assess the impact of sea-level rise on sensitive mangrove environments. Other surveys have also been conducted within Marine Protected Areas and across important shipping lanes around Belize City. Together these surveys are helping to characterize the sensitivities of the marine environments to the impacts of climate change and human activities, and are providing the best possible data to support decision makers in managing Belize’s coastal environments.

The C-Worker ASV within the facility is capable of delivering a range of marine surveying tasks, safely and cost-effectively, through the integration of bespoke payloads and equipment, and can be operated remotely or autonomously. In autonomous mode the vehicle follows a programmed course without requiring operator intervention. The vehicle is designed to carry different, easily swappable payloads - a hydrographic payload which comprises a high-grade multibeam echo sounder; a geophysical payload with a high-grade side scan sonar system and sub-bottom profiler; and an oceanographic payload made up of a variety of sensors such as Acoustic Doppler Current Profilers (for measuring currents), salinity and temperature, pH sensors, and dissolved oxygen. The ROV is fitted with high resolution imaging systems that are being used to visually assess the impact of changing ocean properties on the health of coral reefs in the region.

Program lead, the NOC’s Dr. Christopher Pearce, said: “Effective coastal management and decision making requires high quality data, and the CAMEL facility was designed to enable precisely this sort of research that we are carrying out with our partners in Belize under the CME Program. The extensive surveys being delivered by the CAMEL facility are helping us to understand more about the region’s marine environment, and alongside water testing, sea bed core sampling and real-time monitoring of ocean properties, we will be able to better characterize the impacts of changing land use and environmental conditions on vulnerable and valuable ecosystems.

“Another hugely important aspect is how the CME program is helping to build strong, collaborative and mutually beneficial relationships with colleagues and organizations in Belize, and we hope to be able to further develop these relationships in the months and years to come.”

The surveys are funded through the UK Government’s CME Program, which has delivered world leading expertise in marine science since 2016 through a strategic partnership of the National Oceanography Centre (NOC), the United Kingdom Hydrographic Office (UKHO), and the Centre for Environment, Fisheries and Aquaculture Science (Cefas). By collecting data, undertaking scientific research and delivering state-of-the-art capacity building, the program aims to support Commonwealth Small Island Developing States (SIDS) to sustainably manage and use their marine resources.