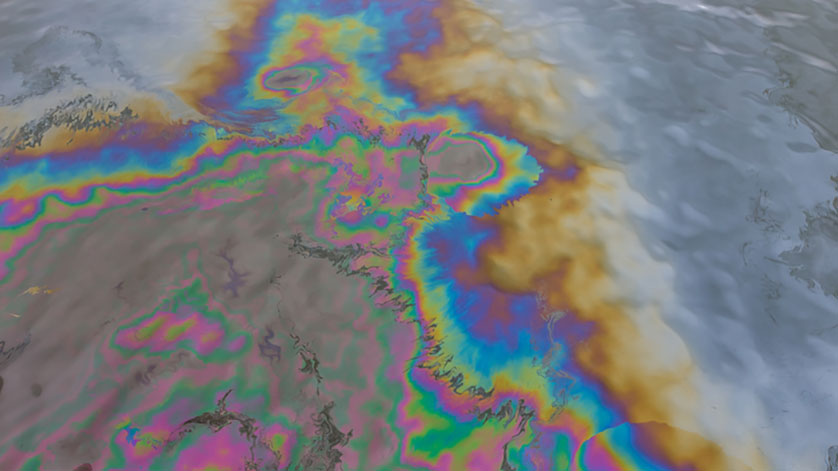 The impact of a subsea oil well blow-out in the Faroe-Shetland Channel on the diverse deep-sea life there partly depends on the depth and when it happens, according to new research by National Oceanography Centre (NOC) scientists.

Lead author, Dr. Charlotte Main, who conducted this research at NOC, said “previously, when assessing the potential impact of an oil blow-out, the focus was on what was happening at the surface. However, this research shows the importance of what the oil is doing at depth, particularly for deep-sea life. This is significant because oil extraction is increasingly happening at depth and oil dispirsants, as well as other factors, mean that some oil never reaches the surface.”

One of the regions under exploration are the deep waters of the Faroe Shetland Channel, north of Scotland. The deep sea is an important habitat for a diverse array of marine life, yet if a prolonged oil spill were to happen, the complex ocean currents in and around this region of the North Atlantic would present challenges to predicting or understanding its impacts.

Scientists at NOC have used the state-of-the-art NEMO ocean circulation model, alongside a particle-tracking algorithm, to simulate the plume from a subsea oil blow-out. The results have been published in the journal Marine Pollution Bulletin and show that the distance an oil plume would reach depends on both its release depth, and the surrounding ocean circulation, which itself changes from season-to-season and, year-to-year.

Dr. Charlotte Main added “Currents in the Faroe-Shetland Channel are extremely variable and move in opposite directions between deep and surface waters, so while a surface slick might be carried northeast towards Norway, deep, undersea oil plumes would be carried west towards the Iceland basin.”

The diverse marine life in the Faroe Shetland Channel is partly a product of the temperature gradients between cold Arctic bottom water underlying warmer currents at the surface - but these same gradients will also effect the dispersion and distribution of the oil. Warmer surface currents travel faster, and are more biologically active, allowing for the biodegredation of the oil. Conversely, biodegradation is relatively slow in the colder, bottom waters allowing plumes to be transported over longer distances.

Co-author Dr. Andrew Yool, also from NOC, said “This is an excellent example of a potential application NOC’s world-leading ocean circulation models, and forms part of our on-going research into the impacts of this circulation.”

This study received funding through the Natural Environmental Research Council (NERC) and the University of Southampton. The modelling component was funded through NERC’s National Capability programme. The study was done as part of the SERPENT project.