The Edge of Darkness: WHOI Researchers to Dive into the Twilight Zone 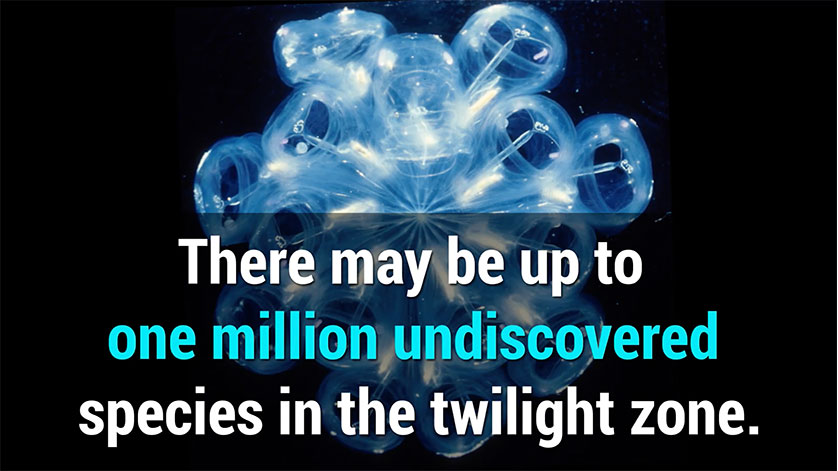 The Woods Hole Oceanographic Institution has received $35 million private grant to explore one of our planet’s hidden frontiers—the ocean twilight zone. The project will combine exacting science, innovative technology, and broad engagement to turn knowledge into actions that improve understanding of our planet and how to live sustainably on it.

At 200 to 1000 meters below the ocean’s surface, sunlight is barely a glimmer, yet flashes of bioluminescence give us a clue that these waters teem with life. In fact, the twilight zone is believed to be home to more than one million new species, and up to 90 percent of the world’s total fish biomass. The world’s largest animal migration takes place here every day. Yet, the region has been largely unexplored.

Most life forms in the twilight zone are tiny—a few inches or less—but some, such as gelatinous siphonophores, can form chains that extend as much as 130 feet, making them among the biggest animals on Earth. But even the smallest twilight zone inhabitants can be powerful through sheer number. A tiny but fierce-looking fish called a bristlemouth is the most abundant vertebrate on Earth. And the combined biomass of all twilight zone fish may be more than in the rest of the ocean combined.

This biological abundance makes the twilight zone an attractive target for commercial fishing operations. However, much of the twilight zone lies beyond national boundaries, in the “high seas” where relatively few laws or regulations apply.

Heidi Sosik told a TED Conference audience in Vancouver, British Columbia that the goal is not to ban fishing, but to answer vital scientific questions about how to manage it sustainably before large-scale before large-scale fisheries have an “irreversible global scale impacts on marine life and food webs.”

“How amazing would it be to take a different path this time,” Sosik said. “The Twilight Zone is indeed a global commons. We need to first understand it before we can be responsible stewards and hope to fish it sustainably.”

Project Scientist Heidi Sosik will apply three decades of oceanographic research experience in the lab and at sea to shape the direction of this project. She will be joined by famed Ocean Systems Engineer Andy Bowen and WHOI Director Mark Abbott who will guide WHOI’s continued commitment to twilight zone study and will manage a team of hardware and software developers to assess technology trends and emerging science needs.

With this mission, WHOI aims to form a new body of knowledge that will promote responsible stewardship of the ocean and shed new light on our planet. They will do this by continuing their groundbreaking work developing new generations of smart robots and other tools necessary to explore the twilight zone. Scientists, engineers and technicians at WHOI will begin by deploying autonomous underwater vehicles and sensors in the Atlantic Ocean, offshore from the recently created Northeast US Shelf Long-Term Ecological Research (LTER) site. This will set the stage to opening the twilight zone to comprehensive study, laying the groundwork for a network of hardware, software, and data throughout the ocean worldwide.

Funding for this project comes from The Audacious Project, housed at TED, which invites change-makers to submit their best, boldest ideas for tackling the world’s biggest challenges. Learn more here.