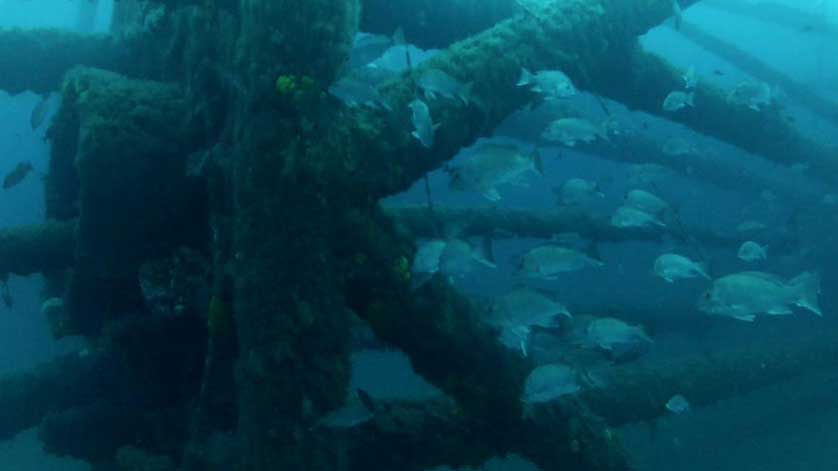 Sportfish expert Dr. Greg Stunz of the Harte Research Institute (HRI) for Gulf of Mexico Studies at Texas A&M University-Corpus Christi traveled to Washington D.C. Wednesday, May 17, to testify before Congress about the success of Texas’s artificial reef program.

Stunz is Director of the Center for Sportfish Science and Conservation (CSSC) and HRI’s Endowed Chair for Fisheries and Ocean Health. Partnering with the Texas Department of Parks and Wildlife’s Rigs-to-Reefs program, Stunz and his research group have spent the last several years conducting a thorough and rigorous monitoring program of Texas’ broad network of artificial reefs through the use of acoustic tagging, diver surveys, Remotely Operated Vehicles (ROV) and Vertical Line surveys. The Sportfish Center is also looking into how these habitats are used by environmentally important species like sharks as well as commercially and recreationally important species like Red Snapper.

Stunz was invited to speak before the House Subcommittee on Energy and Mineral Resources to provide a scientific perspective on the successes of Texas’ program. It was the first time Congress has addressed the program since 2003 and comes at a time when these rigs, regarded as one of the largest man-made reef complexes in the world, are being decommissioned and removed at an accelerated pace.

“We have been surveying reefed platforms in the northwest Gulf of Mexico since 2012, and our work documents a variety of species inhabiting these structures from small reef fishes to large sharks,” Stunz said in his testimony. “Rigs-to-Reefs structures act as recruitment habitat for juvenile fish and are important to a variety of species at different life stages. We have documented an array of economically important species residing at Rigs-to-Reefs habitat, highlighting the economic value of these structures to enhance fisheries.”

“A central question of our research is, ‘How do to these structures perform in relation to mother nature — natural bottom habitat?’ I am pleased to report that in every parameter we use to measure success for Rigs-to-Reefs, we see that artificial reefs perform at least as good if not better in all cases. For example, we observe higher densities of fish, faster growth or at least the same growth rate, and even similar reproductive output when compared to natural bottom. Thus, by all measures, our data shows Rigs-to-Reefs are functioning equivalently or better, and contribute similarly on a per-capita basis as natural habitat.”

Due to oil and gas exploration, the Gulf of Mexico currently hosts as many as 3,000 platforms — the largest complex of artificial reefs in the world. Since the 90s, Texas has operated an Artificial Reef Program, converting decommissioned oil platforms, ships and other material into a flourishing network of artificial reefs that enhance recreational and commercial activities such as fishing and diving.

There has been some debate over whether these rigs actually produce new life in the Gulf of Mexico or simply attract what was already present to create a flourishing habitat. Stunz testified that the Sportfish Center’s research on Texas’ artificial reefs have found a mixture of both and that attracting fish can actually be a positive thing because it also attracts recreational anglers and divers who might otherwise seek out more sensitive natural habitats.

“In my opinion, from a practical standpoint and particularly at the federal level, Rigs-to-Reefs is an under-utilized option in the fisheries manager’s toolbox,” Stunz concluded in his testimony. “They produce fish, reduce pressure on natural systems and are a wonderful example of the partnership between the oil and gas industry and resource managers, where both the Gulf environment and economy benefit. However, time is not on our side with Rigs-to-Reefs. The decommissioning and removal of what is widely regarded as the largest man-made reef complex in the world is happening at an accelerated pace, and the opportunity to access this habitat resource will not long be available. My advice would be to encourage you to take an active interest to ensure as much of this habitat stay in the water as possible.”

ROVOP Celebrate European Success with a