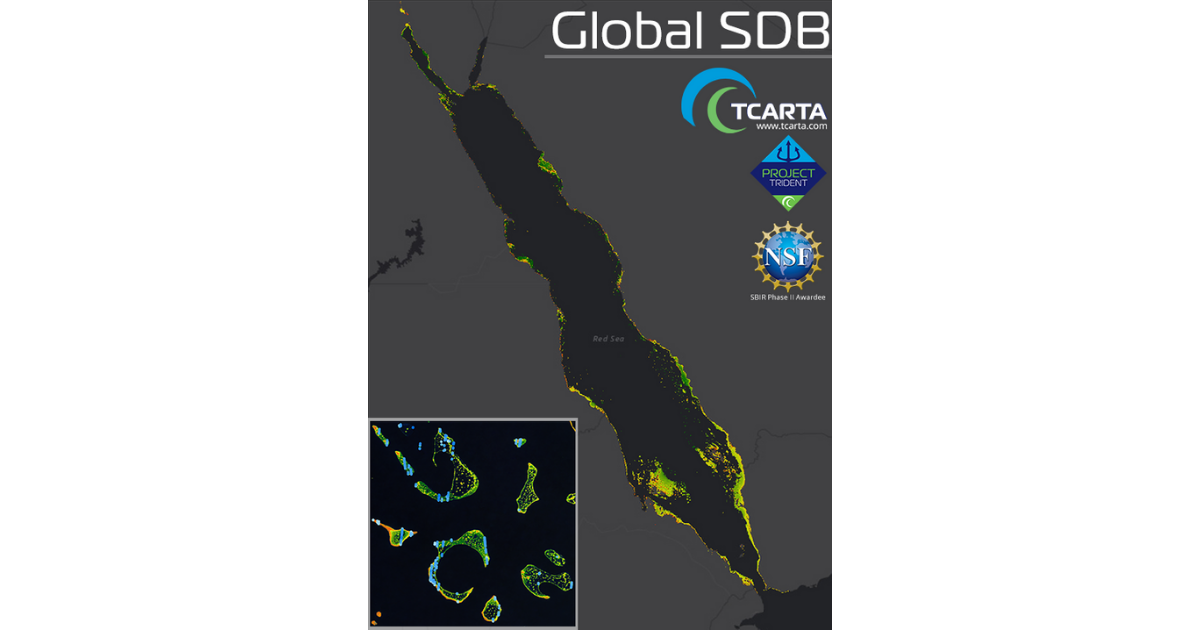 The first G-SDB offering covers the entire Red Sea – available now – with additional data sets rolled out through the end of this year.

The commercial TCarta G-SDB data sets and the state-of-the-art seafloor measurement workflow that produces them were made possible through a Small Business Innovation Research Grant from the National Science Foundation (NSF).

G-SDB data sets contain bathymetric measurements to depths of more than 30 meters, depending on water clarity, at 10-meter resolution. The depth values for every 10m pixel are the combined result of numerous measurements, resulting in accuracy within 10% of depth or less, and providing a seamless water bottom surface map. G-SDB will be available globally for all oceans and seas, as well as large freshwater lakes where water conditions permit.

TCarta launched Project Trident with NSF funding in 2018 with the goal of refining traditional satellite-derived bathymetry technology to extend its application into areas where it had not typically been successful, usually due to the turbidity or clarity of the water column. TCarta developed the new method using machine learning to iteratively evaluate Sentinel 2A/B multispectral satellite images, and even individual pixels within images, to select the sharpest and clearest ones for application of SDB extraction.

“Thanks to the power and speed of cloud computing, we run the extraction algorithm repeatedly and on multiple satellite images acquired over the same geographic area on different dates,” said Goodrich. “This dramatically increased the accuracy confidence in each depth measurement and minimizes data gaps.”

To further enhance the accuracy of the SDB measurements, TCarta has developed a first-of-its-kind AI-based technique for leveraging ICESat-2 data to train the SDB algorithm and validate results. Designed for polar ice elevation and tree canopy measurements, the ICESat-2 satellite carries a laser that captures remarkably accurate bathymetric data. The TCarta technology is believed to be the first commercial bathymetric application of ICESat-2 data.