Taking the Surprise out of Hurricane Season 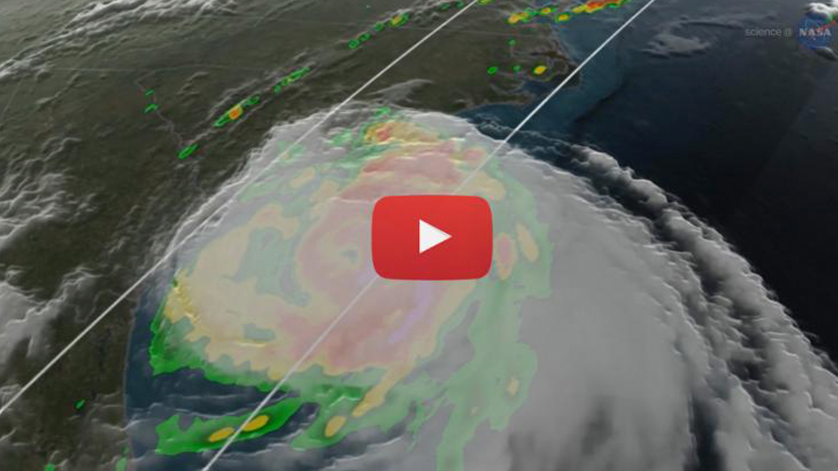 Prior to the 1960’s, the biggest storms on Earth could take people by surprise. Someone standing on a beach in Florida might not know if a distant bank of clouds was a routine squall or … the harbinger of a powerful hurricane.

The Space Age changed all that. Satellites orbiting the Earth can image, probe, and track hurricanes, alerting forecasters and laypeople alike to storms in the offing. In recent decades, the introduction of supercomputers and physics-based models of storm dynamics, combined with satellite, airborne, and surface data, have pushed the accuracy of forecasts issued by the National Oceanic and Atmospheric Administration (NOAA) to a new level of precision.

As forecasters have improved storm tracks, however, an area of forecasting has lagged behind: predicting the intensity of storms. In other words, how strong will the winds be blowing when a hurricane makes landfall?

Scott Braun, hurricane expert at NASA’s Goddard Space Flight Center in Greenbelt, MD says, “From 1990 to around 2010, there wasn’t much improvement in the accuracy of hurricane intensity forecasts. In the last several years, we have started to see drops in intensity forecast errors. This can be credited to a number of factors, including better measurements from satellite and airborne platforms, improvements to the physics in numerical weather prediction models, and improved methods of ingesting NOAA and NASA data into models that describe the state of the atmosphere.”

An important part of predicting intensity is seeing what’s going on deep inside a storm. Evaporation of water from the warm ocean surface powers hurricanes and causes them to intensify. Hotter sea surface temperatures at the base of a storm, therefore, can load a hurricane with more energy. On the other hand, wind shear can tear a storm apart, causing it to weaken.

So, how do you collect data from inside a giant storm?

First, you can fly right into it. In recent years NASA has sent research aircraft directly into or over storms as part of the Genesis and Rapid Intensification (GRIP) experiment in 2010 and the Hurricane and Severe Storm Sentinel (HS3) mission from 2012-2014. These aircraft were flown to investigate the formation and intensification of storms. Operational airplanes such as NOAA’s P-3s and the Air Force’s C-130s are hurricane hunters, and fly missions into the heart of storms to collect valuable airborne data sets. Additionally, NOAA’s Sensing Hazards with Operational Unmanned Technology (SHOUT) program utilizes a NASA unmanned Global Hawk aircraft to observe and predict high impact oceanic weather. You can also get a view from an eye in the sky. The Global Precipitation Measurement (GPM) Core Observatory, a joint mission between NASA and the Japan Aerospace Exploration Agency (JAXA), launched in February 2014 and carries instruments that show precipitation location and intensity at higher resolutions than were previously available.

Microwave imagers such as the one onboard GPM can look through the cloud tops to observe where and how much precipitation occurs. Additionally, GPM’s Dual-frequency Precipitation Radar provides a 3D view of precipitation structure.

Dalia Kirschbaum, a deputy project scientist for GPM says, “Images from GPM and similar sensors are posted on the internet in near real-time so forecasters can immediately see the latest data.”

An upcoming NASA mission aims to improve storm intensity forecasting even more. The Cyclone Global Navigation Satellite System (CYGNSS) is scheduled to launch in 2016. CYGNSS’s eight micro-satellites will utilize Global Positioning System (GPS) signals to make surface wind measurements. Direct GPS signals will pinpoint CYGNSS observatory positions, while GPS signals reflected off of the ocean surface will indicate wind speed based on how much the winds rough up that surface (the stronger the winds, the rougher the ocean surface).

CYGNSS will be able to measure winds in heavy rain regions inside the storm where current wind-sensing satellites have problems, and will provide much more frequent observations compared to the once- or twice-a-day measurements from current sensors.

Earth-orbiting satellites: helping take the surprise out of hurricane season since the 1960s.

Testimony: Decision to Navigate Too Clos

Why the Severity of the 2017 Atlantic Hu

Equinor to Clean Up Oil Spill in the Bah

GlobalGiving and BSCA Create Disaster Re