Taking the Lab into the Ocean with Autonomous Robotic Fleets 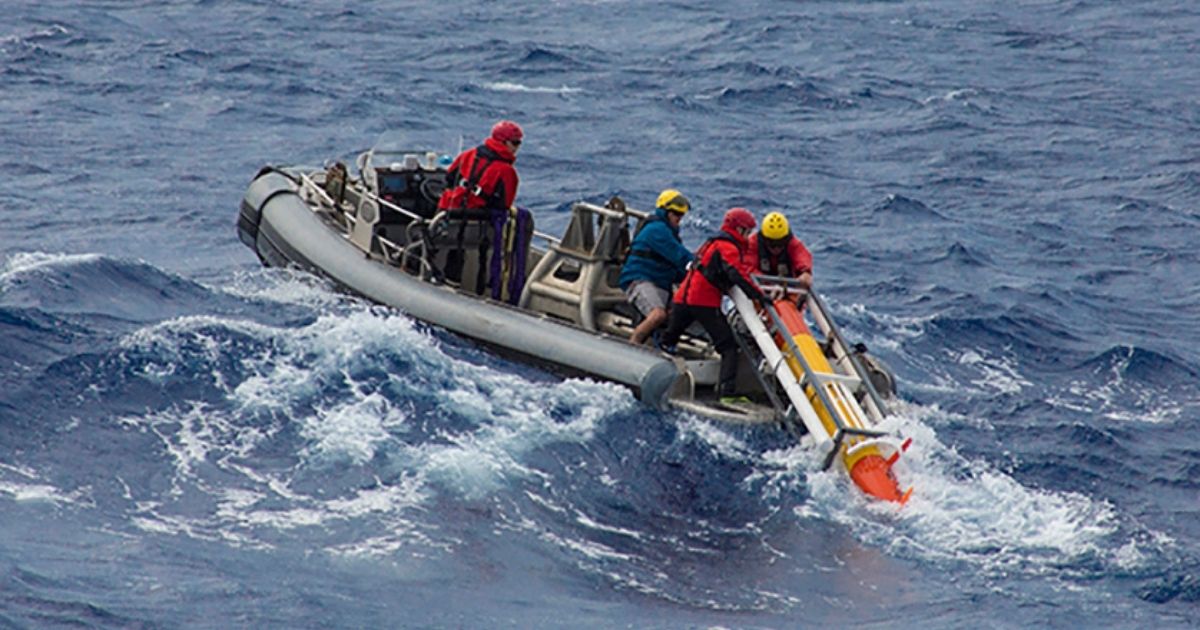 Researchers from MBARI, the University of Hawai‘i at Mānoa (UH Mānoa), and Woods Hole Oceanographic Institution, after years of development and testing, have successfully demonstrated that a fleet of autonomous robots can track and study a moving microbial community in an open-ocean eddy.

The results of this research effort were recently published in Science Robotics.

Autonomous robotic fleets enable researchers to observe complex systems in ways that are otherwise impossible with purely ship-based or remote sensing techniques. In a time when the COVID-19 pandemic is reducing opportunities for researchers to go to sea, autonomous fleets offer an effective way to maintain a persistent presence in features of interest.

Oceanic microbes are essential players in the global climate system, producing roughly half of the world’s oxygen, removing carbon dioxide, and forming the base of the marine food web. Open-ocean eddies can be over 100 kilometers (62 miles) across and last for months. Phytoplankton (a kind of microscopic algae) thrive when these eddies spin counterclockwise in the Northern Hemisphere and bring nutrient-rich water from the depths up toward the surface. 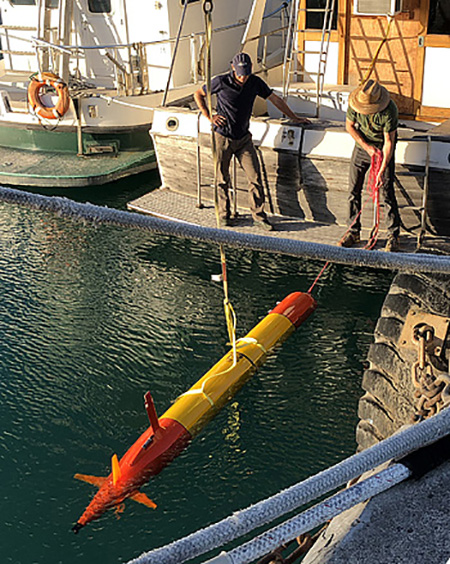 Many marine microbes live in a ubiquitous open-ocean feature called the deep chlorophyll maximum (DCM). In this ocean layer, light from above and nutrients from below converge to create an ideal environment for phytoplankton.

“The research challenge facing our interdisciplinary team of scientists and engineers was to figure out a way to enable a team of robots—communicating with us and each other—to track and sample the DCM,” said Brett Hobson, a senior mechanical engineer at MBARI and a coauthor of this study. Researchers have struggled to study the DCM because it can’t be tracked with remote sensing from satellites at depths of more than 100 meters (328 feet). Moreover, the DCM’s position can shift more than 30 meters (98 feet) vertically in just a few hours. This variability in time and space requires technology that can embed itself in and around the DCM and follow the microbial community as it drifts in the ocean currents.

The research team examined microbial ecology within a cyclonic (counterclockwise) eddy north of the Hawaiian Islands.

Ed DeLong and David Karl, oceanography professors in the UH Mānoa School of Ocean and Earth Science and Technology (SOEST) and co-authors of the study, have been researching these microbes for decades. DeLong noted that these teams of coordinated robotic vehicles offer a vital step toward autonomous and adaptive sampling of oceanographic features. “Open-ocean eddies can have a huge impact on microbes, but until now, we haven’t been able to observe them in this moving frame of reference,” he explained.

The first LRAUV (named Aku) acted as the primary sampling robot. It was programmed to locate, track, and sample the DCM. An onboard 3rd-Generation Environmental Sample Processor (3G ESP) filtered and preserved seawater samples, allowing researchers to capture a series of snapshots of the organisms’ genetic material and proteins. 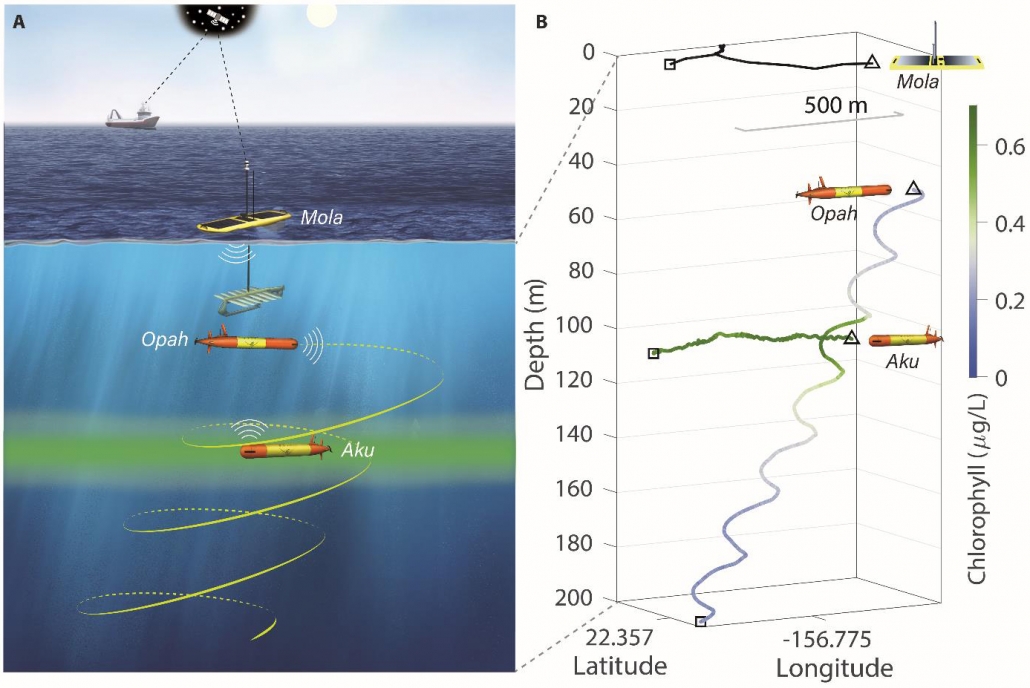 The second LRAUV (named Opah) acoustically tracked Aku and spiraled vertically around it to collect crucial information about the environment surrounding the DCM.

LRAUVs Aku and Opah carried a suite of sensors to measure temperature, salinity, depth, dissolved oxygen, chlorophyll concentrations, optical backscatter, and photosynthetically active radiation. Aku remained submerged for several days at a time, sampling the DCM, while Opah surfaced every few hours to relay information via satellite back to scientists on the ship. A Wave Glider surface robot (named Mola) also tracked Aku with sonar and communicated with the science team aboard the Falkor.

“This work is really the fulfillment of a decades-long vision,” said MBARI President and CEO Chris Scholin. Scholin has been engaged in this effort since he was an MBARI postdoctoral researcher seeking to develop autonomous sampling technology for marine systems. “Coordinating a robotic fleet to show how microbial communities react to changing conditions is a game-changer when it comes to oceanographic research.”

The primary sampling LRAUV Aku was able to accurately and consistently follow the DCM by tracking a constant temperature (called an isotherm, black line in the temperature panel on left) corresponding to the chlorophyll peak in the DCM (dark green in the right panel). Meanwhile, a secondary LRAUV (Opah) vertically profiled the surrounding water column. The black line shows the vertical position of the sampling LRAUV Aku at the target isotherm.

The researchers determined that Aku accurately and consistently tracked the DCM over the course of its multi-day sampling missions. By tracking the temperature corresponding to the peak of chlorophyll (an indicator of phytoplankton) in the DCM, the LRAUV maintained its position within the DCM even as this biological feature moved as much as 36 meters (118 feet) vertically in four hours.

“Building an LRAUV with an integrated ESP that could track this feature was a milestone. Combining that sampling power with the agility of three different robots autonomously working together over the course of the experiment is a significant engineering and operations achievement,” said Yanwu Zhang, a senior research engineer at MBARI and the lead author of this study.

Beyond the extraordinary engineering feat of organizing this robot ballet, the study also offers key takeaways related to how the biological community behaves inside a swirling eddy. RNA measurements reveal that as the eddy weakened into the second leg of the experiment, the phytoplankton biomass in the DCM decreased. “Much like our own team of researchers, each of the robots in the fleet is a specialist contributing to the experiment,” said John Ryan, a senior research specialist at MBARI and a coauthor of the study. “This adaptive approach gives us a new perspective on the environmental processes going on inside and around this plankton community.”

These robotic fleets are now also being used to monitor other key disturbances to ocean health like harmful algal blooms and oil spills. “Given the rapid changes our ocean is undergoing as a result of human activities such as climate change, pollution, and overfishing, this technology has the potential to transform our ability to understand and predict ocean health,” said Scholin.