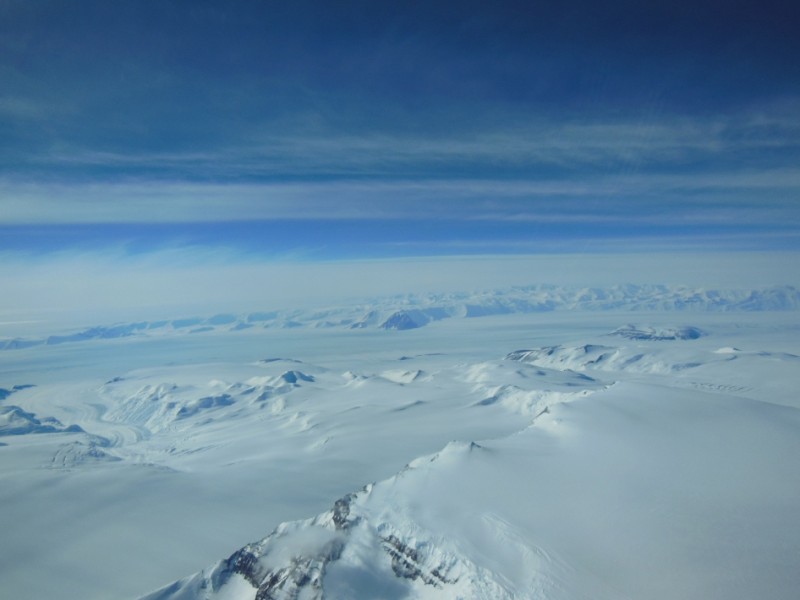 A newly-discovered source of oceanic bioavailable iron could have a major impact our understanding of marine food chains and global warming. A UK team has discovered that summer meltwaters from ice sheets are rich in iron, which will have important implications on phytoplankton growth. The findings are reported in the journal Nature Communications on 21st May, 2014*.

It is well known that bioavailable iron boosts phytoplankton growth in many of the Earth's oceans. In turn phytoplankton capture carbon – thus buffering the effects of global warming. The plankton also feed into the bottom of the oceanic food chain, thus providing a food source for marine animals.

The team, comprising researchers from the Universities of Bristol, Leeds, Edinburgh and the National Oceanography Centre, collected meltwater discharged from the 600 km2 Leverett Glacier** in Greenland over the summer of 2012, which was subsequently tested for bioavailable iron content. The researchers found that the water exiting from beneath the melting ice sheet contained significant quantities of previously-unconsidered bioavailable iron. This means that the polar oceans receive a seasonal iron boost as the glaciers melt.

"The Greenland and Antarctic Ice Sheets cover around 10% of global land surface. Iron exported in icebergs from these ice sheets have been recognised as a source of iron to the oceans for some time. Our finding that there is also significant iron discharged in runoff from large ice sheet catchments is new. "

"This means that relatively high iron concentrations are released from the ice sheet all summer, providing a continuous source of iron to the coastal ocean"

Iron is one of the most important biochemical elements, due to its impact on ocean productivity. Despite being the fourth most abundant element in the Earth's crust, it is mostly not biologically available because it is largely present as unreactive minerals in natural waters. Over the last 20 years there has been controversy over the role of iron in marine food chains and the global carbon cycle, with some groups experimenting with dumping iron into the sea in order to accelerate plankton growth – with the idea that increased plankton growth would capture man made CO2. This work indicates that ice sheets may already be carrying out this process every summer.

Based on their results the team estimates that the flux of bioavailable iron associated with glacial runoff is between 400,000 and 2,500,000 tonnes per year in Greenland and between 60,000 and 100,000 tonnes per year in Antarctica. Taking the combined average figures, this would equal the weight of around 125 Eiffel Towers, or around 3000 fully-laden Boeing 747s being added to the ocean each year.

"This is a substantial release of iron from the ice sheet, similar in size to that supplied to the oceans by atmospheric dust, another major iron source to the world's oceans.

At the moment it is just too early to estimate how much additional iron will be carried down from ice sheets into the sea. Of course, the iron release from ice sheet will be localised to the Polar Regions around the ice sheets, so the importance of glacial iron there will be significantly higher. Researchers have already noted that glacial meltwater run-off is associated with large phytoplankton blooms - this may help to explain why".

Commenting on the relevance of this study, Professor Andreas Kappler (geomicrobiologist at the University of Tübingen, Germany, who is also secretary of the European Association of Geiochemistry) said:

"This study shows that glacier meltwater can contain iron concentrations that are high enough to significantly stimulate biological productivity in oceans that otherwise are oftentimes limited in the element iron that is essential to most living organisms. Although the global importance of this flux of iron into oceans needs to be quantified and the bioavailability of the iron species found should be demonstrated experimentally in future studies, the present study provides a plausible path for nutrient supply to oceanic life."