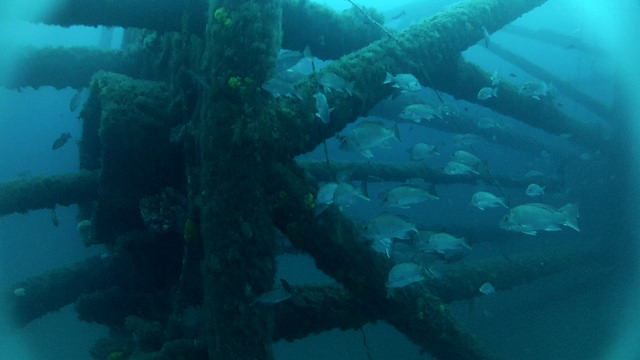 A groundbreaking new survey of Texas’ artificial reefs by the Center for Sportfish Science and Conservation (CSSC) at the Harte Research Institute (HRI) for Gulf of Mexico Studies has found a potential “sweet spot” where prized Red Snapper and other marine life flourish on these transformed oil platforms.

The study, published this month in the journal PLOS ONE, is the first to examine fish communities on the Gulf’s complex of artificial reefs on such a large scale. It’s part of a partnership with the Texas Department of Parks and Wildlife to study and monitor the state’s artificial reefs.

“Texas’ artificial reef program has been around for decades, but because the coast is so expansive and the reef material has been distributed so widely throughout, it’s been difficult to assess,” said Dr. Matt Ajemian, HRI Assistant Research Scientist and lead scientist on the project. “Because of the depth and scale of some of these reef sites, it’s difficult to conduct dive surveys. We developed new methods to survey these sites with remotely operated vehicles (ROV).”

Manmade structures in the northwestern Gulf of Mexico make up the largest complex of artificial reefs in the world. Due to oil and gas exploration, the Gulf of Mexico currently hosts as many as 3,000 oil and gas platforms. Beneath the surface, these platforms attract an abundance of marine life, from corals and sponges to schooling fish. Federal law requires platforms to be decommissioned and removed from waters at the end of their service, an expensive and cumbersome process that destroys these artificial oases of marine life. Since the 1990s, Texas has operated an Artificial Reef Program, converting decommissioned oil platforms, ships and other material into a flourishing network of artificial reefs that enhance recreational and commercial activities such as fishing and diving.

When platforms are “reefed” by the Texas Department of Parks and Wildlife, they are fully removed, towed to a reef site and laid on their side on the seafloor, or reefed in place to preserve current marine life, and the upper portion is removed and sunk nearby. This prevents the reefs from becoming a hazard for boaters. But some have questioned whether converting these rigs disturbed already productive habitats.

CSSC scientists wanted to find out if changing the orientation of these platforms also changed the marine communities they hosted. They found that because these reefs were farther from the water’s surface, the types of species populating reefed rigs did change, but the abundance and diversity of life that draws fishermen and divers did not. In addition, popular sportfish were still attracted to submerged platforms.

“When you convert an upright rig to a reef it affects the type of fish that are out there, but the overall number of species is preserved,” Ajemian said. “Most importantly, we found that reefing these rigs doesn’t seem to affect the numbers of commercially and recreationally important species like Red Snapper and Amberjack.”

In a second survey, the researchers dropped vertical lines to assess Red Snapper populations on Texas’ artificial reefs. This species supports one of the most valuable commercial and recreational fisheries in the Gulf. Red Snapper have remained overfished in recent decades, leading to drastic reductions in both season and bag limits for recreational anglers. The federal season begins June 1.

Researchers uncovered the best artificial habitat for this sought-after species. Measuring the abundance and size of Red Snapper, researchers made an interesting discovery: There appears to be a bottom depth, about 150-200 feet below the surface, that hosts the largest and most abundant Red Snapper and some of the greatest species diversity on the reef.

“We’re recommending that managers of artificial reef programs focus on this depth if Red Snapper enhancement is the goal,” Ajemian said. “It seems to be a sweet spot. We see larger, mature Red Snapper that can contribute to the population by producing more young. But we also see elevated species richness, indicating an area where divers can see a greater diversity of marine life.”

“This is the first of many studies underway to develop the best practices when creating reefs,” said Dr. Greg Stunz, Director of the CSSC, HRI Endowed Chair for Fisheries and Ocean Health and a co-author on the study. “We are very pleased with Dr. Ajemian and his team for providing answers to key scientific management gaps that will lead to better management of Gulf fisheries.”

Ongoing projects will compare marine life on Gulf of Mexico artificial and natural reefs, and examine whether these artificial reefs merely attract species or instead create habitat that results in increase fish population.

“We really can’t evaluate what all of these trends mean until we make comparisons with natural habitats,” said Jennifer Wetz, coordinator of CSSC’s offshore program. “There is a need for additional information, and this is a crucial next step in our program.”

This study was funded by the Texas Parks and Wildlife Department’s Artificial Reef Program. Initial ROV support and operation was provided by the crew of the Schmidt Ocean Institute aboard the R/V Falkor. The Center for Sportfish Science and Conservation, Harte Research Institute, and Texas A&M University-Corpus Christi provided additional logistical and field assistance.

About Texas A&M University-Corpus Christi: Offering more than 80 of the most popular degree programs in the state, Texas A&M-Corpus Christi has proudly provided a solid academic reputation, renowned faculty, and highly-rated degree programs since 1947. The Island University has earned its spot as a premier doctoral-granting institution, supporting a UAS test site, two institutes, and 13 research centers and labs. Discover your island at http://www.tamucc.edu/.