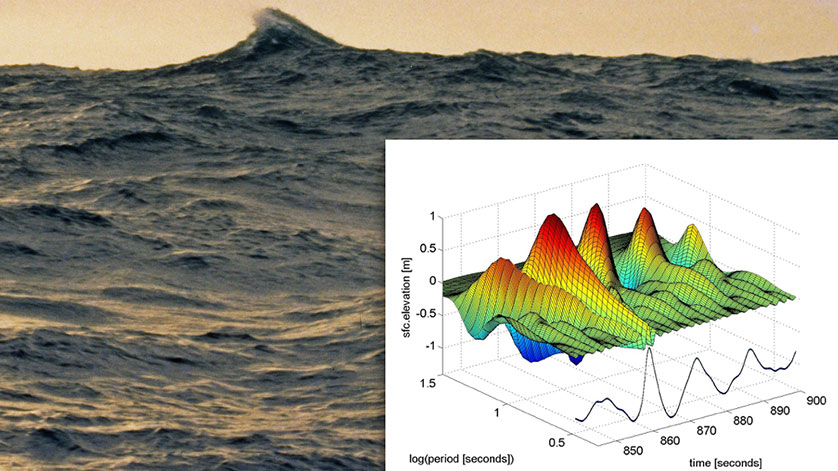 University of Miami Rosenstiel School of Marine and Atmospheric Science scientist Mark Donelan and his Norwegian Meteorological Institute colleague captured new information about extreme waves, as one of the steepest ever recorded passed by the North Sea Ekofisk platforms in the early morning hours of Nov. 9 2007.

Within the first hour of the day, the Andrea wave passed by a four-point square array of ocean sensors designed by the researchers to measure the wavelength, direction, amplitude and frequency of waves at the ocean surface.

Using the information from the wave set—a total of 13,535 individual waves—collected by the system installed on a bridge between two offshore platforms, the researchers took the wave apart to examine how the components came together to produce such a steep wave.

The data from the 100-meter wide “wall of water” moving at 40 miles per hour showed that Andrea may have reached heights greater than the recorded height of 49 feet above mean sea level. They also found that rogue waves are not rare as previously thought and occur roughly twice daily at any given location in a storm. The findings showed that the steeper the waves are, the less frequent their occurrence, which is about every three weeks at any location for the steepest rogues.

“Rogue waves are known to have caused loss of life as well as damage to ships and offshore structures,” said Mark Donelan, professor emeritus of ocean sciences at the UM Rosenstiel School. “Our results, while representing the worst-case rogue wave forecast, are new knowledge important for the design and safe operations for ships and platforms at sea.”

The study, titled “The Making of the Andrea Wave and other Rogues,” was published in the March 8 issue of the journal Scientific Reports. The authors include: Donelan and Anne-Karin Magnusson from the Norwegian Meteorological Institute. The work was partly performed within the ExWaMar project (ID 256466/O80) funded by the Norwegian Research Council. ConocoPhillips provided the wave data.