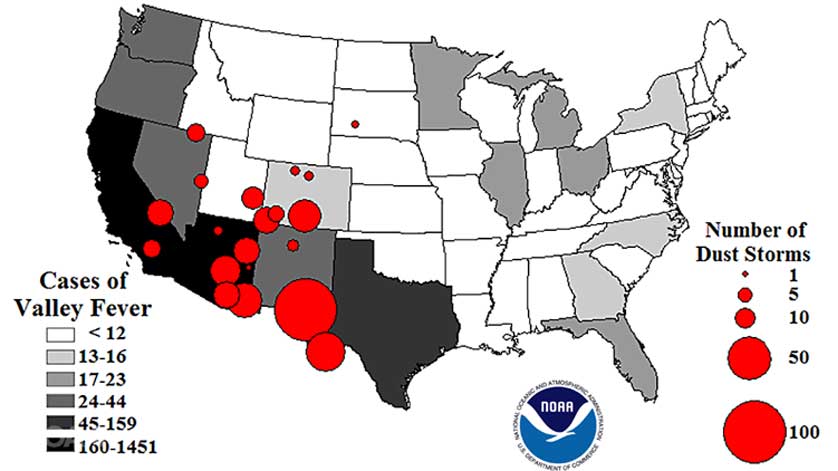 People living in the American Southwest have experienced a dramatic increase in windblown dust storms in the last two decades, likely driven by large-scale changes in sea surface temperature in the Pacific Ocean drying the region’s soil, according to new NOAA-led research.

With the increase in dust storms, scientists have also documented a spike in Valley fever, an infectious disease caught by inhaling a soil-dwelling fungus found primarily in the Southwest.

“We’ve known for some time that the Southwest U.S. is becoming drier,” said lead author Daniel Tong, a scientist at NOAA’s Air Resources Laboratory and George Mason University. “Dust storms in the region have more than doubled between the 1990s and the 2000s. And we see that Valley fever is increasing in the same region.”

The new research appearing in the journal Geophysical Research Letters, shows that the average of 20 dust storms per year in the 1990s jumped to 48 per year in the 2000s in the Southwest.

Scientists look to ocean for answers

“When we saw this dramatic increase in dust storms and the drying of soils, we started looking to the ocean for answers,” said Julian Wang, a NOAA climate scientist and co-author. “Changes in the ocean occur over longer periods of times than we typically see in the atmosphere.”

Researchers found there was a combination of warmer sea surface temperatures in the North Pacific during the 2000s than during the 1990s, along with colder waters off the California coast. This allowed for cooler and drier northerly winds from the North Pacific into the southwestern U.S., helping to dry the soil.

The wind pattern also blocked warmer, moister winds from the tropical Pacific. This contributed to increased dust storms in every season except summer, when plant cover and soil moisture increases. The new research is the first to be based on a long-term data record NOAA is developing to track the history of dust storms in the United States.

“Over time, analyzing the data will help us better predict dust storm patterns and answer the question of whether increased dust storms are a natural variation or could precipitate a larger shift in the area to desert,” said Tong.

Better prediction of dust storms can help the agriculture, aviation and transportation industries, as well as healthcare. Dust storms not only carry the fungus that can cause Valley fever, but also can severely damage aircraft engines, disrupt land transportation and erode and damage farms already hit by drought.