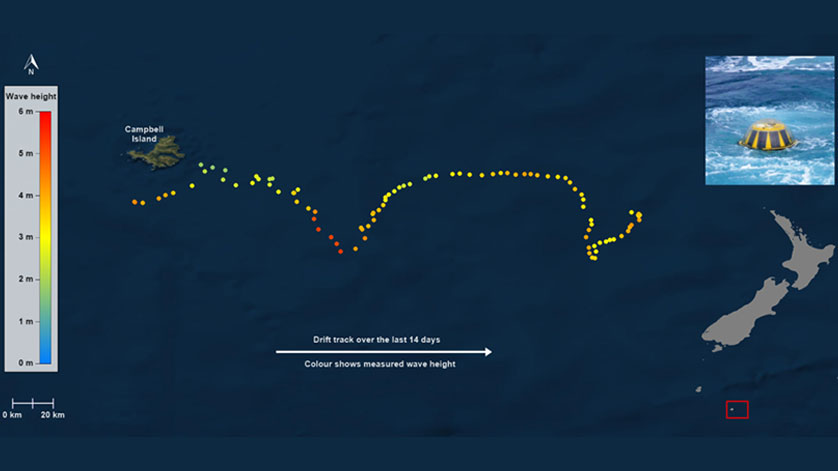 "We're not exactly sure what happened," advises oceanographer Dr. Peter McComb. "However, it’s likely the compliant bungy section of the mooring failed under the extreme wave conditions down there. Since February 2017, the maximum wave heights have exceeded 10 m for 26% of the time, and there are very few places on our planet that energetic. At the start of the project there were many uncertainties. Would there be enough solar power to keep it alive during the deep south winter? Would the mooring survive the constant stresses and ride out the ferocious storms? Ultimately, we are very pleased to have succeeded in our goal of making almost 6 months of very detailed spectral measurements at this location in the sub-Antarctic.”

The HMNZS OTAGO deployed the buoy in February 2017 for a collaborative research project between the Defence Technology Agency and MetOcean Solutions. From the chilly waters just south of Campbell Island, the buoy has been sending back vital wave spectral data via a satellite link. These data will now be used by the New Zealand Defence Force to design the next class of patrol ships suited to the harsh Southern Ocean climate. MetOcean Solutions have a research project to develop a global wave model with improved performance in the Southern Hemisphere, and will use the data to verify the next generation of model physics. The wave data will also be made freely available to the international research community. The Southern Ocean is known to play an important role in the climate system - cycling heat, carbon, and nutrients. Waves modulate the air-sea fluxes and the swells generated in this region have far-reaching effects, contributing significantly to the wave climate in all the major ocean basins. 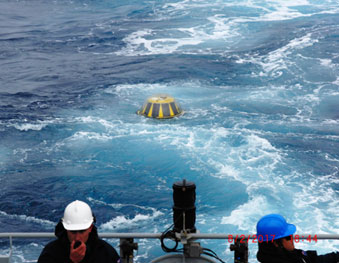 The buoy was deployed in February 2017.

Another positive outcome is the realization that our research project is not over yet - the buoy continues to measure wave spectra and send its data via the satellite link as long as there is sufficient solar power.

“Now we have a new and unique opportunity to make ongoing Southern Ocean wave measurements at the very extremity of the planets’ largest ocean – the Pacific. It’s highly valuable data for oceanographers," says Peter. “Conceivably, it might take over a year to reach Chile, which would make a fantastic and very significant dataset. Let’s hope there is enough sunlight to keep powering the system during this journey.”

MetOcean Solutions plans to deploy another wave buoy at the Campbell Island site in February 2018, with the goal of establishing a long term sub-Antarctic wave monitoring station.

“The international ocean research community recognizes the value of detailed wave spectra collected at this remote location,” notes Peter, “and Campbell Island is the perfect site to make baseline measurements for climate change studies as well improving our fundamental understanding of wave physics at a planetary scale. New Zealand can make a very practical contribution to global oceanography by making high quality, real-time measurements from this site. As a nation, we are very fortunate to have some Deep South real estate with a great harbor. It’s got a lot of potential for meaningful, long term research.”