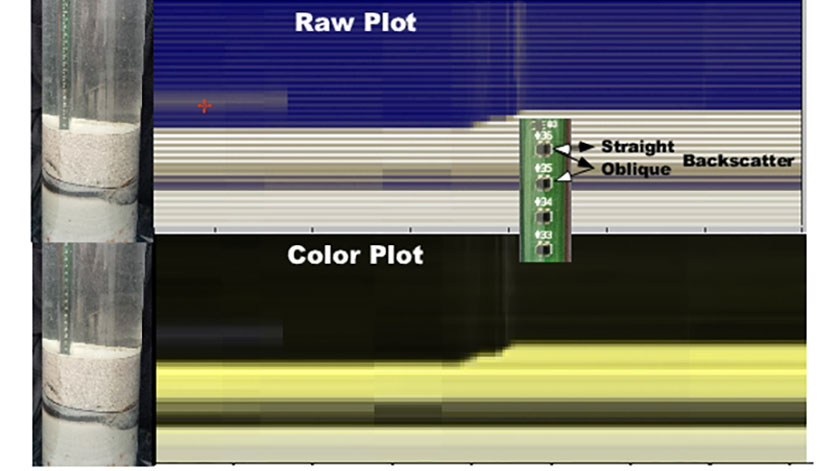 A brief vibration at regular intervals will shed loose debris from the sensor, which is a vertical plastic tube 15 mm in diameter. The low mass of the SediMeter is what makes this possible, since a metal instrument would dampen the vibrations a lot more.

Another major improvement is in the sensor’s resolution. It now measures not just straight, but oblique backscatter as well, thus doubling the scan resolution from 10 mm to 5 mm. The bottom level is reported with 0.01 mm resolution just as before, since that is an interpolated value not directly related to the scan resolution.

The straight and oblique methods of measuring turbidity are similar but not identical. The measured values are the same in water, but differ when the sensor is buried or exposed to air. This is a big advantage since it improves the ability to discern different materials. By displaying the straight backscatter in yellow and the oblique backscatter in blue, a color image results in which sediments are brown or beige, water is black or gray depending on turbidity, and air is blue. Instead of a B/W image with 10 mm resolution, we get a color image with 5 mm resolution. To improve the image quality the signal processing has also been optimized, including improved temperature compensation and sampling with 16 bits resolution instead of 14 bits.