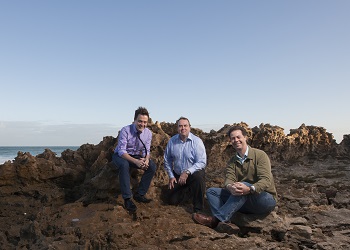 Researchers from The University of Western Australia are aiming to prevent calcium scale in oil and gas pipelines through the innovative use of an environmentally friendly seaweed extract.

Dr. Zachary Aman, Dr. Brendan Graham and Professor Eric May who are investigating the use of a seaweed extract to reduce the use of chemicals in gas and oil pipelines

“Scale formation in oil and gas pipelines has always been a liability for the oil and gas industry as it reduces production rates. In some cases scale formation can result in a loss of production of over $1,000,000 per day from a single affected well,” Dr. Graham said.

“Traditionally, dissolving calcium from gas producing pipelines involves pumping chemicals into pipes to remove the scale and then another batch of chemicals to prevent further scale formation.

“The innovative use of a natural product from the ocean would markedly reduce any harmful impact on the environment. Its use would represent a natural cycle of resources: the product comes from the ocean and could enable oil and gas companies to employ environmentally friendly production techniques.”

Using their diverse knowledge of chemistry and chemical engineering, the researchers tested alginate in various field scenarios and found not all types of seaweed alginate effectively prevent calcium from forming on the pipe walls.

They discovered the most effective type of alginate comes from brown seaweed and lends itself to an impressive return on investment as it is recyclable, renewable and potentially a far superior solution to the current methods of preventing scale formation in pipelines.

“Alginates are currently used in a number of industries such as the medical and food industries, to control the release of calcium from watery solutions through the formation of water insoluble gels,” Dr. Aman said.

“So far there’s been no information available to describe the effectiveness of alginates in the oil and gas industry. By using alginate in pipelines, we can control and prevent scale formation without disrupting the protective iron carbonate layer in flowlines,” he said.

The next stage of the technology development includes a detailed qualification plan for the development of this new approach to scale prevention, allowing for continued investigation of the applications of alginate across the industry, and eventually for deployment in the field.

“It’s extremely exciting to work on industry-funded research that so far has gone precisely to plan and aligns exactly with our expertise,” Professor May said.