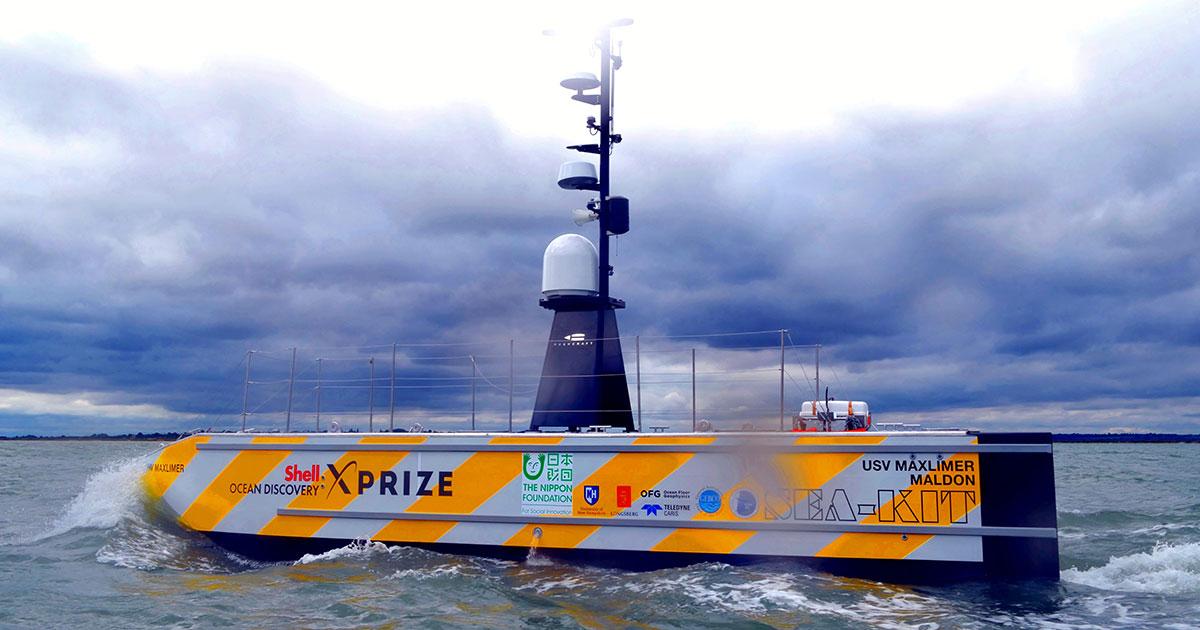 SEA-KIT, a 12m-long unmanned surface vessel (USV) designed and built in Essex, UK, docked in the Belgian port city of Oostende earlier this week following a successful transit from West Mersea. The voyage, which lasted 22 hours, represents the first commercial crossing of the North Sea by an autonomous vessel, and marks a significant breakthrough in unmanned ocean transit.

The SEA-KIT USV arrived at Oostende at 09:00 CEST on Tuesday, May 7, where it was welcomed by Belgian customs officers, who took delivery of a box of oysters caught around Mersea Island that SEA-KIT had delivered from its West Mersea point of departure. The box weighed around 5 kg – just a fraction of the current model’s maximum payload of up to 2.5 tonnes. 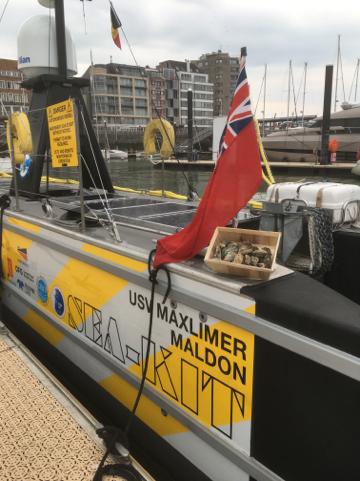 The box of Mersea-caught oysters delivered by SEA-KIT, seen here on the vessel docked in the Belgian port city of Oostende. Credit: SEA-KIT International Ltd

The SEA-KIT vessel USV Maxlimer is operated by SEA-KIT International Ltd, and is designed and developed by Hushcraft Ltd, based in Tollesbury, Essex. SEA-KIT’s unique modular design means that it can be easily and cost effectively configured to a wide range of maritime tasks for various sectors. The vessel can be transported in a single 40ft container, drastically reducing the mobilization costs, and being truly unmanned means SEA-KIT can conduct its missions without placing any human personnel in harm’s way and at significantly reduced rate.

The mission was designed to showcase SEA-KIT’s unmanned navigation capabilities through GPS and satellite communication, including marine traffic avoidance in what is one of the world’s busiest shipping routes.

With the successful completion of the UK-to-Belgium mission, SEA-KIT’s voyage demonstrates an effective model for international communication and cooperation in the field of unmanned shipping. The Global Situational Awareness via Internet (G-SAVI) communications and control system allows an operator to remotely access CCTV footage, thermal imaging and radar through SEA-KIT, as well as listen live to the vessel’s surroundings and communicate with others in the vicinity.

“This voyage has been months in the making, and to see it all come together today is amazing”, said Ben Simpson of SEA-KIT International Ltd. “It demonstrates not only the capacity of SEA-KIT and the robustness of the design, but the value and effectiveness of the cloud-based communications technologies involved in unmanned transit.”

“SEA-KIT is a fundamentally versatile model. Its potential lies in its ability to be adapted to a range of tasks, whether it be transit, hydrographic surveys, environmental missions, or marine safety and security. We’re tremendously excited to push the technology to its limits and see what we can achieve.”

The UK-to-Belgium transit was made possible with the support of the UK Maritime and Coastguard Agency, the UK Department for Transport, the UK Foreign and Commonwealth Office, partners in Belgium, and the European Space Agency. With this voyage completed, the team behind the mission will now set their sights on higher goals to test the capabilities of the vessel.

SEA-KIT was developed for, and used with, the Kongsberg Maritime Hugin AUV System for the GEBCO-Nippon Foundation Alumni Team entry to the Shell Ocean Discovery XPRIZE, a global competition challenging teams to advance deep-sea technologies for autonomous, fast, high-resolution ocean exploration. The GEBCO-NF team was funded by The Nippon Foundation of Japan, a private, non-profit foundation.

The team’s concept for efficient, safe and cost-effective seafloor mapping utilized the purpose-built Kongsberg Maritime Hugin AUV System, rated to operate at depths of up to 4,500 meters, supported by SEA-KIT, which has the ability to autonomously launch and recover the AUV and acts as a communication link during subsea survey operations.

The GEBCO-NF Alumni Team includes 16 alumni of The Nippon Foundation-GEBCO Postgraduate Training Program at the University of New Hampshire, US, and hail from Russia, Egypt, South Africa, the USA, Mauritius, Peru, Ireland, Japan, the Philippines, Malaysia, Israel, Poland and Brazil.

The team made it through to the final round and is currently in the running for the top prize of $5m. The winner of the Shell Ocean Discovery XPRIZE will be announced at an awards ceremony in Monaco later this month.