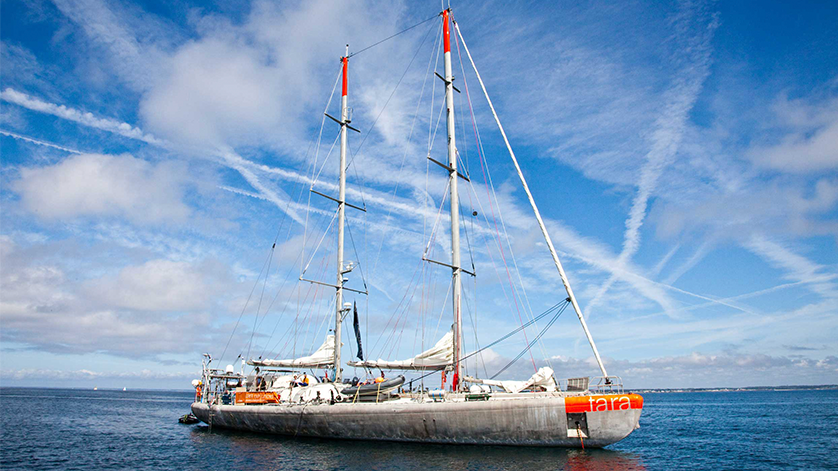 The world's oceans teem with scientific mystery, unknowns that could prove to be tools that will one day protect the planet from global warming.

An international research team now reports they've tripled the known types of viruses living in waters around the globe and have a better idea what role they play in nature. Led by Ohio State University scientists, the team includes University of Michigan biologist Melissa Duhaime. 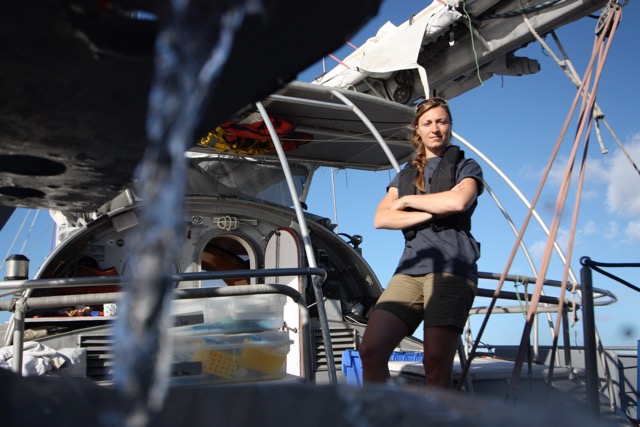 University of Michigan biologist Melissa Duhaime aboard the schooner Tara in 2011 during a voyage to collect ocean viruses. Image credit: Anna Deniaud

Their findings were published online Sept. 21 in the journal Nature. Team members said their work will likely have far-reaching implications, including ultimately helping to preserve the environment through reducing excess carbon humans put into the atmosphere.

The oceans currently soak up half of that carbon, but that comes at the cost of acidifying the oceans, which puts some ocean-dwellers, including shellfish, at risk. Understanding how microbes and viruses interact is critical to any possible management efforts, the researchers said.

Their work was possible because of the unprecedented three-year Tara Oceans Expedition, in which a team of more than 200 experts took to the sea to better understand its unseen inhabitants, and the Spanish-led 2010 Malaspina expedition, which evaluated the impact of global change on the ocean and studied its biodiversity.

Roux is a postdoctoral researcher in the lab of Matthew Sullivan, the study's senior author and an associate professor of microbiology at Ohio State.

"Ten years ago I would never have dreamed that we could establish such an extensive catalog of ocean organisms around the world," Sullivan said. "Scientists around the world are revealing how microbes impact our bodies, soil, the air and the oceans. As we improve our ability to study viruses, we're seeing the role viruses play in these microbial functions."

U-M's Duhaime participated in the Tara Oceans Expedition in 2011 and helped sample ocean viruses as the vessel sailed the South Pacific on a leg from continental Chile to Easter Island. She spent weeks filtering microbes and viruses out of thousands of liters of seawater. The microorganisms were brought back to the lab for genetic studies.

"These findings have implications far beyond ocean viral diversity and will help us better understand microbial diversity on a global scale," said Duhaime, an assistant research scientist in the U-M Department of Ecology and Evolutionary Biology.

"Before we can understand how organisms interact and the consequences of those interactions—which have implications for both planetary and human health—we need to have a handle on who is there, how they are organized into groups of similar-looking and similar-behaving organisms, and how these groups are distributed across time and space."

In addition to analyzing viruses in the oceans, Duhaime's lab studies the impacts of Great Lakes microbes, from the viruses that infect Lake Erie's harmful bloom-forming algae to the sources of Great Lakes plastics and the microbes that make a home on that debris.

"The magnitude of what the Tara Oceans Expedition contributed to the microbial realm is akin to the historic biodiversity-discovery expeditions of macroorganisms by the likes of Alfred Russel Wallace and Charles Darwin," Duhaime said.

Ohio State's Roux said microbes in the oceans make half of the oxygen humans breathe, making viruses that infect these microbes particularly important.

"Our work not only provides a relatively complete catalog of surface ocean viruses, but also reveals new ways that viruses modulate greenhouse gases and energy in the oceans," he said.

At any given time, about one in three cells in the ocean is infected with a virus, altering the way the cell behaves, Roux said. The Ohio State team is eager to see how viruses might fit into future efforts to reduce carbon in the atmosphere.

Greenhouse gases threatening the environment could be mediated by these viruses through manipulation by scientists—something that is at least a couple decades off, but will likely be necessary to manage climate change, Sullivan said.

"The ocean is a major buffer against climate change. Our suspicion is that people will leverage this buffer to their benefit," he said. "They could find ways to fine-tune viruses so that they sink carbon into the deep ocean." Prior to this work, viruses were identified here and there around the world, he said. That previous list—most recently outlined in prior work by the Sullivan Lab—was used for comparison in this study. Now, Roux and Sullivan think they have a much more complete picture of what's happening on a viral level in the world's marine waters.

U-M's Duhaime was a postdoctoral researcher in the Sullivan Lab before moving to Ann Arbor. She helped develop new methods that made it possible to generate the genomic datasets reported in the Nature paper.

Ohio State's work was supported by the National Science Foundation and the Gordon and Betty Moore Foundation.