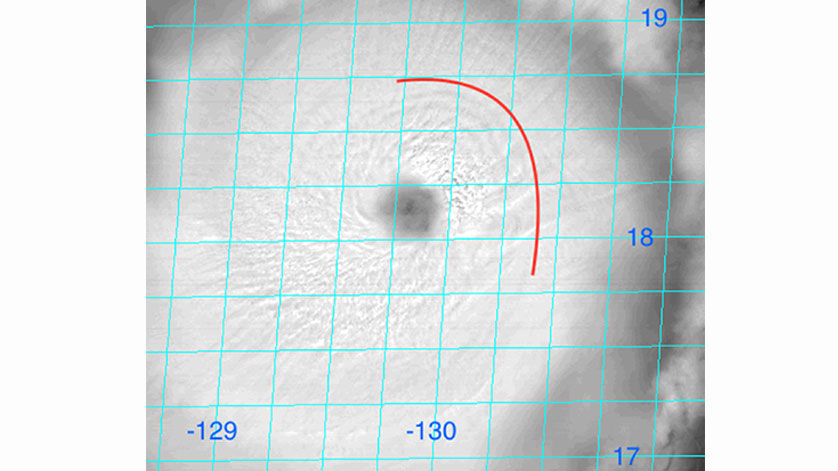 Researchers believe they have found a new way to monitor the intensity and location of hurricanes from hundreds of miles away by detecting atmospheric waves radiating from the centers of these powerful storms.

In a new study, scientists from the University of Miami (UM) Rosenstiel School of Marine and Atmospheric Science and the Hurricane Research Division of the National Oceanic and Atmospheric Administration (NOAA) presented direct observations of the waves, obtained by NOAA aircraft flying in hurricanes and by a research buoy located in the Pacific Ocean. The waves, known as atmospheric gravity waves, are produced by strong thunderstorms near the eye and radiate outward in expanding spirals.

“These very subtle waves can sometimes be seen in satellite images,” said David Nolan, professor in the Department of Atmospheric Sciences, and lead author of the study. “We were able to measure them in aircraft data and surface instruments.”

In addition, says Nolan, computer simulations performed at the UM Center for Computational Science can reproduce the waves, showing that the wave strengths can be related to the maximum wind speed in the core of the storm. These findings suggest that hurricanes and typhoons could be monitored from hundreds of miles away with relatively inexpensive instruments, such as barometers and anemometers, much like earthquakes from around the world are monitored by seismometers.

The researchers analyzed data obtained from 25 different penetrations by NOAA P3 aircraft into five hurricanes in 2003 and 2004, as well as data from the Extreme Air-Sea Interaction (EASI) buoy deployed in the Pacific Ocean by UM Rosenstiel School scientists in 2010. “The waves cause very weak upward and downward motions, which are recorded by the NOAA P3 as it flies through the storm,” said Jun Zhang of the Hurricane Research Division, a veteran of many hurricane flights. “But we were surprised at how clearly the waves could be detected at the surface.”

“Of course, hurricanes are very well observed by satellites. But these waves can reveal processes occurring in the eyewall of a hurricane that are obscured from the view of satellites by thick clouds,” said Nolan. “Any additional measurements, even if they provide similar information as satellites, can lead to better forecasts.”