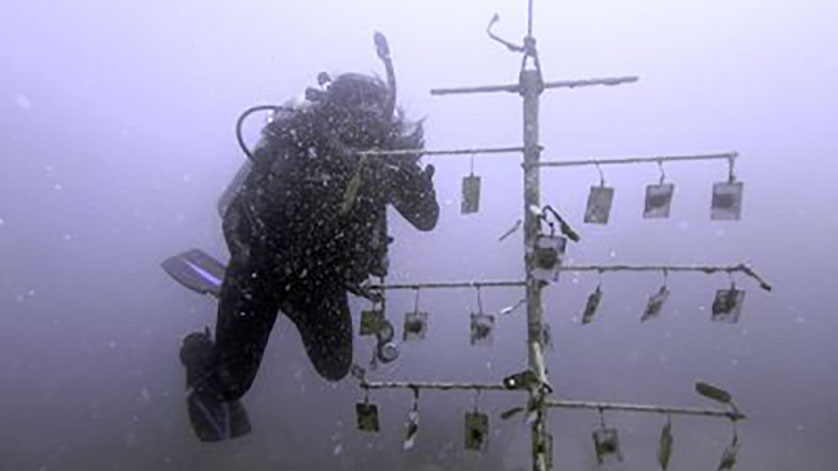 Nestled in the Florida Keys Marine Sanctuary, 10 tree-like structures made of PVC pipes rise up from the ocean floor. They are adorned with plastic cards that hang from fiberglass branches. The cards house growing pieces of endangered coral. An odd sight to see, this group of makeshift trees could help solve one of the greatest environmental problems facing the world’s oceans today — the loss of coral reefs.

The structures are divided into two groups not far from FIU’s Aquarius Reef Base. Scientists call them nurseries, a place where they grow new corals. One resides at 90 feet below the ocean surface, the deepest coral nursery in the world.

“People haven’t tried to grow coral reef nurseries at these depths before, so there are new questions we’ll be able to address with science,” said Anthony Bellantuono, a post-doctoral research associate in the College of Arts, Sciences & Education.

The world’s coral reefs are threatened by fishing, pollution, global warming and even sunscreen. Because these disturbances affect shallow reefs more than deep reefs, marine scientist Mauricio Rodriguez-Lanetty is studying whether corals in deep waters can be used to repopulate imperiled reefs in shallow waters. He and the members of his lab have partnered with the Coral Restoration Foundation to create the nurseries.

When it came to the actual labor of “planting” the trees, the team sought the help of astronauts. Establishing a nursery at those depths would be difficult to accomplish on routine dives because of time limits designed to avoid decompression sickness. But because of FIU’s Medina Aquarius Program, which houses the world’s only underwater research laboratory, people can live and work underwater for days and weeks at a time.

“Saturation diving allows us to conduct research that can’t be done anywhere else in the world,” Rodriguez-Lannetty said. “We wouldn’t be able to study deep coral reefs without the support of Aquarius. It would be impossible.”

When astronauts from NASA, the European Space Agency and the Japan Aerospace Exploration Agency descended on Aquarius for a training mission in 2015, they took the trees with them. The scientific project was a perfect exercise for the astronauts to test communications equipment in an isolated and extreme environment. They deployed the trees, under the direction of Ken Nedimyer from the Coral Restoration Foundation, and named the nurseries Mercury and Atlas.

In subsequent training missions during the past two years, NASA astronauts continued to work on the nurseries and students and researchers from Rodriguez-Lanetty’s lab, including Dan Merselis, Katherine Dougan and Thinesh Thangudarai, make regular visits to monitor the progress, test new theories and maintain the health of the growing corals.

According to the National Oceanic and Atmospheric Administration, coral reefs provide economic services, including jobs, food and tourism estimated to be worth $375 billion each year. They also help protect coastal communities against erosion and flooding. Yet, 20 percent of the world’s coral reefs have been effectively destroyed and show no immediate prospects of recovery according to the World Wildlife Fund.

The research being conducted at Aquarius could be a first step in finding solutions to one of the oceans’ greatest environmental threats.

JoAnn Adkins contributed to this story.