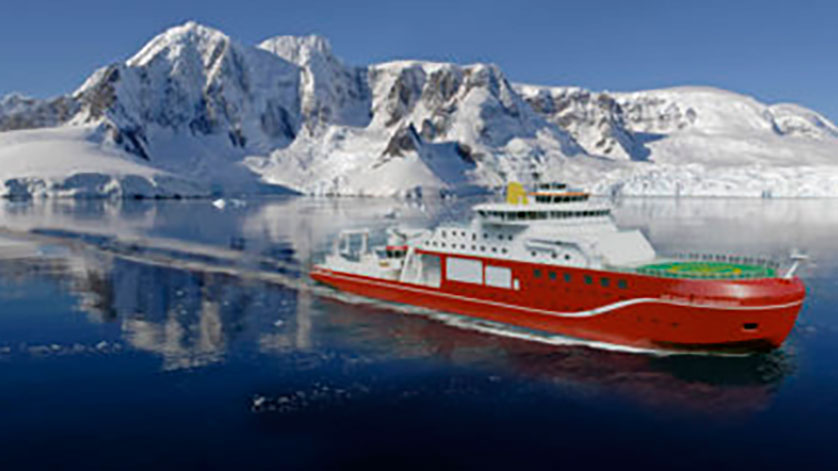 Pinpoint Electronics of Devon, UK is the local FarSounder representative for this prestigious project. Pinpoint’s Managing Director, Sally Dale stated, “As a former officer in the Royal Navy, a ship’s safety has always been of the utmost importance. Over my years in the industry, I have learned the best way to achieve the highest level of safety is by adding a FarSounder sonar to the navigation suite.”

With the new ship’s ability to embark on longer voyages and explore some of the most remote aquatic regions of the world, the FarSounder sonar will prove invaluable in its primary use for navigation and obstacle avoidance. In addition, it’s technology and data can supplement the more traditional on-board science mission sensors. The new ship’s vast capabilities will enable scientists to explore and undertake science in new areas of the Antarctic and Arctic seas. The enhanced coverage achieved by utilizing FarSounder-1000 can open up new locations for science and will clearly demonstrate and reinforce continuing British presence in Antarctica and the South Atlantic.

The sonar will be protected during ice breaking operations via a custom hoist designed and built by C4R Maritime Solutions of Frederikssund, Denmark, and tested in the lab at Force Maritime in Denmark. “Having this new solution for specialized vessels, a new world opens up to many more vessels that can benefit from the innovative technology of FarSounder.” said Bill Endersen, senior engineer at C4R.

Last year, FarSounder was integral in the residential ship The World's groundbreaking excursion that reached the Ross Ice Shelf, the furthest south any vessel has ever sailed. It will be fascinating to see where RRS Sir David Attenborough will be able to explore with a FarSounder leading the way.

British Antarctic Survey (BAS), an institute of the Natural Environment Research Council (NERC), delivers and enables world-leading interdisciplinary research in the Polar Regions. Its skilled science and support staff based in Cambridge, Antarctica and the Arctic, work together to deliver research that uses the Polar Regions to advance our understanding of Earth and our impact on it. Through its extensive logistic capability and know-how BAS facilitates access for the British and international science community to the UK polar research operation. Numerous national and international collaborations, combined with an excellent infrastructure, help sustain a world-leading position for the UK in Antarctic affairs. The UK is one of over thirty countries operating scientific research facilities in Antarctica.