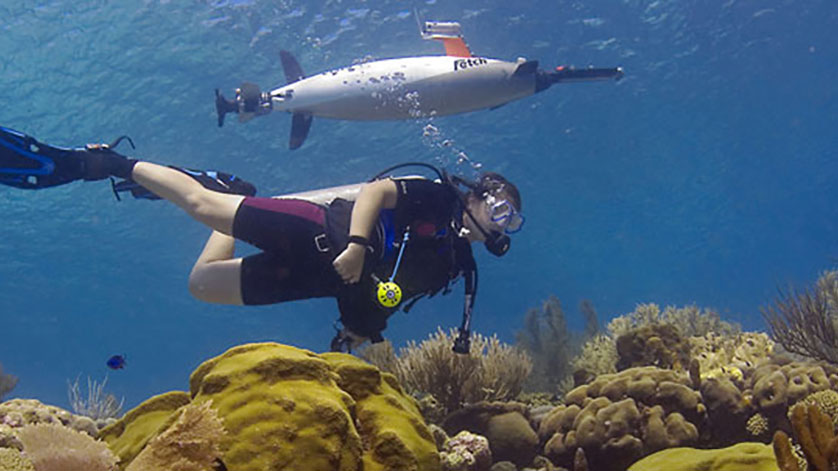 A study authored by University of Delaware professor Art Trembanis and colleagues reveals new details about deep sea reefs — known as mesophotic reefs — near the island of Bonaire in the Dutch Caribbean.

While coral reefs worldwide are in decline, the waters surrounding Bonaire comprise a marine park known as a scuba “diver’s paradise” because it contains some of the most well-preserved coral reefs in the Caribbean basin.

Trembanis and colleagues used autonomous underwater vehicles (AUVs) to map these deep sea reefs, situated 100 to over 500 feet (30 to over 150 meters) below the ocean surface, which are considered a lifeline for shallow reef recovery due to stressors like warming (bleaching), ocean acidification, over fishing and other deteriorations.

These deep reefs can be a substantive part of the coral reef ecosystem of any island, yet they remain largely unexplored because they generally are located beyond the capabilities of divers and are too expansive to be studied using submersibles.

The researchers hope the mapping effort, and the associated data, will help local conservation efforts.

“It’s hard to manage what you don’t see,” said Trembanis, an associate professor in the College of Earth, Ocean, and Environment’s School of Marine Science and Policy.

The multinational team field project was part of a major National Oceanic and Atmospheric Administration (NOAA) Ocean Exploration campaign. More than 20 scientists and engineers from across two continents and half a dozen countries participated in the project, including UD undergraduate students on study abroad.

The researchers first focused on identifying where these mesophotic reefs were located, then analyzed the data collected to characterize the depth, slope and surface roughness of the sea floor, creating an index of specific bottom types associated with these deeper reefs.

“So you might be able to see, hey, the slope is low but there is a big bump there, giving you the physical properties of the area. Then the backscatter from the sonar might tell you something about the nature of the seabed, like whether it is sandy or comprised of hard coral,” explained Trembanis.

These tools also allow the researchers to classify ecologically important reefs that might be worthy of further investigation.

According to Trembanis, some of the reefs that were mapped may have originated when mean sea levels were lower. As sea levels have risen, Trembanis theorizes that these underwater communities have evolved to include only deeper water tolerant species, providing a refuge in spawning or settling sites not just for the corals, but also for fish.

“If we want to try to study refugia connections between shallow and deep reefs, first we want to know where the deep reefs are located,” he said.

For example, if there are shallow water species in a deep water setting that was disturbed, it might suggest that these species didn’t grow in situ but may have been transported there, perhaps by a significant wave event.

“We know that places in Bonaire and the Caribbean are routinely hit by hurricanes and subject to tsunami events from volcanic collapses or eruptions within the basin. We know through other work that the signature of a storm can be seen on the seafloor offshore,” he said. “The details of these maps allow us to look for anomalies on the seabed.”

Two sites showed evidence of reef-like structures at depths greater than 550 feet (approximately 168 meters) with no other associated shallow water reefs nearby, suggesting a submerged reef, rather than a reef created from a collapsed fragment from the shallow water reef above.

In another location, a large pile of coral rubble discovered at 550 feet was deposited in such a way that suggests the coral originated in shallower waters, which may indicate that a significant wave event (either storm or tsunami) had an impact on the area.

Over 50 percent of the observed reef structures in the study were found outside the marine protected area (MPA), raising important questions on whether an extension of the MPA should be considered to safeguard important sources of shallow coral larvae and photosynthetic algae called zooxanthellae.

One interesting piece of information to emerge from the data was the discovery of several slump features likely related either to tsunami events or major hurricanes. According to Trembanis, the data could aid in hazard risk management throughout the Caribbean.

“Neighboring islands of Aruba, Curacao and throughout the Dutch West Indies/Caribbean share a common approach to marine management and it’s likely that the distributions we are seeing in Bonaire are present in these other islands. This opens the door to future projects to create baseline maps of where deep reefs are located and in what condition,” he said.

The study, published in the open-source journal Frontiers in Marine Science, was supported by a NOAA Office of Ocean Exploration and Research Award #NA07OAR4600291.

Article by: Karen B. Roberts / Video by: Jeff Chase