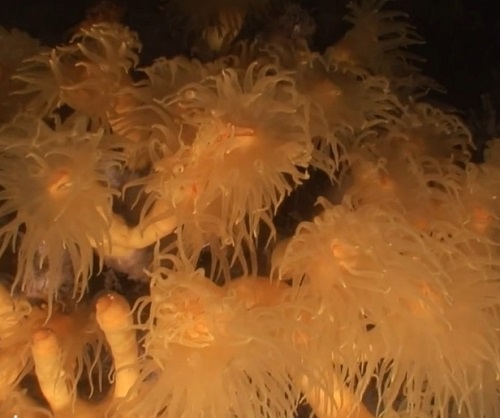 A scientific team has found in La Fonera canyon, also known as the Palamós canyon, deep-water coral communities, a marine ecosystem which is very vulnerable to human activity. The findings are explained in an article published in the magazine PLOS ONE signed by the researchers Galderic Lastras, Miquel Canals and Anna Sánchez Vidal, from the Research Group on Marine Geosciences (GRC) from the Faculty of Geology of the UB, together with Enric Ballesteros (Blanes Centre for Advanced Studies, CEAB-CSIC) and Josep-Maria Gili (Institute of Marine Sciences, ICM-CSIC).

These kind of corals create fragile and branched colonies, which boost marine biodiversity related to their relation to the life cycle of lots of marine organisms. Photo credit: Research Group on Marine Geosciences (GRC)

Cold-water corals, known for ages by the Norwegian fishermen, have been observed in different latitudes around the world, and are considered to be the cold-water “cousins” of the coral reefs from tropical regions. These kind of corals create fragile and branched colonies, which boost marine biodiversity related to their relation to the life cycle of lots of marine organisms.

The first cold-water coral communities discovered in the Iberian Peninsula were found in 2010 in the Avilés canyon, in the Cantabrian Sea. In the west Mediterranean sea, teams of the University of Barcelona and CSIC had found living colonies in Cap de Creus canyon, a scientific finding that represents one of the best documented examples of this kind of deep ecosystem in all the Mediterranean.

It is estimated that the new communities which were discovered by the research team in La Fonera canyon – at 130-370 m water depth- lie around 400.000 square meters. Video images testifying the discovery were obtained using a submarine remotely operated vehicle (ROV). In this specific submarine habitat, the most abundant species are Madrepora oculata corals (white coral) and Dendophyllia cornigera (yellow coral). “These new habitats expand the cold-water coral province of the northwest Mediterranea to the south even more than before: they had been seen in the Cap de Creus canyon and other canyons in the Gulf of Lion” said the teacher Galderic Lastras, main author of the article and member of the GRC on Marine Geosciences.

La Fonera canyon, outside the Catalan coast waters, shows a very abrupt terrain, with great depths near the coast. The north part of the canyon, where trawling is usually done, shows a softer terrain compared to the southern part, which is more abrupt. Like Professor Miquel Canals –head of Research Group on Marine Geosciences of the UB- said, “Trawling greatly modifies the submarine terrain so the landscape goes from having a cliff terrain to having a benthic terrain shape, following isobathic or level curves”.

These cold-water coral communities have been found in the most harbor-like northern areas. They show clear symptoms of human impact. “The bigger coral colonies are in areas which are inaccessible for trawling, like vertical walls and abrupt areas, where there is also Corallium rubrum (red coral). However, these coral colonies are usually shattered with fishing gears and plastics or partially covered by sediment, especially the ones closer to areas where trawling is practiced” warns Galderic Lastras.

“In this sense –he continues-, even though dragging areas, which have muddy depths, there are not these kind of communities, the sediment re-movement due to fishing gears can affect these vulnerable habitats, which are the home for special commercial interest, actually”.

New Exciting Creatures Discovered on the