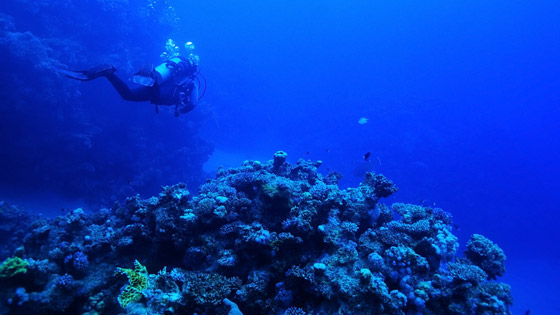 A chance conversation with a marine archaeologist friend led to Charalambos Poullis joining a dive in Cyprus. The experience revealed the difficulties faced by underwater archaeologists, and set in motion a thought process that would lead him to apply for EU research funding and subsequently develop software enabling archaeologists to reproduce underwater artefacts.

Ruins and sunken cities, ancient ports and shipwrecks – while these sound like the setting for a children’s novel, these various scenes do all exist off various European coasts. Although these hidden treasures have been preserved to some extent over the centuries, much would have been lost without the dedicated work of marine archaeologists.

It is their job to protect our underwater cultural heritage, and this is no easy task.

“I am a scuba diver myself, so during the dive I witnessed first-hand the amazing work (both excavating and documenting) that the marine archaeologists do, but also the difficulties that they face,” says Poullis. Alongside changing currents and a lack of light, these archaeologists have only limited time on the sea bed to excavate or examine items of interest, and almost all documentation is entirely manual.

Shedding new light on ancient relics
Pouillis’ vision was to use computer analysis and graphics to overcome these limitations and reproduce 3D images of the sunken treasures. His approach uses ‘structured-light-scanning’ – lights are shone onto the object and project a line of illumination that can be captured by cameras and used to create a 3D representation.

This technology is not new, but has limitations in its existing form. “There is no available software which can achieve a high level of accuracy, has limited to no restrictions, and has a straight-forward procedure to set up; let alone be used in a set-up where minimal interaction is required,” explains Poullis. His version, built using new code and datasets, would be easy to set up, produce high-quality models and require a single software installation.

A first prototype outperformed professional scanners costing in the range of €50 000 and was made available online for free. But Poullis was not yet satisfied – the prototype required that everything surrounding the relic remained motionless for at least 20 seconds.

“Although this can be guaranteed in lab conditions – we had set up a large aquarium in the lab where we were doing our tests – this is not the case in an underwater environment, where everything is dynamic,” Poullis explains, referring to changes in visibility, particles in the water and fish. The first prototype also required a customized case so that it could be used underwater, and this was expensive.

If at first you don’t succeed…
Prototype no. 2 followed the same principle, but thanks to a high-end, high-speed camera (1 000 frames/second), the processing of images was 34 times faster, making any movement less visible. “This allowed us to capture the entire set of images at the blink of an eye,” says the researcher. But while the system worked well for small objects, the lower resolution could not provide clear images of larger objects.

The team could have invested in an even more expensive camera at this stage, but rejected this option – “only a handful of people use high-end, high-speed cameras. Just to give you an idea, their prices range from €50 000 to €150 000 for a single camera, so you can imagine the cost,” he says.

The third and final prototype uses an array of cameras and lights, and is also more energy-efficient than its predecessors. It is easy to set up and can be easily adapted for underwater scanning.

The project was made possible thanks to a ‘reintegration grant’ under the EU’s Marie Skłodowska-Curie program that brought Poullis back to Cyprus following a PhD in the USA. He feels that the grant played an important role in his reintegration, as well as in advancing his academic career. He adds that the project would not have been possible without marine archaeologist Anna Demetriou, or head of excavation Stella Demesticha.

The EU funding also made it possible for Poullis to employ a number of researchers locally – “So in a way it also helped the career advancement of all the researchers involved,” he says.