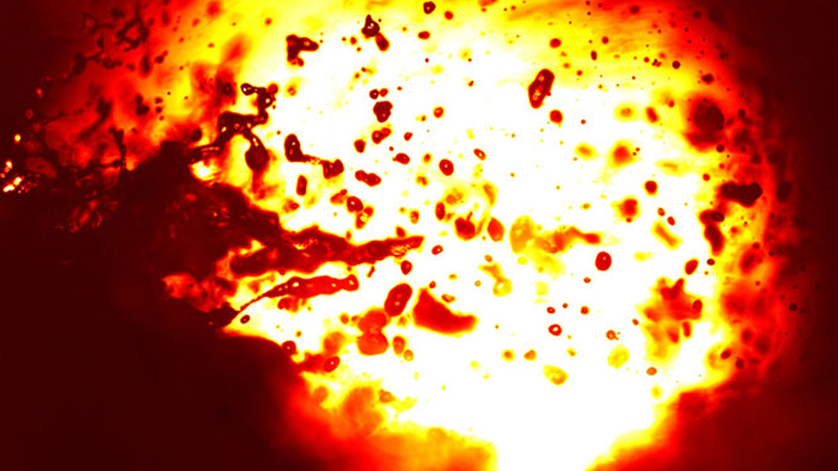 A University of Miami (UM) Rosenstiel School of Marine and Atmospheric Science research team is studying sea spray to help improve forecasting of hurricanes and tropical cyclones. In a recent study, the scientists found that in high winds conditions the amount of large sea spray droplets (over 0.5 milimeters in diameter) generated is as much as 1000 times more than previously thought.

Sea spray droplets are aerosol water particles that are ejected into the atmosphere as waves break at the ocean surface. The evaporation of sea spray is thought to contribute to the transfer of heat from the ocean to the atmosphere, which accelerate winds in a storm, potentially impacting its intensity.

To characterize the role these large droplets play at the air-sea surface, the researchers placed a high-resolution camera system outside of the Air-Sea Interaction Saltwater Tank (ASIST), one of the wind-wave basins in the UM SUSTAIN laboratory, to capture the silhouettes of water droplets flying through the air. For each image, an automatic identification algorithm was used to identify an individual droplet’s location in space and their two-dimensional surface area. More than 35,000 individual images were acquired and processed for this study as part of the experimental trials. The wind speeds in the laboratory ranged from 80 to 120 miles per hour.

“Our work can be directly applied to a hurricane model to help improve hurricane intensity predictions, which will help people make more informed decisions with regard to their safety,” said David Ortiz-Suslow, a Ph.D. candidate at the UM Rosenstiel School and lead author of the study.

Over the last 10 years, scientists have made significant progress in predicting the track of tropical cyclones up to 72 hours. Three days before Hurricane Katrina made landfall in New Orleans, the National Weather Service predicted the hurricane would hit the Florida Panhandle, approximately 250 miles away. This year, Hurricane Matthew’s actual verses predicted paths were less than 50 miles apart in the 72-hour window. Intensity forecasting has not improved as sufficiently over the last 10 years.