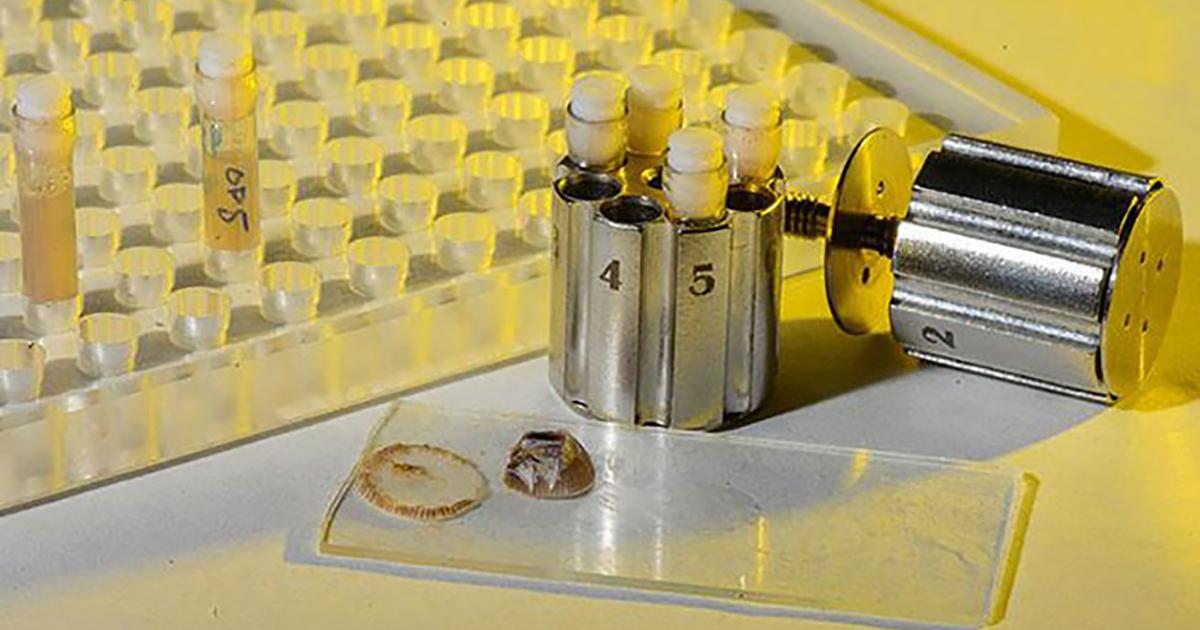 Researchers at the U.S. Naval Research Laboratory developed a new method for identifying the glue proteins that barnacles produce to adhere to ship hulls and other surfaces.

The new method, featured on the cover of the May issue of Integrative Biology, is faster, safer, improves efficiency of samples and yields more effective results than traditional methods. Researchers hope the discovery will lead to new solutions for dealing with the accumulation of barnacles on ship hulls, which hinders Navy operations by creating drag and increasing fuel costs.

“We are developing a new way to actually study the adhesive to see what it is composed of,” said Janna Schultzhaus, research biologist and National Research Council Postdoctoral Associate at NRL. “Before we can develop something that will work against it, we have to know what it is.”

These small but mighty crustaceans create a cement-like adhesive layer that is difficult to remove once applied. The adhesive layer, called barnacle glue, is made of proteins that have remained mysterious to researchers. Researchers believe identifying the proteins is the first step toward understanding the glue, and ultimately developing materials to effectively combat the glue’s adhesive qualities.

“If we can figure out how to make them not attach as well, they will be easier to remove or [ensure] they just won’t attach,” Schultzhaus said. “That would save the Navy a lot of money.”

Researchers have used solutions like toxic hexafluoroisopropanol to dissolve the glue and identify proteins. The problem with that method is that not all of the glue fully dissolves. That means that while researchers are able to identify some of the glue’s proteins, they have no way to identify the proteins in the remaining undissolved glue.

“Imagine if you have a lot of salt and you put it in the water,” said Dasha Leary, NRL research biologist “Not all the salt will dissolve. But if you want to study all the salt you need to either add more water or come up with a different way of dissolving it. That’s kind of how these guys are. We have chunks of the proteins, but we need them all broken down in the solution to be able to study them.” 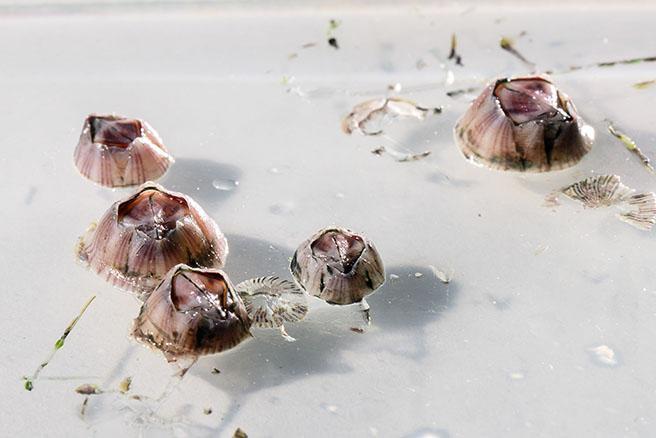 Barnacles grown on silicone substrate used at the U.S. Naval Research Laboratory for scientific experiments at Washington, D.C. August 2, 2019. The barnacles use a proteinaceous glue to tenaciously attach to numerous surfaces, including ship hulls, making them a nuisance to the Navy. (U.S. Navy photo by Jonathan Steffen)

Schultzhaus and her fellow researchers designed a study to test how well their barocycler machine, a laboratory instrument used to subject specimens to cycles of pressure, could break down the proteins with three separate test solvents. The machine worked by continuously applying and releasing high pressure on the samples.

In the study, researchers identified more than 80 proteins, about double the number identified in previous studies. After they characterized the proteins, they discovered several enzymes, which Schultzhaus believes may play a role in the production of glue, the transport of proteins, or in the support of the barnacle molting process. She hopes future studies will reveal the purpose of each.

The pressure cycling technology also allowed the researchers to use smaller samples and get results in a shorter time compared to traditional solvent-soaking approaches.

“We can do 16 samples at a time while before we could do only one sample and we had to pull several barnacles together to get enough material to study it,” Leary said. “Here we can look at material from a single barnacle and tell the individual differences better. It could take several days to get the results with the old process because there were extra steps.”

NRL’s barnacle team believes developing novel ways to extract proteins will be critical to understanding how barnacles interact with the environment and, ultimately, how to keep them from attaching effectively.

“We now have a controlled way to break the glue down and see what’s there and what’s changing,” Schultzhaus said.

Their findings also have implications for the medical community. According to Schultzhaus, medical researchers can use this technique to study similar substances, like plaques formed during disease.

Complete details of the collaborative research by NRL's Center for Bio/Molecular Science and Engineering Division and Chemsistry Division can be found in the June 28, edition of Integrative Biology (doi.org/10.1093/intbio/zyz020).