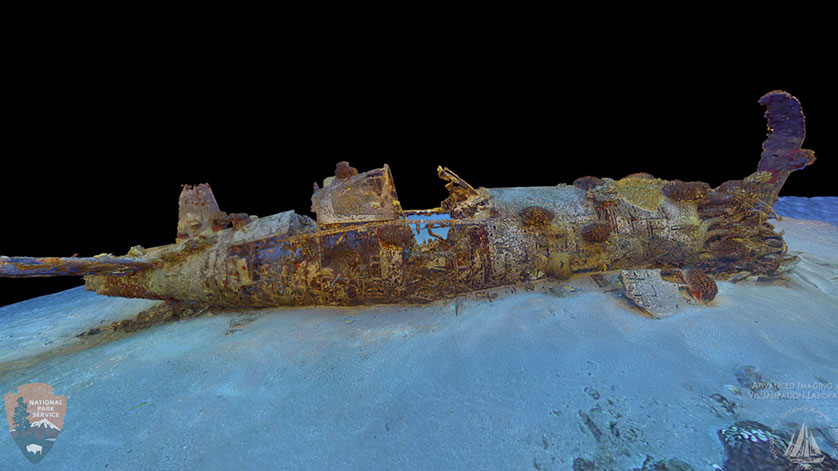 "These new imaging systems can visualize wide areas of the seafloor and shipwreck sites at optical resolutions not previously obtainable and represent a real paradigm change in our ability to image and interpret objects and features on the seafloor," says William Lange, director of the AIVL.

The cutting-edge technology will enable rapid production of 3-D optical volumetric models of the seafloor—images that scientists can spin to view from all sides, and zoom in on to visually explore around and inside objects or ocean environments. These models are helping to transform the way scientists examine study areas, such as coral reefs, marine protected areas, maritime heritage sites, and even hazardous material sites.

Developed by AIVL in collaboration with the National Park Services Submerged Resources Group and Marine Imaging Technologies, the near-millimeter accurate 3-D models are built using digital optical imagery, rather than lasers. Unlike 3-D images, which enable a static view in three dimensions, these models are able to represent the volume of an object from all sides with high-resolution, allowing, for the first time, visual exploration at scales approaching what humans see in air. 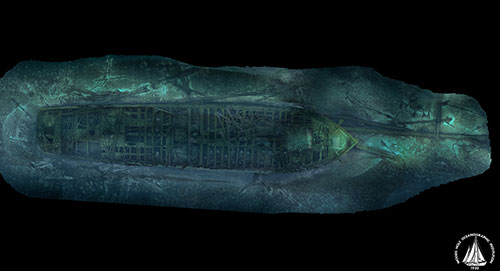 Image of a 3-D optical model of the Rouse Simmons, a schooner that sank of Lake Michigan in 1912 during a violent storm. The ship, carrying a cargo of Christmas trees, was headed to Chicago. (Phot by The Advanced Imaging and Visualization Laboratory, Woods Hole Oceanographic Institution.}

"This new technology will enable us to virtually explore underwater worlds, such as those around hydrothermal vent sites," says Lange, "and help us better understand the structure and longevity of submerged objects, such as pipelines and sunken maritime heritage sites." Currently, 3-D models take months of processing back in the lab. But the new underwater imaging system will make the models possible in shorter periods of time—even during expeditions at sea.

"This is really exciting because the deep sea is a realm with very limited access," says Tim Shank, a deep-sea biologist at WHOI. "Even when scientists are able to dive in a submersible, like the Human Occupied Vehicle Alvin, we typically have just a few hours on the seafloor per day. Due to the great pressures that increase with ocean depth, it's impossible to step out of the sub and experience the terrain and its thriving ecosystems in three dimensions." "These high-resolution 3-D models will allow us to visually walk through the seafloor landscape among the biological communities that live there, much like a wildlife biologist would walk through a rain forest," adds Shank, who plans to collaborate with AIVL to generate 3-D models of deep-sea coral ecosystems off the coast of Colombia during an expedition there later this year.

Typically, after a research expedition at sea, scientists spend weeks reviewing still images and video gathered by underwater vehicles or other instruments. Lange says the new models will help streamline the process of interpreting data.

"Instead of having to look at hundreds of thousands of individual images, scientists can examine a single high-resolution 3-D optical model," Lange says. "It allows them to see depth, scale and context, which is what most scientists like about being able to dive in a manned submersible, such as Alvin."

"When you're looking at a 2-D image, your brain has to do a lot extrapolating to fill in the details," adds Maryann Kovacs, a technician at AIVL. "These models do the work for you." By being able to incorporate 2-D optical data gathered from previous missions, the models also allow researchers to see how a site has changed over time. For example, the methodology is already being applied to the continued time-series and archaeological site assessment efforts at the RMS Titanic Maritime Heritage Site.

AIVL has begun conversion of the lab's 2-D optical mosaics of the Titanic site, which were created in 2011. The lab will also incorporate newly-acquired imagery from the legendary wreck site that still captures the public's imagination more than 100 years after the luxury liner sank on its maiden voyage.

"We can learn things from the Titanic site about what happens to ships in the deep sea over time," Lange says. "There are very few places on the bottom of the ocean that we have a 25-year history of what’s happened there. And these 3-D optical models will allow people to see it as they never have before."

In addition to benefitting science and research, Lange says the technique is a generic tool with a large number of possible applications in everything from education, film production and industry.